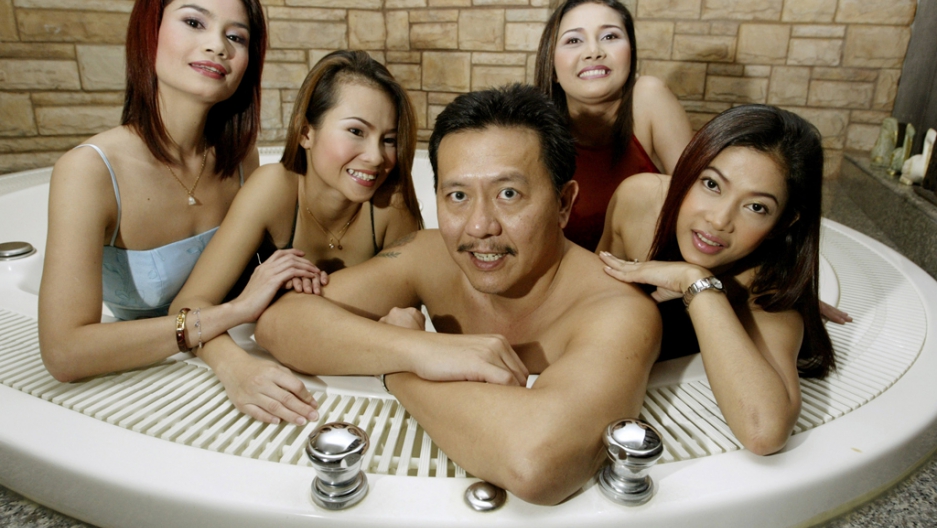 BANGKOK, Thailand — Voters who headed to the polls for national elections here in Thailand on Sunday were promised a laundry list of goodies from various political parties. These include new tablet computers for students, credit cards for farmers, a 40 percent minimum wage hike, high speed railway projects, and more.

But in a twist that is emblematic of the Southeast Asian nation’s unconventional political environment, a man who built his fortune through several high-profile brothels — and who greased the wheels of his empire by bribing crooked police offers — offered constituents just one thing: to fight wholeheartedly against the country’s rampant culture of graft.

“Corruption in Thailand has become the standard,” says 49-year-old Chuvit Kamolvisit, his signature white button down shirt soaked through after a rainy nighttime campaign rally in central Bangkok. “People in Thai society haven’t realized that it’s a big problem.”

Citizens “pay bribes because they think they need to, and they still keep quiet…so the system still goes on,” Chuvit says. The practice has become deeply engrained, but it’s time for that to change. “What I can do is speak up. I want everybody to speak up.”

And judging from election results, Chuvit and his Rak Thailand — "Love Thailand" — Party are onto something. They garnered four seats.

Indeed, it is common in Thailand for people from all strata of society to avoid official punishment for minor traffic violations, as well as more serious offenses, by offering police cash payments to look the other way.

According to the 2010 Corruption Perceptions Index report, issued by Berlin-based Transparency International, Thailand ranks 78 out of 178 countries. That means it is thought to be worse than the likes of Namibia and El Salvador, but slightly better than countries like Liberia and Guatemala.

A recent editorial in Bangkok’s Nation newspaper said that “The problem of graft is so deep-rooted” in Thailand that “we can only hope to eradicate it by educating kids from an early age.”

To be sure, the burly, mustachioed Chuvit knows something about the practice. Until several years ago, he owned six well-known “massage parlors” — fronts for brothels — in Bangkok with evocative names like Emmanuelle and Victoria's Secret. The establishments, which are common in some parts of Bangkok, had signs advertising services like “soapy massages.”

Inside, visitors could take their pick from among rows of women wearing number tags. Chuvit came to be known as the “King of Commercial Sex.”

Prostitution in Thailand is technically illegal, but law enforcement officials often receive kickbacks, allowing the practice to flourish. In its 2009 human rights report on Thailand, the U.S. State Department said various groups estimate that there are between 200,000 and 300,000 sex workers in the country.

In 2003, however, Chuvit blew the whistle on his law enforcement contacts, saying he had been paying nearly $300,000 per month in bribes but that police failed to back him up in a land dispute. He said he had given police complimentary services at his parlors, and even kept a collection of Rolex watches to give as gifts.

But that’s all in the past, Chuvit says. He has sold his old businesses and bristles at questions about his former endeavors, maintaining that he wants to focus on building his political career. He was elected to Parliament in 2005 but was later disqualified. He also launched two failed bids as Bangkok governor. A low point came when he punched and kicked a TV journalist who he says insulted him.

Chuvit is gunning to be an opposition member of the new government, heading his new party, called Rak Thailand, which means “Love Thailand.” His image is that of a business bigwig with a common touch fighting for the rights of the average Joe. He says corrupt police should do jail time.

“A lot of people see” Chuvit “as a joke, but his election strategy is brilliant,” says Pavin Chachavalpongpun, an expert on Thai politics at Singapore’s Institute of Southeast Asian Studies. Chuvit has picked timely issues, “like corruption and changing the government,” though Pavin adds that the exercise may ultimately be one in large-scale self-promotion. Still, Chuvit’s campaign “shows how ironic Thai politics can be,” says Pavin. “You need a con man to tell you not to do bad things.”

Chuvit has attracted attention partly due to his memorable campaign posters, no easy feat in a city currently plastered with myriad political advertisements. In one poster, he scowls at the viewer, aiming to embody the frustration of his constituents. In another, he holds an unhappy looking baby. The text says that politicians “need changing” too, just like diapers.

In yet another poster, he clasps the paw of his beloved bull terrier, named Moto Moto. The message, he says, is that dogs are more loyal than people.

Always one to take advantage of a photo opportunity, Chuvit even recently participated in the Internet fad of “planking” by posing for a picture while lying face down on a bridge railing.

His experiences in the Bangkok underworld aren’t the only ones that inform his worldview. The 49-year old says he attended North Carolina’s Campbell University. In addition to learning about the importance of individuality and the need to question authority, he says he gained insight on gender relations during his time in the U.S.

He was married to a Canadian woman who made him take turns washing dishes. “I said, this is democracy in the house,” he notes, laughing. (He adds, as an aside, that by comparison, this is why some Western men like Thai women. “They never argue or say no.”)

If elected prime minister, would members of Thailand’s predominantly male Parliament respect the front runner, Pheu Thai party leader Yingluck Shinawatra, a 44-year-old woman? No, says Chuvit — but not because she’s a member of the fairer sex. Rather, the politicians “don’t even respect one other,” much less Yingluck. She is a “puppet” for her elder brother, exiled former prime minister Thaksin Shinawatra, who lives abroad to avoid charges for — you guessed it —corruption. (Thaksin says the charges are politically motivated.)

Much of Thailand’s national campaign has pitted Thaksin against caretaker prime minister Abhisit Vejjajiva, whose parties have been involved in ongoing mudslinging. What would Chuvit say to Thaksin and Abhisit if he could bring them together face to face? “Let’s have a drink,” Chuvit says, grinning.

At his recent campaign rally, the monsoon rains didn’t deter his supporters, many of whom were in their twenties. They danced to loud rock music and chanted “number five,” for Chuvit’s party list number. There were also families with small children in attendance, some of whom held his distinctive campaign posters above their heads for shelter.