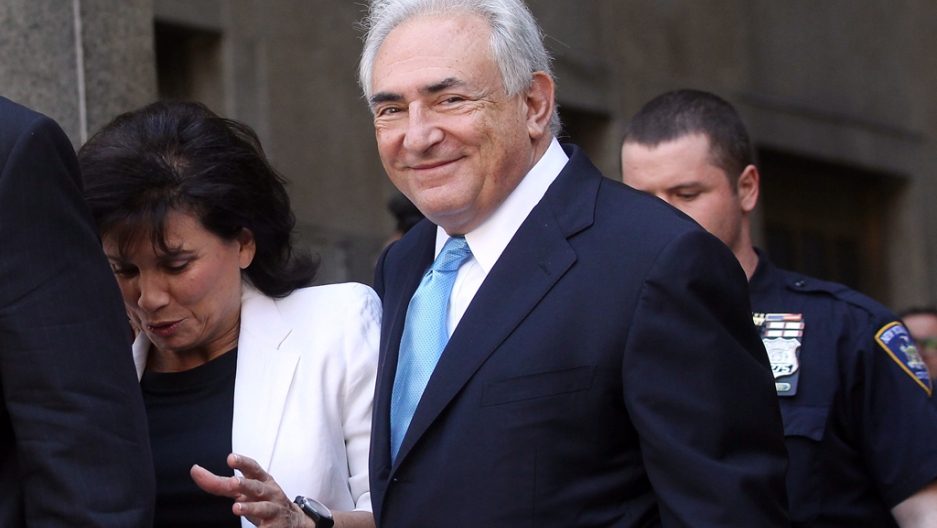 PARIS, France — Dominique Strauss-Kahn is again splashed across front pages, but this time he is beaming in a bespoke blue suit with silk tie. And his cuffs are French.

In what the daily Liberation called, “DSK: Season Two,” the might-have-been president appears likely to emerge as a libido-challenged predator but not as a rapist.

Although Strauss-Kahn must still face a judge on July 18, he is now free within the United States. State prosecutors admitted that their case is full of holes.

You could almost hear the sigh of relief across France. In a society that appreciates seduction, forbidden fruit is back in the bowl.

The case touched off a national conversation about male sleaziness and over-the-top harassment. Still, sex is in the culture. On TV, bare breasts sell soap. Nightclubs where flirtation leads to group sex flourish in France.

“This is an Anita Hill moment,” author Elaine Sciolino told me. “I don’t think it will be business as usual again. But compliment a woman’s perfume, how her skirt flows, that’s not going to change. Seduction is not criminality.”

Her new book, "La Seduction,"was inspired when she interviewed Jacques Chirac for The New York Times. As French gentlemen are wont to do, he kissed her hand.

It seems clear Strauss-Kahn did much more than that in his posh Sofitel suite. His defense says it was consensual. Evidence suggests a possible business transaction.

Prosecutors who depicted the victim as a virtuous and pious immigrant from Guinea now say she banked $100,000 for a boyfriend imprisoned in Arizona for drug dealing.

When they finally found someone to translate a tapped phone call in a dialect of Fulani, they heard her tell him not to worry because Strauss-Kahn was rich.

In a frank letter to the defense, prosecutors say the victim lied to immigration authorities in 2004 about how she was raped in Guinea, part of a string of falsehoods.

Her story changed as she described what happened at the Sofitel. Meantime, detectives found Strauss-Kahn did not race for the airport from the hotel as charged. He stopped to lunch with his daughter.

Even if charges are dropped, Strauss-Kahn is hardly likely to run for president next May. Yet if the Socialists win, he could be finance minister. And he is only 62.

At the Alma Saturday market, a typical slice of bourgeois and workaday life, the judgment was harsh on New York prosecutors.

If he is guilty of any of the charges, many agree, he should be punished even if the victim might not be a saint. Most, however, now add grains of salt to what they hear.

Gerard Bisset, a grand-scale fruit and vegetable seller, knows what he believes: “It’s obvious. He paid, and she didn’t think it was enough.”

Julie Trinh, one of his vendors, nodded. She is Laotian-Chinese, in Paris since 1980. Beautiful, she evades frequent male appreciation with studied shyness.

“It happens, people pay for sex,” she said. “Here we even have women who pay for sex with younger men — koo-gars.” Without the French inflection: cougars.

Jacky Lorenzo, a fishmonger who looks a bit like DSK, staged a playful reenactment for a passing camera crew. He grabbed Irene Dohe, who cooks specialties from her native Ivory Coast, down the coast from Guinea. He mocked a kiss on her cheek. She laughed and twisted away.

“What happened is known only to the two people in that room,” Dohe said. “We can’t judge.” Still, she is not convinced by the official version. “A maid should not have been in there alone with a man. I think she could have avoided that.”

Lorenzo shook his head in disgust at the whole process, from the swift arrest and humiliating perp walk to the now-questionable details released to reporters.

“They have assassinated him,” he said. “Whatever happens, he is soiled for the rest of his life. Maybe he did something, but it wasn’t murder. It is still possible he will end up in prison with those hardened convicts.”

Lorenzo agrees that fresh debate over how men and women deal with one another in France could lead to some changes. Still, he does not expect much.

“If that had happened here,” he concluded, “no one would have ever heard about it.”