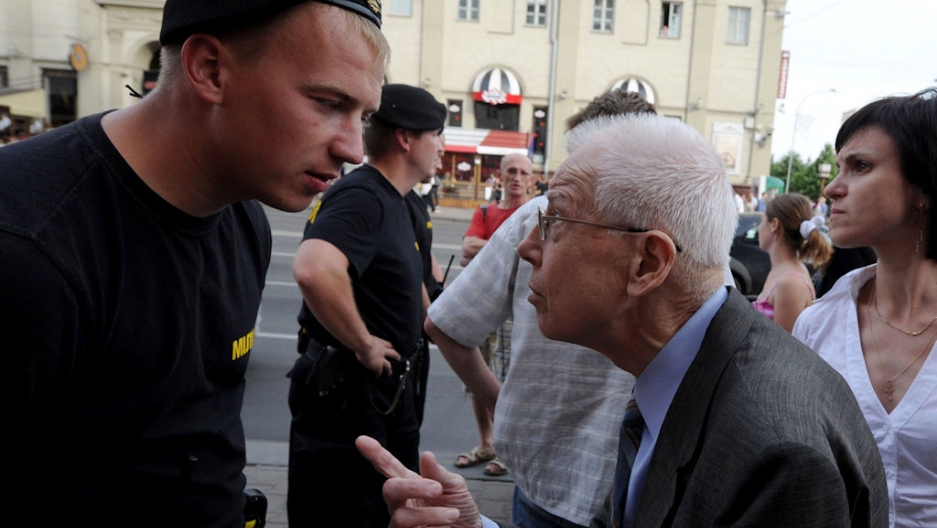 A man argues with a Belarusian police officer blocking access to an area where a flash mob planned to gather in the center of Minsk on June 15, 2011.
Credit: Viktor Drachev
Share

Editor's Note: The vKontakte webpage — detailed in this article — and dedicated to the Belarus demonstrations has now been blocked by the site's administrators because "some users believe that the page does not correspond to the site's rules."

Weeks of flash-mob “silent protests” in the capital Minsk and throughout this former Soviet republic of 10 million have left authorities edgy and lashing out at any perceived threats.

The idea behind the rallies is straightforward and elegant: People simply gather in main squares around the country, stand silently and clap.

Since any public opposition to President Alexander Lukashenko’s hardline government is met with crushing repression, organizers have tried to create a form of protest that contains as few overtly political elements as possible — a non-protest protest, so to speak.

The demonstrators mill about the designated spot as if they are just taking an evening stroll or chatting with their friends. Then at the appointed hour — seven o’clock in the evening every Wednesday — they start clapping.

And the rallies have an added, entirely unprecedented, aspect: they are being organized anonymously through social networking sites like Facebook and its Russian equivalent vKontakte. Authorities have struggled to track down the leaders and take the page off the internet, but to no avail.

The organizers’ page on vKontakte is called “Revolution through the social network.”

“The revolutionary hurricane has spread throughout the world,” the site says. “Now Belarus has found the recipe of revolution through social networks. The goal of our meeting is to overcome fear and begin to act!”

Public discontent in Belarus has grown ever since the government, faced with a severe shortage of dollar and euro reserves, was forced to devalue the national currency, the ruble, by nearly 60 percent. Peoples’ salaries and savings were slashed, and prices skyrocketed overnight.

The protests are now in their fourth week and have grown steadily. What started out as a few hundred people in Minsk has increased to a reported 3,000, and spread to other towns and cities.

Lukashenko has promised to snuff out the actions.

“We have the opposition in Minsk on social networks,” he said. “They use the internet to call for strikes. I will look and watch, and then I will strike hard so that they will not get a chance to defect abroad.”

Despite the fact that the demonstrations are more symbolic in nature, and too small to be called a mass movement, they have visibly thrown the authorities for a loop.

For this week’s demonstration, police cordoned off and set-up an impromptu “free disco” on Minsk’s main October Square. Then as the anti-government crowds formed, toughs in civilian clothes — believed to be associated with the state security service, the KGB — attacked and apprehended participants, who were thrown into unmarked busses, beaten further and then driven away. Journalists were also attacked, including a film crew from the BBC.

Human rights activists said that 13 protesters were sentenced to between six and 15 days in jail, and 17 were fined between $20 and $175. After the third week of protests some 450 people were reportedly arrested for a short period and then released.

With Belarus’s Independence Day celebrations approaching this Sunday, both sides are gearing up for a major confrontation.

Rally organizers describe a three-staged protest on their vKontakte page. First, demonstrators are supposed to get as close as possible to the official tribune during the official ceremonies. There they are supposed to break into applause as President Lukashenko begins his speech.

“We will not stop until he ends,” the site reads. “In this way he won’t be able to give his speech normally.”

Two more clapping events are also planned, but will be announced one hour before they are to take place.

And so Belarus officials have taken the extraordinary step of dictating when members of the Independence Day crowds can and cannot applaud. “Citizens won't be detained on July 3, if they don't disturb public order,” said Igor Eseev, Minsk’s police chief for public security.

“If [applause is] for our veterans or servicemen — then of course, it is allowed,” he added, as quoted by the Russian news agency Interfax.