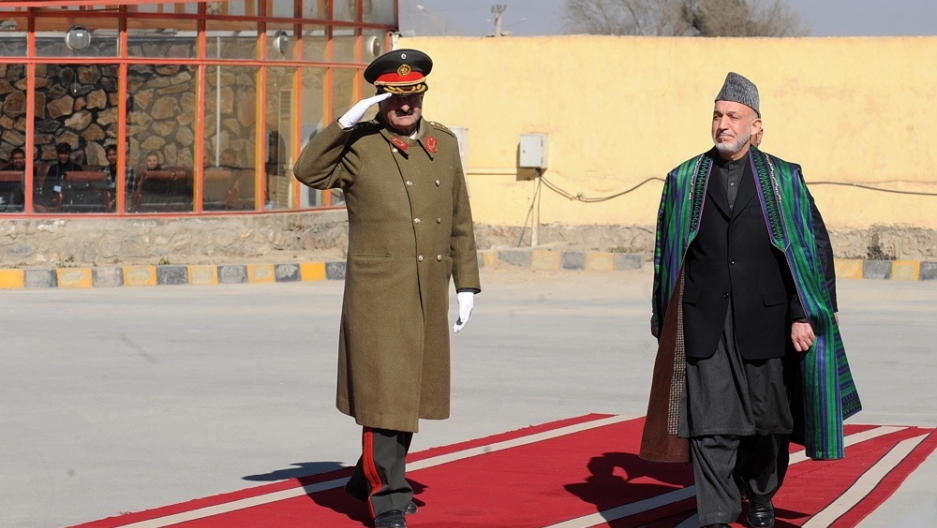 The recent attack on the Intercontinental Hotel in Kabul has obscured a less spectacular, but equally important, news item: the imminent demise of any pretense of democracy in troubled, volatile Afghanistan.

It was always a long shot for a country plagued by decades of war, staggeringly high illiteracy rates and rampaging corruption to transform itself in a few short years into a model state. Afghanistan, as U.S. leaders never tire of saying, is not Switzerland. Instead of aiming for the moon, they say, we should learn to settle for “Afghan good enough.”

Over the past week, there has been a few worrying glimpses of what that actually means.

The Kabul Bank crisis has reached absurd proportions, with what amounts to the defection of Afghanistan’s Central Bank chairman, Abdul Qadir Fitrat. He claimed asylum in Virginia, saying that his life was in danger back home for trying to expose the true culprits in a $900 million Ponzi scheme that is threatening to topple Afghanistan’s already fragile economy.

Prominently implicated in the fraud were the brothers of Afghanistan’s president and vice president. Fitrat had told Parliament that Mahmoud Karzai and Haseen Fahim were among the guilty before an “independent” commission — headed by Azizullah Lodin, the same man who helped Karzai manipulate his presidential election in 2009 — cleared them of any wrongdoing.

The Afghan government has now issued a warrant for Fitrat’s arrest, saying that he accepted millions in bribes to overlook the crisis. Previously, the Afghan president had tried to shift the blame for the debacle to the foreign firms that were trying to oversee the bank, saying they had failed in their duty by not preventing the fraud.

In the meantime, the International Monetary Fund has frozen aid to Afghanistan’s infrastructure, making it likely that the government will be bankrupt within weeks.

At the same time, the Afghan Parliament is in an uproar over a ruling by a Special Court that may disqualify up to a quarter of the country’s lawmakers for fraud in last September’s elections. The Special Court has no legal standing, according to most international experts and even the majority of Afghan officials still able to render an independent opinion.

Nevertheless, the Court, backed by the president and his judiciary, is determined to enforce its ruling. Parliament is equally determined to resist, with the prospect of major demonstrations on the streets of Kabul within the next few days.

The political opposition is joining the Parliamentarians in calling for a boycott of the Court’s decision. Amrullah Saleh, former intelligence chief and vocal critic of the government’s efforts to make peace with the Taliban, has vowed to support the legislature.

But the Parliament has more to worry about than the Special Court. President Hamid Karzai is in the process of convening a Loya Jirga, or Grand Assembly, which he has promised to consult on the issue of permanent U.S. bases in Afghanistan. The Jirga was originally scheduled for July, but now has been postponed until September.

According to the Constitution of Afghanistan, a Loya Jirga can be called “to take decision on the issues related to independence, national sovereignty, territorial integrity, and supreme interests of the country; to amend the provisions of this Constitution; and to prosecute the President” for crimes against humanity or for national treason.

The Parliament’s position is that the issue of permanent U.S. bases does not fall into any applicable category.

“The decision-making body for strategic treaties with foreign countries is the Afghan Parliament, not a Traditional Loya Jirga,” said Farkhunda Zahra Naderi, a lawmaker from Kabul province. “The government should work to strengthen legal bodies rather than establishing illegal and tribal entities.”

“In my opinion, decision-making over the establishment of permanent U.S. bases does not need a Jirga,” he said. “The government has to prepare a draft of the agreement and send it to the Parliament for ratification.”

The fact that the president has chosen to ignore the Parliament and appeal to a more traditional structure is bad news for democracy in Afghanistan, Saiqal added.

“President Karzai has been trying to strengthen tribal structures against the legal entities and civil society forums over the past 10 years,” he added. “This act of the government has resulted in a weakening of the democratic process and rule of law in Afghanistan.”

In addition to substantive problems with the Loya Jirga, the president cannot even comply with the Constitutional provisions for its composition: a Grand Assembly, according to the Constitution, must include, in addition to the two houses of Parliament and the heads of provincial councils, the chairpersons of district councils. In the past 10 years, Afghanistan has been unable to adequately draw district lines, or hold elections for district councils.

There are 102 members of the Upper House of Parliament, or Meshrano Jirga; the Lower House, or Wolsi Jirga, has 249. There are 34 provinces, thus 34 Provincial Council heads, and nearly 400 districts.

Most likely Karzai would do what he has done in similar situations — he would just appoint the district council members from among his own set of loyalists, giving him virtual control over the Assembly.

The ostensible justification for the Jirga — consultation on permanent U.S. bases in Afghanistan — does not hold up to close scrutiny. For one thing, both Secretary of State Hillary Clinton and Defense Secretary Robert Gates have said that the United States is not interested in such bases.

Negotiations are proceeding, however, on the Strategic Partnership Agreement, which will lay out the framework for a continued U.S. presence in Afghanistan.

The talks are reportedly tough, with the Afghan president’s increasingly erratic rhetoric and behavior contributing to the difficulty. Karzai has been in rare form of late, alternately praising and excoriating the international troops. He has threatened a virtual jihad against foreign “occupiers” while expressing thanks for the sacrifice and assistance his government receives, without which it stands little chance of continuing.

The international community has made no secret of the fact that it is on the way out of Afghanistan. U.S. President Barack Obama said as much on June 22, when he announced that all of the 33,000 “surge” troops would be withdrawn from Afghanistan by next summer.

The Canadians are bringing most of their 2,900 troops home this year; the Dutch are already gone. The British and German forces may not be far behind, if domestic debate is anything to judge by.

So the NATO-led International Security Assistance Force (ISAF) may look very different even one year from now. By 2014, the scheduled date for completion of the security handover to Afghan forces, there may be very few foreign troops left, aside from a small contingent of trainers, advisors and special forces who will continue to conduct night raids and other “counter-terrorism” operations.

On Tuesday, the world got a foretaste of what things might look like once the international troops are gone. Nine attackers invaded the Intercontinental Hotel, killing at least 21 and destroying the once-iconic building in the process.

The combined Afghan security forces fought the nine attackers for hours, until ISAF helicopters finally had to be called in.

Most Afghans would agree that some international presence is necessary for the foreseeable future, however much they may resent the restrictions and dangers that come with the foreign troops.

While there may be some discussion and debate at the Loya Jirga on this issue, few expect that the Assembly will have any substantive power over the final outcome of the Strategic Partnership Agreement.

What many are expecting, instead, is a move by the executive branch to use the Assembly to amend the Constitution — specifically, the provision that limits the president to two 5-year terms.

Karzai is due to step down in 2014; if the present Constitution stands, he cannot run again.

“I am concerned that Karzai might ask the United States to give him more authority in future elections, to provide his team with more power instead of an agreement for the establishment of the bases,” Saiqal said.

“People can talk freely and declare their views about the government,” he said. “This shows that the Afghan government is committed to the principles of democracy and freedom of expression. A Traditional Loya Jirga is meant to find out the people’s will, and this is a democratic action.”

But so far Karzai has eviscerated anyone who might stand against him. The Parliament has been rendered toothless by the Special Court, whose power it has been unsuccessful in opposing.

The judiciary is independent in name only; reform of the judicial branch has been so slow and problematic that the international community has all but given up. Emphasis now is on “traditional justice” or tribal courts, in which largely untrained but supposedly highly respected members of the community help to settle local disputes.

If Karzai makes a move to amend the Constitution during the Loya Jirga, who will stop him?

The international community, with one foot out the door, may very well look the other way, as it did during the 2009 elections that reinstated Karzai, in spite of his never having won the 50-percent-plus-one majority necessary for the presidency.

Good reasons will doubtless be found: with the security handover due to be completed in 2014, this is not the time to be changing horses; there is no viable alternative; Afghanistan needs stability above all else. These, among others, were the justifications advanced in 2009 for not pushing more aggressively for a valid election.

The loser, in this case, will be Afghanistan’s “fledgling democracy.” But by then there may be very little trace of it left.