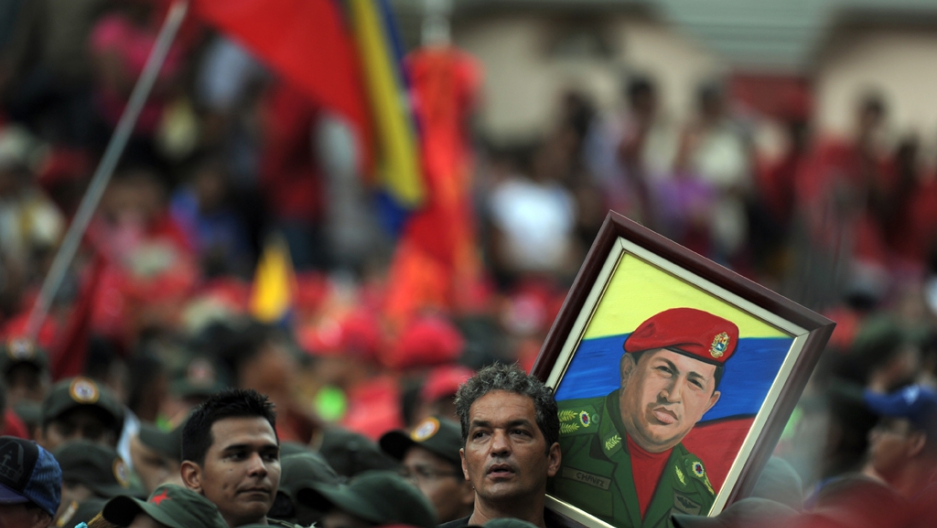 Supporters hold a portrait of Venezuelan President Hugo Chavez during the commemoration of the ninth anniversary of the failed coup against him.
Credit: Juan Barreto
Share

CARACAS, Venezuela – With his anti-American rhetoric and socialist policies, Venezuelan President Hugo Chavez symbolizes the overturning of the status quo. But amid the uprisings in the Middle East, Chavez has often sided with the region’s despots.

"Just because the whole world calls Gaddafi an assassin doesn't mean Chavez will call him an assassin,” Chavez declared. “That would be cowardly … . He's been a friend of mine and a friend of ours for a long time."

Chavez has described Syrian strongman Bashar al-Assad as a humanist and a brother. And he energetically backed President Mahmoud Ahmadinejad in 2009 amid Iran's disputed elections and anti-government protests.

Since he was first elected in 1998, Chavez has won legions of fans in the Arab world for breathing new life into OPEC, embracing the Palestinian cause and breaking diplomatic relations with Israel. So, his recent comments have disappointed pro-democracy activists in the Middle East as well as some ex-patriots from the region.

“This will greatly tarnish his image,” said Jamal Gandour, who was born in Lebanon but emigrated to Venezuela a decade ago. “In the Arab world Chavez had been viewed as the No. 1 revolutionary in Latin America.”

In an essay titled "Chavez and the Arab dictators," socialist author Lance Selfa writes that Chavez’s support of “Middle East despots who are trying to suppress popular uprisings is no way to build international solidarity.”

True, Chavez cheered the ouster of Hosni Mubarak, mainly because the Egyptian president was a staunch U.S. ally. But in following Winston Churchill’s maxim that “the enemy of my enemy is my friend,” Chavez has also forged close ties to some of the Middle East's most notorious leaders, including Gaddafi, Assad and Ahmadinejad.

Chavez has pledged to build an oil refinery in Syria and, for a brief spell, a Venezuelan airline has established a weekly flight between Caracas, Damascus and Tehran. A recent deal to sell a gasoline blending component to Iran prompted the U.S. government in May to slap sanctions on the Venezuelan state oil company.

Critics view Chavez as the Latin American equivalent of the oil-rich autocrats clinging to the status quo in the Middle East. They contend he has been spooked by the uprisings. Indeed, Chavez recently compared the rebellions to a 2002 military-backed coup that briefly ousted him from power.

By voicing support for pro-Gaddafi forces and Syria's crackdown on protesters, Chavez is sending a message to his own people, says political analyst Jose Toro. "What he is saying is: 'Don't dare to do anything like that here in Venezuela because I am not going to accept it,'" Toro said.

Still, Chavez has backed Gaddafi, Assad and Ahmadinejad for years. And in some cases, this support has more to do with geopolitics than personal sympathies. For instance, Venezuela’s alliance with Iran provides a pressure point within OPEC to fight the pro-U.S. positions of the Gulf oil monarchies.

This posture “is consistent with (Venezuela’s) willingness to challenge other U.S. global priorities, from support for Israel and wars in the Middle East to the U.S.-led free trade pacts,” Selfa writes.

What’s more, Chavez isn't the only leader with questionable allies in the Middle East.

In June, U.S. President Barack Obama welcomed the Crown Prince of Bahrain to the White House despite that country's fierce repression of pro-reform activists. Washington was also slow to discard Mubarak. The satirical newspaper The Onion summed up the eventual split with this headline: "U.S. Negotiating Mubarak’s Severance Package."

Despite serious concerns about Venezuela’s democracy — pro-Chavez politicians control all branches of government — Chavez has won a string of free elections. And despite the mystery surrounding his illness and medical treatment in Cuba, Chavez remains the favorite to secure another six-year term in next year’s presidential vote. After a dozen years on the job, opinion polls show that Chavez remains quite popular at home.

In fact, some of his staunchest supporters come from the half million people of Middle Eastern descent who live in Venezuela. On Fridays, some of them worship in downtown Caracas at the huge al-Ibrahim mosque that was financed by Saudi Arabia.

Mohamed Salem, who administers the mosque, arrived here from Egypt 10 years ago thanks to Venezuela’s liberal immigration policies. Salem’s visa applications for Europe were rejected. But Venezuela welcomed him and offered him citizenship.

Not surprisingly, he refuses to badmouth Chavez and his foreign policy. "Whether Chavez backs this person or that, I don't know anything about it,” Salem said. “That's politics and I can't to get involved in that."

Support for Chavez is also strong at a huge outdoor clothing market in Caracas which is dominated by vendors from the Middle East. Compared to their own countries, they see Venezuela as a land of political freedom and business opportunity. Some got their start here with low-cost government loans.

One such success story is Syrian immigrant Fadi Humsi, who sells sheets and towels at the market and is about to open his second store. "In Syria," he says, "if you don't have money, you can't start your own business. You have to be an employee. But here, if you want to work and get ahead, people help you."

But not everyone at the market is smitten with the Venezuelan president. Lebanese immigrant Charles Massad says that by siding with the bad guys in the Middle East, Chavez is showing his true colors.

"It’s because he wants to make Venezuela like a dictatorship,” Massad said. “That’s the reason he's with Gaddafi.”