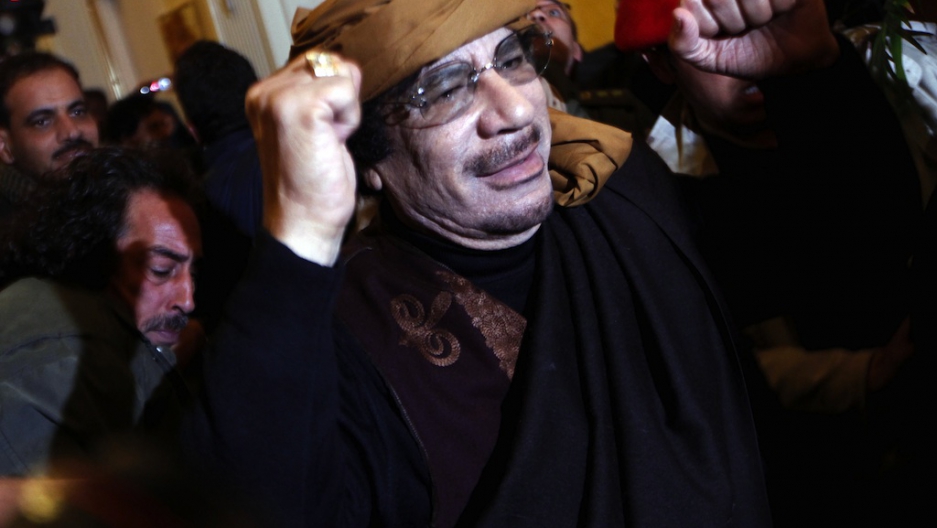 Libyan strongman Muammar Gaddafi gestures as he arrives at the Rixos hotel in the capital Tripoli on March 8, 2011.
Credit: Mahmud Turkia
Share

Not according to the results of the African Union summit that closed in Equatorial Guinea on Friday.

The AU summit, held Thursday and Friday in Malabo, indicates that Africa's rulers are more concerned with supporting themselves than in empowering their people to make freely democratic choices.

The question of how the AU should cope with the problem of the arrest warrant issued by the International Criminal Court for Libyan leader Muammar Gaddafi completely dominated the summit.

The African leaders decided that the 53 member nations should not carry out a warrant issued by the International Criminal Court for the arrest of Libyan leader Muammar Gaddafi.

They said the ICC warrant "seriously complicates the efforts aimed at finding a negotiated political settlement to the crisis in Libya" and would not appropriately deal with outstanding issues of "impunity and reconciliation."

But, as expected, they came out in favor of Gaddafi, one of their own. After all, Gaddafi was the driving force in founding the African Union in 2002, which was really re-branding the Organization of African Unity. Gaddafi donated millions of Libya's oil money to the African Union's operating budget year after year. So it is not surprising that the AU decided against enforcing the ICC arrest warrant.

The AU decision means that Gaddafi will be able to travel freely across the continent without fear of being arrested and sent to the Hague.

The African Union similarly refused to act on an arrest warrant issued by the ICC against Sudanese President Omar al-Bashir in 2009 on charges of genocide, war crimes and crimes against humanity in Darfur.

The AU went further Friday to defend Bashir. It urged the U.N. Security Council to intervene to stop the ICC's action against Bashir "in the interests of justice and peace" in Sudan.

And it absolved Chad, Kenya and Djibouti of any wrongdoing for having received Bashir since the warrant against him was issued, saying they were "acting in pursuit of peace and stability in their respective regions."

The African leaders complained that the ICC appeared to be targeting the continent, said African Union Commission chairman Jean Ping, after the summit.

"We support the fight against impunity, we do not support impunity, we are not even against the Criminal Court," he said. "We are against the way justice is being rendered because ... it looks as if this ICC is only interested in trying the Africans," he said, referring to decisions by ICC prosecutor Luis Moreno-Ocampo.

"Does this mean that in Pakistan, Afghanistan, Gaza, in Chechnya, there is nothing happening there?" asked Ping. "It is not only in Africa that there are problems. So why no one else except the Africans are being tried and judged by this court?"

Ping has a point. The only ICC arrest warrant out against a sitting head of state is for an African leader, Sudan's Bashir. And one of the most prominent trials is against former Liberian leader Charles Taylor. Sure the ICC has also taken action against former Serbian leaders, but it does appear that the ICC disproportionately concentrates its actions against African leaders. To boost its credibility, the ICC must be seen to be more even-handed in its prosecutions.

But the African Union could be a bit more discerning in its actions, too. Was Malabo the best choice for an AU summit? Not if the aim is to encourage decisions in favor of democracy and human rights. The regime of Equatorial Guinea President Teodoro Obiang Nguema has a record of being one of Africa's worst human rights abusers.

Obiang started the summit by warning the international community to mind its own business and stay out of Africa's affairs. With an opening like that from the host, there is little surprise that the African Union summit decided to protect Gaddafi.