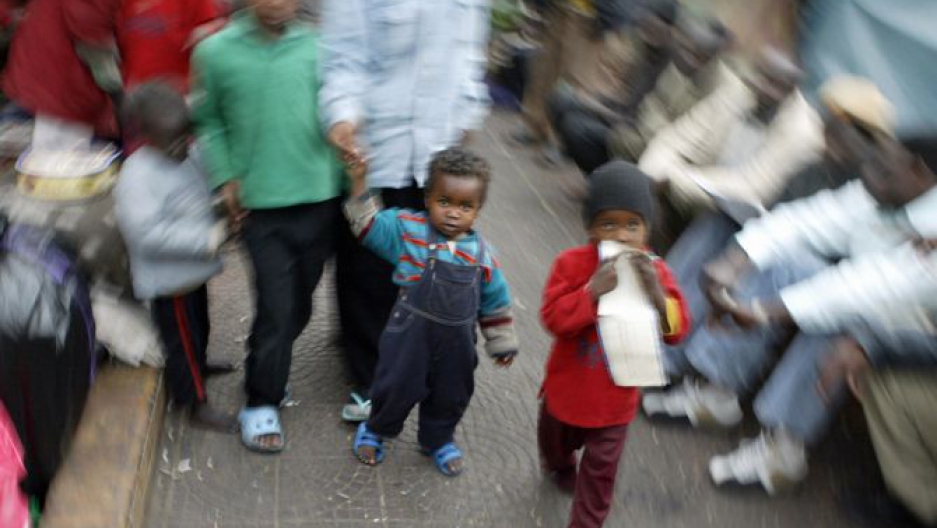 Sudanese refugees stage a sit-in in Cairo 20 December 2005. More than 2,500 Sudanese refugees are camping out in a cramped Cairo park, protesting the United Nations' apparent lack of efforts to resettle them in a third country.
Credit: Khaled Desouki
Share

6 OCTOBER CITY, Egypt — In the weeks after protesters swarmed Tahrir Square to demand the ouster of Hosni Mubarak, Egypt's ever-growing population of refugees and asylum seekers hoped to forge their own revolution in the streets of this desert city just west of Cairo.

The small-scale demonstrations that began after Mubarak's Feb. 11 departure, however, were not aimed at Egyptian officials, at least not directly.

The target of their anger was instead the very agency mandated to protect them, the United Nations High Commissioner for Refugees, or UNHCR, which is locally headquartered here.

Many refugees in Cairo, already socially marginalized and impoverished before the revolution, said they felt even more abandoned when the UNHCR evacuated its staff and suspended its services for nearly two weeks during the uprising.

Tension reached a boiling point last month in front of the UNHCR office, when a woman from Darfur committed an act of protest that has come to symbolize the extreme desperation fueling the Arab Spring — she lit herself on fire.

The woman, 38-year-old Nema Mohamed, was pregnant at the time.

But after six years of languishing in a Cairo slum with little income while waiting to be resettled out of Egypt, Mohamed said she could no longer afford to feed and clothe the four children she already has.

"I wanted to kill myself. I am suffering and felt there was no reason to continue living," said Mohamed, who survived the incident with second-degree burns on her face and chest only because bystanders were able to douse her flame-engulfed blouse.

"But I also wanted the UNHCR to realize how hopeless I feel. So if the solution was for me to die to teach them that lesson, then so be it," Mohamed said.

For the roughly 40,000 refugees living in Egypt, the Arab world's most populous country has never been an ideal temporary home. Refugees have no official permission to work and have only limited access to education and health care.

But during the upheaval that followed Egypt's revolution, things got even worse.

Police largely disappeared from the streets and chaos descended upon neighborhoods where refugees already faced discrimination and violence.

Even in Cairo's most secure neighborhoods, occasional outbursts of violence have halted life in Egypt's capital with little to no warning. Just this week, riot troops fired tear gas and rubber bullets to disperse crowds in a day-long battle with pro-reform activists in the streets near Tahrir.

The relative safety of Egypt began to feel more like the danger and uncertainty of the war-torn countries they had originally fled.

"When I heard gunfire on the streets, it reminded me of Mogadishu," said Abdi Kadir, 35, a Somali refugee living in Giza. "I was way too scared to leave my neighborhood."

For some refugees in Egypt, the only viable solution was to appeal to be resettled in a third country.

A few dozen refugees began protesting outside the refugee agency in February. Some camped out overnight with their children. Others waved cardboard placards scribbled in English, "UNHCR staffs are depriving refugee's [sic] rights in Cairo."

Demonstrations, however, eventually became violent, according to the U.N. agency.

On Feb. 16, several demonstrators "became agitated and stones were thrown at the office," according to a letter written to the refugee community from the UNHCR's Geneva headquarters.

During a protest in March, refugees reportedly attempted to climb the building’s walls. Some were even intimidating the organization's staff to the point where they felt it was unsafe to go to work.

Unable to persuade those encamped at their office to disperse, the agency closed its doors again for more than a week in late March, only further angering the refugee community.

"[The protesters were] a small number of people compared to the large number of refugees and asylum seekers in Cairo. But unfortunately they were blocking access for everyone," said Elizabeth Tan, the deputy UNHCR representative to Egypt, in a telephone interview.

Tan said that for each day of closure, up to 50 interviews with refugees were prevented because of the small minority of violent protesters.

Tan believes that the situation has improved since the self-immolation attempt in May, despite the fact that one of her staff members was "punched in the face" just last week.

One of the biggest hurdles facing the UNHCR is that many refugees incorrectly believe that resettlement is a right. In fact, only a small minority of refugees are screened for resettlement, and an even smaller percentage are  relocated to countries like the United States and Canada each year.

"The problem is that some refugees have heightened expectations, but it's just not possible for everyone," Tan said.

The UNHCR has made several attempts to alleviate the short-term problems facing refugees in the wake of Egypt's revolution.

Several staff members were added to the agency's resettlement unit. And the number of refugees referred for resettlement each year was recently increased.

Other efforts, however, have been less successful.

UNHCR planned to distribute roughly $1 million in emergency economic relief to refugees following Egypt's revolution, but only half of this money was ever collected. Some asylum seekers said they never heard of the program.

"The UNHCR is like our government. But they never give us any of the right information," said Nemo Daoud, a refugee who protested outside the headquarters earlier this year.

Protests may have largely subsided in recent weeks, but the frustration felt among refugees remains as it has for years. In 2005, for instance, a similar standoff between refugees and the United Nations ended violently.

Back then, hundreds of mostly Sudanese refugees, angered by a suspension of some UNHCR services, protested near the agency's former Cairo headquarters. The months-long demonstration ended with a violent police raid in the middle of the night that left 27 refugees dead.

The UNHCR later moved to this satellite city far from Cairo.

Hammed Youssef, who is from Nigeria, sees no other option other than to protest — if he could only afford to pay for the long bus ride out to 6 October City.

The 19-year-old refugee said resettlement is not his main goal. After getting beaten on Cairo's streets following the January uprising, Youssef is only hoping that someone will provide him with better protection.

"Why shouldn't we keep fighting for our rights?" asked Youssef. "I don't want to go to America. I'd be happy living in Egypt — if only things were safe for me."