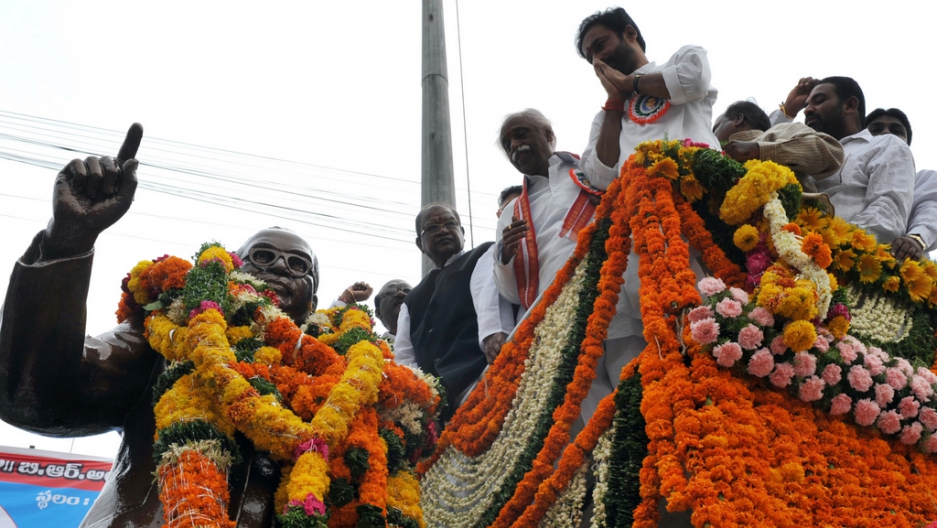 Indian political leaders of Bharatiya Janatha Party garland a statue of Bhimrao Ramji Ambedkar in Hyderabad on April 14, 2011 on the occasion of Ambedkar Jayanti (birth anniversary) of B.R.Ambedkar who was born on April 14, 1891 at MHOW (Military Headquarter of War) in Madhya Pradesh. Also known as the 'Father of the Indian Constitution', Ambedkar spent his whole life fighting against social discrimination and the Hindu caste system.
Credit: NOAH SEELAM
Share

India launched the first census of its myriad castes since it gained independence from Britain in 1947, reports the Economic Times.

The census started in a remote village, 45 km north of the capital of the state of Tripura, the paper said. It is slated to be finished by December.

The caste data is being gathered alongside economic data designed to count the number of Indians living in poverty, and, as such, will likely impact the design of India's controversial system of quotas in jobs and higher education for the so-called "Scheduled Castes and Scheduled Tribes" and "Other Backward Classes." Currently, there are quotas for these castes and tribes in government jobs and higher education, but the percentage of placements reserved under the quota system has been called into question from both sides.  The percentages -- 22.5% for SC/STs and 27% for OBCs -- are theoretically meant to match the groups' presence in the general population, but no effort has been made to ascertain their numbers since the British left India.

However, as ET reports, the caste census itself will be limited in scope, as it will only allow respondents to be classed as Scheduled Tribes, Scheduled Castes, others and no caste -- which means it would not examine the status of individual castes within the quota categories, and not look closely at the OBC group at all.

This may be a calculated move, as there are frequent claims against or in favor of the inclusion of various castes -- especially among the OBC group -- in the quota system. Matching caste to socio-economic status, with numbers to back up the conclusions, would be a political hot potato, because "Reservations" (i.e. quotas) have become a popular vote-getting strategy.