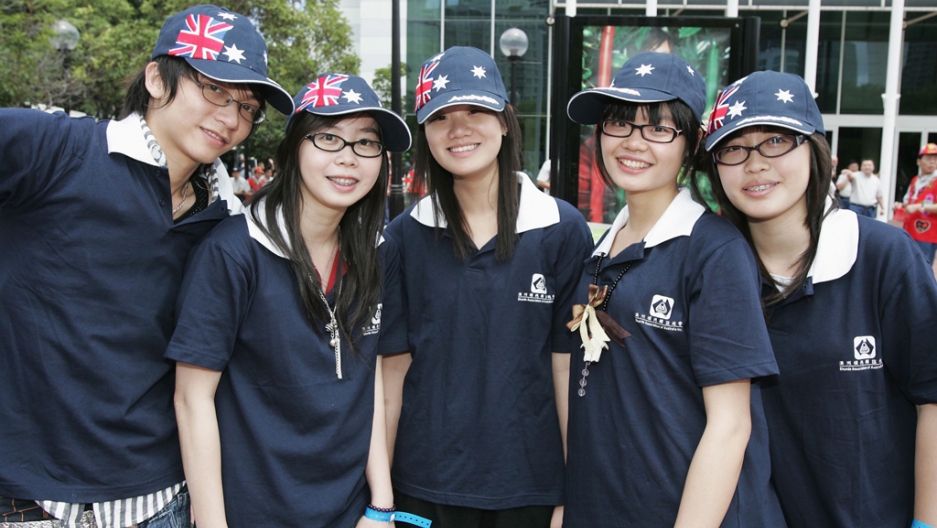 A group of performers participate in the 2008 Chinese New Parade on February 10, 2008 in Sydney, Australia. The parade involved 2,500 performers in what is the largest celebration of Chinese New Year outside of Asia.
Credit: Gaye Gerard
Share

Australia's Chinese community wants an end to "white superiority" and an apology from the government for what they call racist laws imposed against them since the gold rush days.

If reports are to be read literally, they may also be asking for the mother of all tax refunds — to redress "the expensive head tax and unscrupulous dictation tests forced on prospective Chinese immigrants to stem their flow," the Sydney Morning Herald reports.

Australians of Chinese ancestry (3 percent of the population, according to the Australian Bureau of Statistics) have a relatively long, proud and prosperous history in Australia. Well, prosperous at least.

Despite textbook history accounts of Australia being "discovered" by Europeans — first the Dutch, who by all accounts took one look at "Van Diemen's Land" (the heart-shaped southern island state of Tasmania, discovered by explorer Abel Tasman in the 1600s) and turned tail back to Europe, and then the British — many scholarly accounts exist of Chinese trading with Aborigines as early as the 1400s.

For the purposes of this story, however, fast forward the the arrival of Chinese during Australia's Gold Rush era of the 1850s — that's the main source of the lament of Chinese Australian groups that the country has never made amends for anti-Chinese policies that began in the 19th century and lasted until 1973, with the abolition of the ''White Australia'' policy.

As the Australian Broadcasting Corporation puts it:

Ongoing distrust of Chinese and other migrants was behind the thinking of the Immigration Restriction Act of 1901 — the central plank of what is known as the White Australia Policy.

Under it, some Chinese workers were welcomed as they provided cheap labor. Those who did make it were not allowed to bring their families over.

Dictation tests, which were used until the middle of last century, were one mechanism to exclude people.

On arrival, would-be immigrants could be asked to translate into English some text from any foreign language.

The last vestiges of the White Australia Policy were only removed in the 1970s.

So, Australian prospectors got rich off the back of Chinese gold miners, then made them feel very unwelcome by demanding, among other things, that they learn the local lingo.

Of course there's more to it, there always is. The so-called White Australia Policy — which encouraged racially-based selection criteria for new migrants as a way of restrict "non-white" immigration to Australia from 1901 to 1973, when the Racial Discrimination Act was passed — remains an embarrassment to many Australians.

And Australian Chinese themselves concede that they were not the only group discriminated against under the policy. As Chinese Heritage Association president Daphne Lowe Kelley told the ABC:

"Every group that perhaps isn't marked as British in some ways would have been on the receiving end of some level of discrimination.

"But I guess what's particular about the Chinese is the history of this discrimination in that is goes right back to the gold rush in the 1850s when they were singled out as a group to be targeted for exclusion.

"So they're not by themselves but the longevity of the discrimination does make them distinctive."

But Chinese Community Council of Australia president Anthony Pun reportedly says that "it is now time for Australia to say sorry for the injustices of the past."

"Apology simply means Australia is magnanimous, it's compassionate,"he said. "Australia is understanding and Australia is a multicultural society and therefore it is big enough, strong enough to say 'yes we did something wrong and for us, that this country of ours is really good and we are proud and we can stand tall in the international community and say look Australia can do this'.

Kelley thinks things could be taken a little further.

According to the Sydney Morning Herald, she suggested that the Australian history curriculum taught in schools be overhauled.

"Students need to know about the role Chinese people played and have a deeper understanding of the Lambing Flat riots of 1861 [when European gold diggers drove Chinese from the goldfield]," she said

Apparently warming to the topic, she says: "The time has come for a number of Chinese-Australians to get rid of the last vestiges of white superiority. We want to be recognized for all our contributions."

Meanwhile, Kelley says, other countries, including New Zealand and Canada, have already issued apologies — and made financial amends.

"Even recently in 2009 the Californian legislature has also apologized to the Chinese and they've also recognized the contribution that Chinese have made to those countries.

"This is something similar that we would like to see here in Australia."

Chinese community groups say they are not looking for compensation, but if it were offered (...) would like to see a fund set up to educate Chinese and non-Chinese Australians on the history of discrimination.