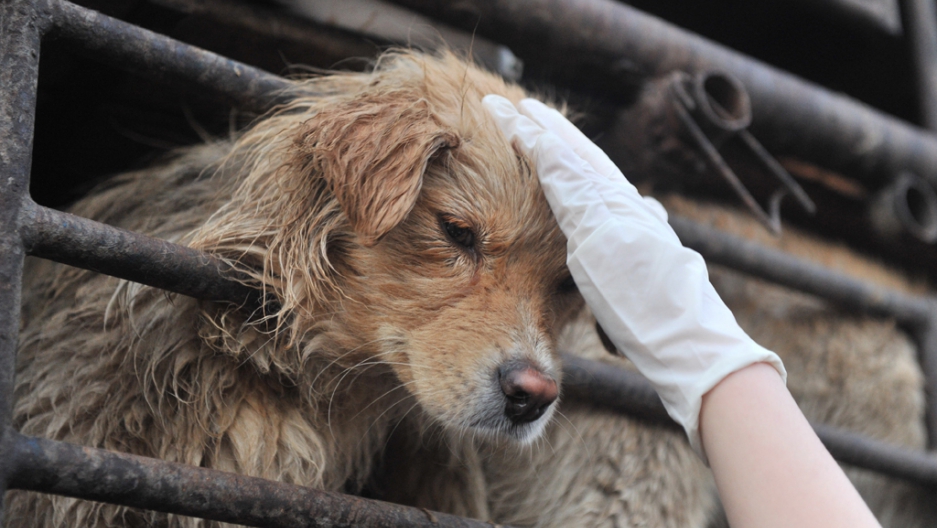 An animal lover consoles a dog after a convoy of trucks carrying some 500 dogs to be sold as meat was stopped on a highway in Beijing on April 17, 2011.
Credit: Stringer
Share

These and so much more were to be had at this weekend's dog meat festival near Seoul.

Animal rights activists put up such a stink that the organizers, from the Korea Dog Farmers' Association, said there was no way they could go through with the event.

"We couldn't possibly go on with the plan due to endless phone calls of complaint ... now there are few willing to rent us a place for the event," Ann Yong-Geun, a professor of nutrition at Chung Cheong University and an advisor to the association, told AFP.

Organizers of the festival had wanted to showcase the positive side of the dog meat industry in South Korea, where there are about 600 farms that raise dogs for meat, according to Ann.

Dog soup, or Boshintang, is a summer delicacy in South Korea, though the Wall Street Journal reports that it isn't as popular as the media would make it seem.

A minority of people eat it regularly. It’s consumed most frequently in summer but is available year-round. And it’s more popular with men than women and is said to possess qualities that "help stamina."

They were, for example, going to show videos of farms raising dogs under sanitary conditions — something, they will tell you, that would become a more ubiquitous practice were the industry legalized and regulated.

But for many activists, the humane treatment of the dogs is beside the point. To them, dogs are companions not a main course, end of story.

The irony is that in South Korea, that wasn't really true until more recently. And even now, it's really only true in the city, where they raise "pet dogs," as opposed to "meat dogs."

As William Saletan wrote in Slate a few years back:

In the country, they raise "meat dogs," also known as "junk dogs" and "lower-grade" dogs. But you don't become a "lower-grade" dog by flunking an IQ test. You're just born in the wrong place. Then you're slaughtered and fed to a man who thinks he's humane because he pampers a Golden Retriever that has half your brains.

So, what's really wrong with eating dog? Just because we don't do it in the U.S. doesn't seem to make for a very good argument.