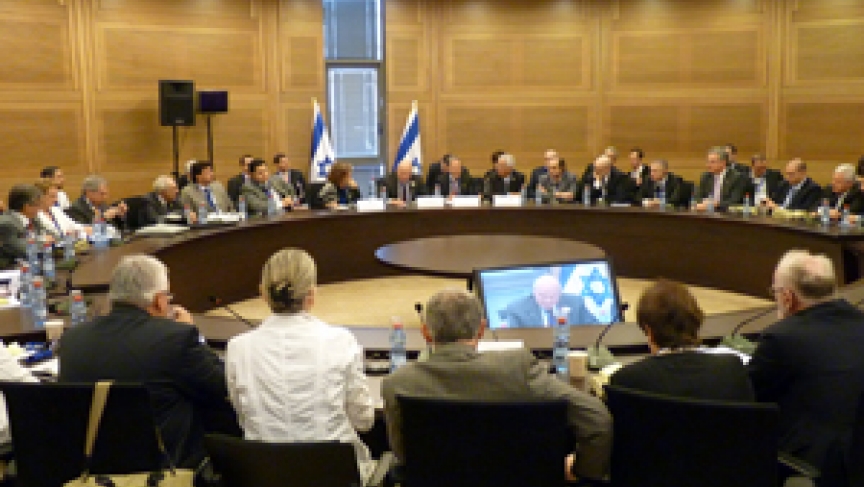 Jewish lawmakers from around the world visited Israel this week. Their conference got under way in the Knesset this morning. (photo: matthew bell

Share
Palestinian leaders say they're going through with it. In September, they will ask the United Nations to recognize an independent state of Palestine along the borders that existed with Israel before 1967. The Obama administration opposes the move. But Israel isn't taking any chances. The Israeli government is rallying supporters around the globe to oppose Palestinian efforts at the UN. Jewish legislators from around the world are part of the effort. They are visiting Israel this week for a conference on how they can support the Jewish State back home. Tuesday morning, about two dozen international lawmakers went to the Knesset building to hear from Israeli officials, including Moshe Ya'alon. Ya'alon is vice prime minister and a former chief of staff of the Israel Defense Forces. He blasted Palestinian maneuvering for a unilateral declaration at the UN. "By bringing the Palestinian issue to the United Nations," Ya'alon said. "Actually, it's not going to bring about any incentive to the Palestinian leadership to come to the table." "We will witness for sure in the West Bank a failed and hostile entity. It might be in the end, a second 'Hamastan.'" Ya'alon was making a reference to the Gaza Strip, which has been controlled by the Islamist militant group Hamas since 2007. After the Knesset, the next stop for visiting lawmakers was the protest tent for Gilad Shalit outside Israeli prime minister's residence in Jerusalem. Shalit is the Israeli soldier who was taken captive by Palestinian militants from the Gaza Strip just over five years ago. The soldier's father, Noam Shalit wonders how people who would hold son incommunicado for so long could be recognized as leaders of a legitimate state. "We ask all the international community to demand from the Palestinian Authority to stop this war crime immediately because they are willing to be recognized as a state in September," Shalit said. One of the American congress members on hand Tuesday was Henry Waxman — Democrat from California. Waxman says he fully supports the creation of an independent state but he sees the UN drive for Palestinian statehood as an about-face. "It's turning its back on a peace process that we would hope would be continued and that could result in a two-state solution," Waxman said. "It's a serious mistake and I hope the UN would reject it," he added. "More important than that, I would hope that the Palestinian Authority would not go forward." Washington is also skeptical about recent attempts at reconciliation between Hamas and Fatah. Fatah is the secular-leaning rival of Hamas. The faction dominates the US-supported Palestinian Authority in the West Bank. Democrat Nita Lowey of New York says Congress will cut off funding to any Palestinian unity government of Hamas and Fatah, that is, unless Hamas makes some fundamental changes. Lowey said the Islamist group must renounce violence and recognize the legitimacy of the state of Israel. "The two-state solution, one for the Jews, one for the Palestinians, is accepted by most legitimate governments around the world," Lowey said. "And as soon as Hamas accepts that reality, they can be part of the future. Until then, they cannot." Lowey's Congressional colleague Gary Ackerman, who's also from New York, is skeptical about the willingness of Hamas to change its ways. Ackerman says that also makes him skeptical about the Palestinian drive for UN recognition as a state. "If you get into a cage with a lion, you're not a partner," Ackerman said. "You're a lunch." "I think that any government that has a terrorist organization within it, is not a government that we're going to recognize or do business with or support in any way, shape or form." Ackerman says unilateral recognition at the UN would only hurt the Palestinian people in the end. But a recent poll suggests that Palestinians do not agree. The joint Israeli-Palestinian survey was published by the Hebrew University of Jerusalem and the Palestinian Center for Policy and Survey Research in Ramallah. It found that 65 percent of Palestinian respondents said they should seek recognition as a state from the United Nations. At the same time, a majority of 61 percent of Palestinians who took part in the survey said they do not support renewed negotiations with Israel.