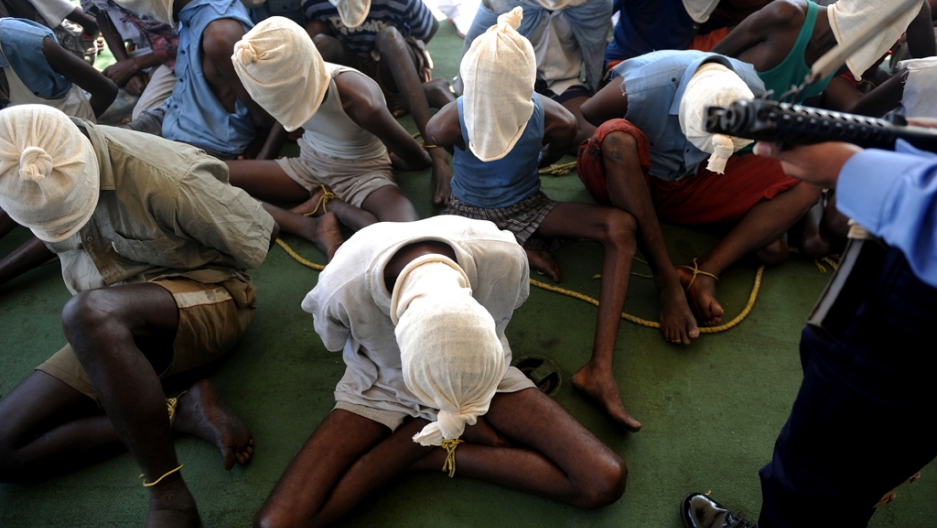 Suspected Somali pirates sit with their faces covered during a media interaction on board an Indian Coast guard ship off the coast of Mumbai.
Credit: Punit Paranjpe
Share

WASHINGTON — It has been a record year for pirate hijackings off the coast of Somalia, with nearly 100 recorded in the first quarter of 2011 and average ransom payments of more than $5 million.

Despite pouring an estimated $1.3 to $2 billion annually into an enormously complex naval counter-piracy operation, pirate attacks are at an all-time high. The Indian Ocean is plagued with piracy as far as the Seychelles Islands. That's because we apply superficial fixes without ever addressing the root causes: Somalia's chronic insecurity and state collapse.

The real solution to the piracy lies not in the waters of the Indian Ocean, but onshore in Somalia.

The answer is in re-imposing state authority in the now lawless parts of Somalia, which have become a fertile breeding ground for piracy and terrorism and a persistent threat to regional and international stability. This will require the political will of local authorities to clamp down on pirate gangs. They can be persuaded to do so with the right incentives and pressure from the international community.

It is important to remember that pirates operate from only some parts of the Somali coast, and they need the cooperation of local leaders and communities. Without their support, pirate gangs would not be able to re-equip and re-supply for their raids or take the captured ships and hostages back to Somalia for the months-long ransom negotiations.

In other areas, local authorities and communities refuse to countenance this activity. For example, the Somaliland territory suppresses pirate gangs because they want to be recognized as an independent country. In 2006, the then dominant Islamic Courts Union banned — and largely ended — piracy because it is illegal under Islamic law. Somaliland has been rewarded with a large share of Somalia’s international development assistance.

Other local leaders could also suppress piracy if it was in their interest, but they either benefit directly from ransom payments or are unwilling to pay the political price for confronting the clans who do. Normally, the international community could work with the national government to provide the right carrots and sticks to those leaders. But in Somalia, the inept Transitional Federal Government (TFG), is struggling to control the capital, Mogadishu, let alone impose its authority on the rest of the country.

Nearly two years since it was sworn in, the transitional government has become increasingly corrupt and hobbled by President Sheikh Sharif’s weak leadership. So far, every effort to make the administration modestly functional has failed. Yet, it would be unfair to lay all the blame for the continued catastrophe of the transitional government and Sharif. At the core of Somalia’s governance crisis is a deeply-flawed central state model that simply doesn’t work for the country at this time.

Many recognize this problem. But efforts to devolve power or share power with the self-governing enclaves are stymied by the transitional government's elites, who stand to lose.

Rather than wait and pray that the transitional government will reform, the international community needs to look to regional and local governmental initiatives, such as Somaliland and Puntland, and to a lesser extent Galmudug or Ximan and Xeeb, that have made considerable strides in bringing peace, stability and development to their respective regions and citizens, without the support of the international community. As Somaliland has shown, even those areas that suffer from extreme poverty, poor development and weak security services can succeed in suppressing piracy.

Instead of squandering billions of dollars on band-aids, the international community should create the right incentives for local and regional authorities to stop piracy in their territories. This could include some support for training and expanding a coast guard, but should also focus on building the capacity of these administrations to govern effectively and provide desperately needed basic services, such as rule of law, health care and education. These should be modest programs that reward local communities for establishing peace and stability and provide the right incentives to continue to do so. This would not only be much cheaper than a hugely expensive naval operation — and the added cost that shippers and insurance agents pass on — it would actually help stabilize the situation on the ground.

Once Somalis recognize that it is in their interest to stop supporting piracy, it will quickly end.

Chronic conflict is exacting an enormous toll beyond the seas. Many Somalis live in constant insecurity and grinding poverty, with little hope of escape. Seventy-one percent of the population is under-nourished, nearly half live on less than $1 a day and more than 20 percent are displaced. Last year, the United Nations requested more than $596 million just to address the most urgent humanitarian needs.

As long as the international community applies superficial fixes, without addressing the root causes of chronic insecurity and state collapse, Somalia will remain a shattered country, a haven for hijackers and terrorists, and a constant drain on humanitarian assistance.

We can stop all this, but only by building up from the broken pieces.

EJ Hogendoorn is the Horn of Africa Project Director for the International Crisis Group.