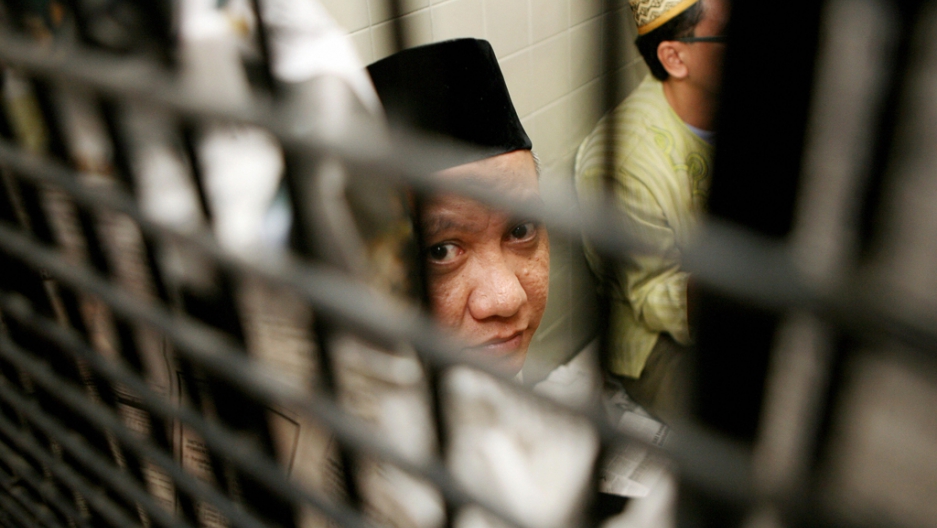 The leader of Islamic militant network Jemaah Islamiyah (JI) Zarkasi peers out of a cell at a court, before his first trial in Jakarta, Dec. 17, 2007.
Credit: Ahmad Zamroni
Share

SEMARANG, Indonesia — Machmudi Hariono never dreamed of becoming a terrorist. But watching the brutal footage of Muslim Serbs being massacred in Srebrenica in 1995 changed his mind.

Not 10 years later, in 2004, Hariono went to jail for his involvement with Jemaah Islamiyah (JI), the Southeast Asian terror group affiliated with Al Qaeda and behind the deadly 2002 Bali bombings. But today, the convicted terrorist swears he has swapped his AK-47 for fried duck.

The quaint restaurant he manages on the backstreets of Semarang, in Central Java, is part of a social initiative designed to help former terrorists reintegrate into society once they get out of prison.

“It has not been easy abandoning jihad,” Hariono said in a recent interview at his restraurant, preparing for the morning rush. “But that is a consequence of choosing this path. I want to have a clean life now.”

Hariono joined the Moro Islamic Liberation Front in the jungles of the Philippines at age 23, and when he returned to Indonesia he took up with JI.

“I joined the terrorists in the Philippines for the community of Muslims in Mindanao. When I fought there I was a hero for all the people, but I am positive that I don’t want to be involved in that terrorist world ever again. I want to be a hero for my daughter, my wife and my community,” he said.

The de-radicalization initiative is the brainchild of Noor Huda Ismail, a former Washington Post journalist who became fascinated with the terrorist psyche after covering the Bali bombings.

Educated in an Islamic boarding school, Ismail says his background allows him to develop close relationships with convicted terrorists like Hariono.

“I used to be like them before. I used to be in their world, so I know how to talk to them in their language. So Machmudi felt comfortable with my approach and I maintained contact with him by often visiting the jail,” said Ismail, who today heads a local non-governmental organization called the Institute of International Peace Building.

The institute has developed three programs for convicted terrorists, but Ismail says the restaurant is the most effective because it encourages participants to engage with a broad cross-section of society.

“Here, in the restaurant business, you cannot choose your customer. The restaurant allows recruits to have an intense interaction with a number of different types of people, from Christians who come here for breakfast to girls without veils,” he said.

His organization's first program helped self-proclaimed former terrorists set up their own fish farms. But the lack of social interaction caused several to return to their old ways.

One of the biggest challenges for convicted terrorists is the social limbo they face upon their release. Ostracized on both sides, they are seen as tainted members by their former networks and social outcasts in their new communities.

For many, regaining acceptance in their radical networks is easier than starting a clean slate.

“All of these radical groups, especially JI, are first and foremost social networks,” said Sidney Jones, a Jakarta-based terrorism expert from the International Crisis Group.

“People are intermarried, they live together, they send their kids to the same schools, they train together and it’s all very close-knit. Once you are suspected or if you actively break with that, then you are upsetting not just a daily routine but disrupting your whole network of friends and family,” she said.

While Hariono is adamant he is no longer involved in radical activities, he admits that he is closer to some jihadists than he is to his own family.

“My inmates in jail have similar pasts to me. We lived together for more than five years. There are strong family and emotional ties between us. I visit them in jail often. I want to know their struggles because I want to help,” he said.

Ismail says the program is a fragile and tenuous negotiation, and he prefers to call it a process of “disengagement” rather than “de-radicalization.”

“They are dragons by nature,” he said. “They are dangerous no matter what. They have lethal skins ... and they know how to use [them], but Machmudi is one of the vivid examples. I have molded him. I have changed his passion for using AK-47s to fried duck.”

It may be a small victory in light of recent book bombs and a suicide bombing in Central Java, all of which point to lingering extremism in the world’s largest Muslim-majority nation. But for now, counterterrorism efforts in Indonesia revolve around the arrests and killings of terrorists, not on their social and economic rehabilitation.

It’s an approach that won’t work in the longterm, argues Ismail. “We can’t beat terrorists with bullets. It’s a story that Westerners want to destroy and crush Islam by all means. How can you fight that narrative with a bullet?” he asked.

“I know one guy whose brother was released and he was a fairly dangerous individual. The parole body didn’t have enough resources, so the brother gave them gasoline so they could follow him around on a motorcycle. I mean at that stage it just becomes ludicrous,” she said.

While Ismail admitted there are loopholes in his program — at least one participant in his program was later involved in the 2009 bombing of the JW Marriot in Jakarta — he said he had to start somewhere.

“There is very limited interest in the silent and lonely world of helping convicted terrorists return to normal life. Building trust is a gradual and painful process,” he said.

Slowly, however, says the charismatic Hariono, the stigma around him is decreasing.

“I think the best thing is making friends that don’t know about my past, but gradually I tell them and I feel OK.”