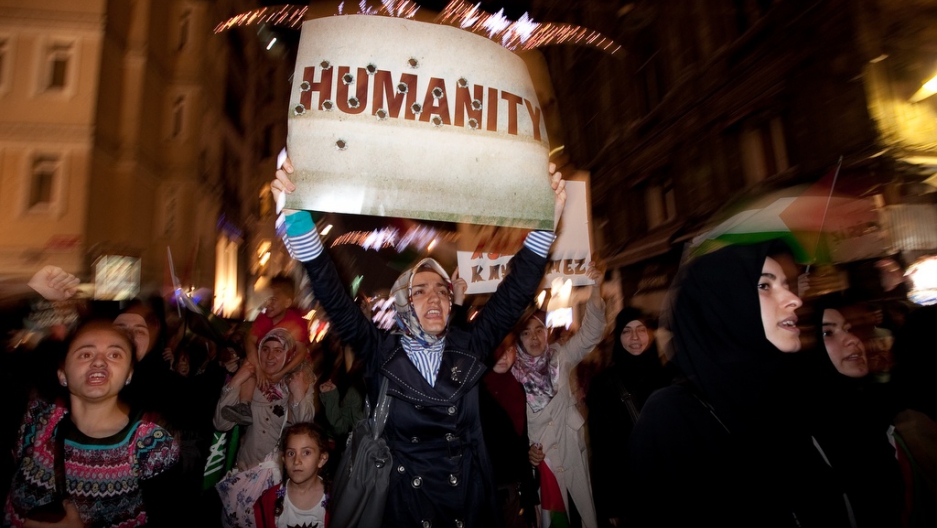 IHH and supporters march in support of Palestinians and the Gaza Flotilla on May 30, 2011 in Istanbul, Turkey.
Credit: Jodi Hilton
Share

ISTANBUL, Turkey — As a flotilla of aid makes its way from Turkey to the Gaza Strip, which has long been isolated by a naval blockade imposed by Israel, the charity that started it all will be staying home.

Volunteers from the Foundation for Human Rights and Freedoms and Humanitarian Relief, known by its Turkish acronym, IHH, famously sailed its boat, the Mavi Marmara, toward Gaza last year, only to be intercepted by the Israeli navy.

During an ensuing clash between activists and Israeli security forces, nine Turkish civilians were killed, sparking a diplomatic fallout between Turkey and Israel that has only just begun to repair itself.

Despite the deaths and the subsequent controversy, representatives from IHH said they would do it again — and they had planned to until, earlier this month, when they abruptly grounded their now world famous boat.

Ten other boats belonging to charities from several other European countries and the United States have decided to go ahead with the trip.

IHH officials said the organization chose not to participate because of mechanical problems and to focus its efforts on humanitarian problems closer to home, such as the Syrian refugees piling up on the Turkish border.

But some say the charity was under pressure form both its own government, which seeks to avoid another clash with Israel, and outside groups that have accused IHH of having connections to terrorist organizations.

Like Turkey itself, IHH has sometimes struggled to appear impartial in the face of its Muslim affiliations, which some think have now contributed to its decision to stay home during the so-called Freedom Flotilla II.

Chuck Schumer, a U.S. Senator from New York, has led a chorus of critics calling for an investigation into IHH and its relationships with Islamist organizations. In a letter to Secretary of State Hillary Clinton, Schumer asked her to “immediately conduct an investigation to determine if IHH has ties to terror groups.”

Among the others calling for an investigation are The Zionist Organization of America and former deputy U.S. national security advisor, Elliot Abrams.

Citing a 2006 report, the Zionist Organization of America said that IHH served as a front for funding terrorist organizations and supported Islamic militants. The group believes that IHH was connected to a failed plan to bomb the Los Angeles Airport in 1999. On their website, the group cites news articles that suggest “Islamic charities like IHH” provide support to Al Qaeda.

The calls for an investigation came shortly after demands from several Italian lawmakers that IHH be added to the European Union’s list of terrorist organizations, citing ties to Hamas and the Union of Good, an umbrella organization of Islamic charities that is based in Saudi Arabia.

Few inside Turkey, however, believe the accusations are true.

They might be openly supporting Hamas in Gaza, she said, but Hamas is a democratically elected political party and there are many other charities and countries, including from Europe and the United States, that are participating in the Gaza-bound flotilla.

IHH, for its part, says that it is a humanitarian group and nothing more.

“We are not just concerned about Palestinians,” says Ouassima Ibn Salah, a spokesperson for IHH, who cited numerous other programs, including responding to the Japanese earthquake, as examples.

“The earthquake happened in the morning, and by that afternoon, we were already on a plane to Japan.” Within days, IHH said it was bringing emergency aid to affected areas in Japan, as it had after the Haiti earthquake and the flooding in Pakistan in 2010.

Founded in 1995 in Istanbul, IHH said it now provides humanitarian assistance to the needy in 120 countries worldwide.

The foundation has focused much of its public work on bringing assistance and freedom to Palestinians and cooperates with Hamas. On the wall of its office hangs a framed picture of an activist holding a Palestinian flag.

But IHH is also building an orphanage in Thailand and is planning another in the Philippines, according to volunteers. In nine African countries IHH doctors have performed 45,000 cataract operations, according to the charity’s website.

In emergencies, IHH volunteers are quick responders, ready to deliver emergency food aid and other supplies to disaster zones. In April, IHH sent a cargo ship filled with 682 tons of food, medicine and a portable hospital to Misrata, Libya to help civilians caught in the conflict between Libyan rebels and forces loyal to Libyan leader Muammar Gaddafi.

“Our teams are easily mobilized,” said IHH Relief Coordinator Murat Bayraktar, who is now working to bring aid to the Syrian refugees that have flooded the Turkish border. “We do this job for humanity.”

IHH is open about its Muslim roots and governing philosophy, which it takes from Islam. But, analysts say, that doesn’t mean it supports terrorism.

The growing negative international attention IHH has received since last year’s Freedom Flotilla, however, has concerned the Turkish government, which is desperate to avoid any more run-ins with Israel, analysts said.

Semi Semih İdiz, a Turkish journalist writing in an editorial in the Hurriyet Daily News, said that IHH officials had gone “out of their way” to dispel rumors that they were under pressure from the government, and others, to abandon the trip.

But, he wrote, there is “every reason to believe the opposite,” citing reports that Turkish Foreign Minister Ahmet Davutoglu had “advised” organizers of the flotilla to “wait” and reconsider their plan.

Despite not participating in the flotilla, IHH organizers said they had plenty of other things to do and would find other ways to support the Palestinians. IHH has regularly organized rallies in Istanbul in support of the Palestinian cause and against Israel.

Several thousand IHH supporters marked the anniversary of the deaths of the nine Turks aboard the Mavi Marmara during the first Freedom Flotilla to Gaza late last month.

During the rally, a dozen international speakers who all planned to participate in the upcoming Freedom Flotilla joined the organization’s leader, Bulent Yildirim. In the packed square, people waved Palestinian flags and held signs with the IHH slogan, “Stay Human,” written in Arabic, Turkish, Hebrew and English.