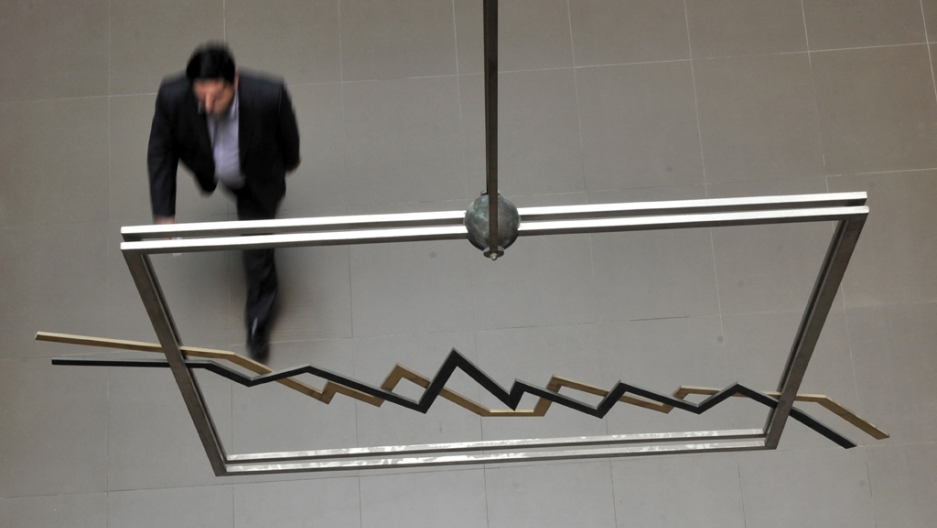 An employee walks by an index sculpture in the Hellenic Exchanges on June 2, 2011.
Credit: Louisa Gouliamaki
Share

BRUSSELS, Belgium ― What happens if the Greek parliament rejects new budget cuts, deep-sixing its financial aid from the European Union?

“You can't let anyone believe there is a Plan B,” said Euro Group chief Jean-Claude Juncker, the prime minister of Luxembourg who heads up meetings of the 17 countries using the common currency. “And there isn’t a Plan B,” he insisted after EU heads of state gathered in Brussels last week, for a summit focused on the Greek crisis.

The EU stands ready with the next tranche of Greece’s current rescue package and a possible second bailout, pending Greek approval of about $40 billion of budget cuts and tax hikes this week. So far, the EU insists it doesn’t have contingency plans if the Greek parliament rejects the austerity measures. Meanwhile, talk about a Plan B is taboo in Brussels.

But with so much at stake ― by the most dire assessments, the existence of the common currency or even the bloc itself ― it’s inconceivable that policymakers aren’t looking ahead.

So is Brussels bluffing?

Janis Emmanouilidis, a senior analyst at the European Policy Center, says some of this is semantic. Though EU officials and European leaders have stuck admirably to the script of “no Plan B,” some going so far as to add “nor C or D,” Emmanouilidis says “in any case, you have to prepare yourself for what will happen in the markets.”

He believes the EU needs a Plan B for itself, regardless of what happens in Greece this week.

“In an ideal world,” he recommends, the EU should make a wish list of reforms that would include the “introduction of euro bonds, the creation of a European finance ministry, the harmonization of policies in areas such as taxation or social policy [and] a substantial increase in the EU budget.” This would lead to the “creation of an economic and political union with a state-like quality able not only to solve the euro crisis but also to achieve the strategic objective of a global Europe capable of playing a key role in determining international political and economic developments in a highly dynamic global environment.”

Economic analyst and critic of the common currency Daniel Gueguen says it’s time for Brussels to entertain the notion of states leaving the euro zone, which he believes it’s high time for Greece to do. “Go back to the drachma,” Gueguen recommends to Athens, and restructure the debt.

What Gueguen calls his “big fear” is that the debt crisis will continue to spread. “We see already the problem in Portugal, we have a problem in Ireland, we have now tensions in the Spanish market,” he said. “It’s a very, very dangerous situation.”

The problem with Gueguen’s plan is that, as much continues to be written about Greece leaving the euro zone, at present there is no mechanism for it to leave ― or be kicked out for that matter. The question is so sensitive that European Central Bank spokesman William Lelieveldt refused to discuss the issue. “No comment,” he said repeatedly, when asked about the technicalities of breaking up the euro zone.

Emmanouilidis said the only mechanism that exists, as yet untested, would be for Greece to leave the entire EU, a scenario provided for in the bloc’s governing treaty. But he doesn’t think that’s realistic.

“There would be thousands of questions that would need to be answered of what needed to be done in order to get out” of the euro zone, Emmanouilidis said. “So beyond the legal, there are the practical questions which will be difficult to solve … you would need both sides to be very eager to accept thousands of compromises.”

Gueguen, whose 2004 book “The Euro: Europe’s Construction or Destruction?” argues that the euro zone’s model of sharing a currency between states with different fiscal policies is unsustainable and believes that the EU should accept its share of the burden for Greece’s financial demise. Since the EU allowed the country to join the common currency without proving it could meet minimum standards, “we have to take our responsibility and pay a big part of the bill,” he said ― but not in the form of repeated bailouts, which he likens to tossing cash into a bottomless pit.

Greece should leave the euro zone, he said, and out of solidarity the EU should “cut down three-quarters of the debt by loss and profit and Greece can restart with a small debt and live its life."

And that, Gueguen says, should be Plan A.

Editor's note: This story was updated to correct the spelling of a name.