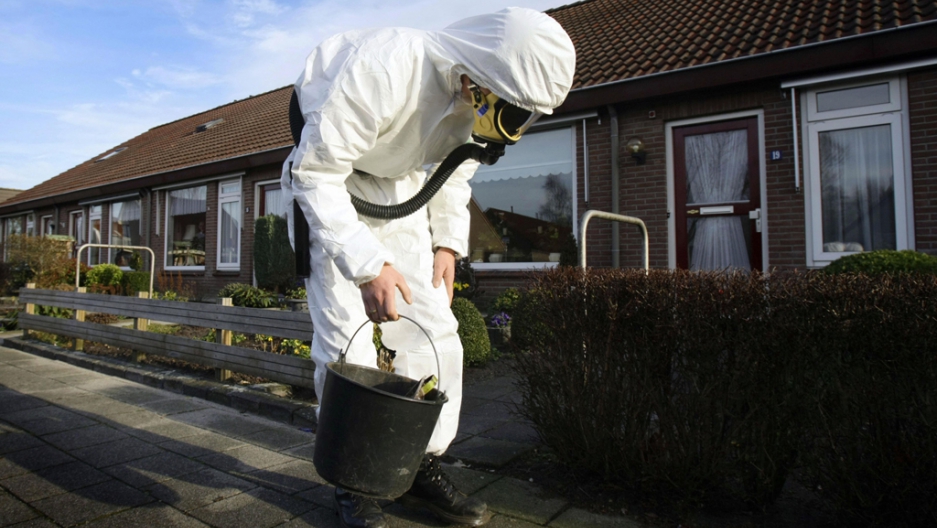 TORONTO, Canada — A visit by Prime Minister Stephen Harper to an obscure Quebec town would normally go unnoticed. But last Friday, his trip to Thetford Mines was seen by many as a defiant gesture toward the international community.

Thetford Mines, 125 miles northeast of Montreal, has been mining cancer-causing asbestos for more than a century. And Harper’s Conservative government last week made sure it will continue to freely export the hazardous product.

On the day of Harper’s visit, Canada blocked attempts to list chrysotile asbestos as a hazardous substance on a United Nations treaty called the Rotterdam Convention. His trip to Thetford Mines was a kind of solidarity celebration among the mounds of grey asbestos tailings.

At the U.N. conference in Geneva, where consensus was required to list a substance as hazardous, Canada was the only developed nation to oppose placing chrysotile asbestos on the treaty. Its position was backed by Ukraine, Vietnam, Kazakhstan and Kyrgyzstan — the kind of international support one doesn’t normally boast about.

The listing of chrysotile asbestos would not have banned its export. It simply would have forced exporters to warn recipient countries of the health hazards. But even this is unacceptable to the Canadian government, which, for the third time, blocked its listing internationally.

The World Health Organization has warned that “at least 90,000 people die each year from asbestos-related lung cancer, mesothelioma and asbestosis resulting from occupational exposures.” The Canadian Medical Association has called on the government to end its mining.

Canada is the fifth largest producer of chrysotile asbestos in the world, exporting about $90 million-worth each year. Almost all of it is exported to developing countries, including India (the biggest buyer), Pakistan and Sri Lanka. About 500 people work in the only two companies that mine asbestos, both of which are in the French-speaking province of Quebec.

Chrysotile asbestos is a fire-resistant material often mixed in cement and used in construction. In India it is widely used as roofing. (In Geneva, India pushed to have the substance listed as hazardous, as did the European Union and the United States.)

Critics describe the Canadian government’s position as grossly hypocritical. They note the government is spending tens of millions of dollars to remove asbestos from public buildings, including schools and the Parliament buildings. Even 24 Sussex Drive in Ottawa — the official residence of the prime minister — is being stripped of asbestos. If Harper doesn’t believe it is safe for him and his family to live with the stuff, why would he oppose warning families in developing countries about its dangers?

Most developed countries have stopped using chrysotile asbestos. The European Union banned it more than a decade ago. In Canada, its use is so tightly controlled that it is effectively banned.

In the province of Ontario, for instance, asbestos is considered so dangerous that exposure is limited by law to a maximum of one dust-like fiber in 10 cubic centimeters of air. Sophisticated monitoring and ventilation equipment is therefore needed to keep workers safe. The chances of such equipment being available to workers in developing countries are slim, say critics of Canada’s position.

Indeed, about a year ago, CBC TV showed shocking images of laborers in India working with chystoline asbestos. They worked without protective suits and their clothes were covered in fibers. Handkerchiefs tied across their faces were the only protection they had against inhaling the cancer-causing fibers.

“Asbestos is the greatest industrial killer the world has ever known. More people die from asbestos than all other industrial causes combined, yet Canada continues to be one of the largest producers and exporters in the world,” Pat Martin, a member of the New Democratic Party, told the government during a Parliamentary debate last week.

“Without exaggeration, we are exporting human misery on a monumental scale, and yet we are taking active steps to make sure they don’t even warn their customers — the developing nations where we are dumping hundreds of thousands of tones of asbestos,” he added. “Our position is morally and ethically reprehensible. Do they not realize the black eye they’re giving our country?”

Industry Minister Christian Paradis, who comes from Thetford Mines, replied by monotonously reading out the government’s position each time he was challenged.

“For over 30 years, the Canadian government has advocated the safe and controlled use of asbestos,” he said. “This can be done in a controlled environment, which is what recent scientific studies have shown.”

It’s a mantra that dumbfounds Canada’s Western allies. Canada is placing lives at risk, critics charge, with an indefensible position: What isn’t good for Canada is good for others.