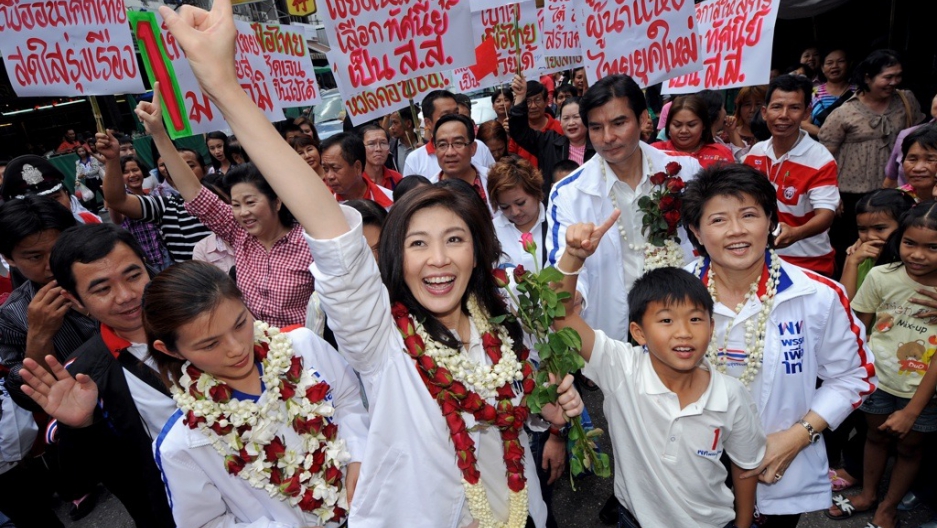 Yingluck Shinawatra, sister of fugitive Thai ex-prime minister Thaksin Shinawatra, greets her supporters during her election campaign at a market in Chiang Mai on May 21, 2011.
Credit: Pornchai Kittiwongsakul
Share

Editor's Note: Yingluck Shinawatra easily won the July 2 election, effectively reversing a 2006 military coup. Below is a profile of Thailand's new prime minister that was published a week before the election.

At rural campaign stops, Yingluck addresses supporters like a concerned sibling. Do you have enough money, brothers and sisters? Are you struggling to get by? Have the past few years left you unhappy?

Just over a month ago, Yingluck was the obscure younger sister of ex-Prime Minister Thaksin Shinawatra, famously deposed in a 2006 military coup.

“Since the coup, I’ve met many people who still have love, warmth and mercy to my family,” said Yingluck, calling herself a “provincial kid” to a crowd of supporters in her native Chiang Mai.

“Many people miss the old policies ... but after the coup, the opportunities to lead good projects to the people disappeared,” she said. “I feel a debt toward the citizens.”

A political novice, former telecommunications CEO and mom, Yingluck was considered an unlikely proposition when first introduced by her “For Thais” political party.

The gamble, however, appears to have paid off. As Yingluck has crisscrossed Thailand, campaigning in hill tribe garb in the mountainous north, donning a crimson hijab in the Islamic south, her popularity has soared.

These crowd-pleaser policies do little, however, to set her apart from other parties and their equally grand promises. What does make Yingluck different are her not-so-subtle hints that she can return her fugitive brother to Thailand or at least carry out his political will.

If victorious at the polls, she is expected to undermine the 2006 military coup, which ousted Thaksin under the curious pretext of “protecting democracy” from a corrupt but popularly elected tyrant.

Reviled by the old guard establishment, but admired by Thailand’s laboring classes, Thaksin has said he could be home by December if his sister’s party assumes power.

Party officials maintain they have no explicit policy to bring Thaksin home. But Yingluck has suggested a blanket amnesty covering all recent political malfeasance committed by both her allies and her rivals.

Such a move could perhaps scrub away Thaksin’s two-year prison sentence for a conflict-of-interest land purchase, which he has so far evaded. His opponents in the current ruling party call it a plot to whitewash his crimes.

Thaksin himself has been busy beaming reconciliatory vibes from his estate in Dubai. Using one of his favored mediums, Twitter, he wrote in Thai last week, “To those who I may have made unhappy, unsatisfied or offended, from the past to the present, I apologize and beg forgiveness. As for those who’ve verbally abused me, hurt and judged me, I forgive you too.”

That Yingluck is her brother’s stand-in is no secret. He has affectionately called her “my clone.” One of her party’s campaign slogans is “Thaksin thinks, ‘For Thais’ acts.”

Thaksin, a cop-turned-business mogul, is already known to pull strings from afar.

Yingluck has said she speaks to him twice a week “for encouragement.” She even went on to head her brother’s telecommunications empire after earning a master’s degree in political science from Kentucky State University.

In the words of Thailand watcher and Australian National University professor Andrew Walker, Yingluck is “Thaksin in a frock.” But if elected, Yingluck would not be the first Thaksin proxy premier.

There was Samak Sundaravej, a former anti-communist and temperamental grouch. He was followed by Somchai Wongsawat, Thaksin’s bespectacled and uninspiring brother-in-law.

Both men governed briefly after their Thaksin-backed parties won post-coup elections. And both of their parties were dismantled under various fraud and corruption charges.

Neither possessed Yingluck’s pop appeal. At a recent visit to a school packed with supporters, children elicited squeals worthy of a Justin Bieber concert and pawed at her clothes.

Pundits here have also taken notice of her looks. Veteran Thai historian Chris Baker in an op-ed largely about Yingluck’s hair wrote: “It’s long, lush and sensuous. It’s been lifted a little at the peak with gel, and swept at the tips ... in contrast to the clipped, sprayed and regimented bonnets of senior bureaucrats and army wives.”

But the current ruling party has also sought to link Yingluck to the “Red Shirts,” an anti-establishment street faction whose leaders now run in the same party. The coup, and unremitting court rulings against Thaksin, fuel the movement’s disdain for so-called “aristocrats” and “double standards.”

To force new elections in 2010, the Red Shirts walled off parts of Bangkok with bamboo stakes and doused the current premier’s home with human blood. An ensuing army crackdown left 91 dead, including a senior-ranking colonel and, according to Human Rights Watch, many unarmed protesters.

At a televised speech near the skeletal remains of a burnt-out shopping mall, torched in the final days of last year’s protests, Prime Minister Abhisit Vejjajiva called for voters to “detoxify” Thailand and rid the nation of Thaksin’s influence. His deputy went a step further, proclaiming that a vote for Yingluck’s party is a vote for “terrorists.”

Still, various polls show a sizable lead for Yingluck’s party. Its members are unlikely to score an outright majority, but they could form a government by holding hands with one or more smaller parties led by provincial political clans.

The ‘For Thais’ party is also warning that the military leaders who plotted the last coup may find a way to thwart their potential victory. “There are outside powers, outside the system, who will not permit us to take power even if we win the majority,” said Nattawut Saikeau, a Red Shirt captain and For Thais candidate. “You shouldn’t ask us to accept this situation. It’s unfair.”

What happens, however, if they win and assume the reins?

According to campaign promises, they will erect 10 elevated train lines, guarantee a nearly $500 per month salary to all college grads and, perhaps most ambitiously, wall off the Gulf of Thailand with 18 miles of concrete to expand Bangkok’s city limits into the ocean.

Paying for that, Yingluck’s rivals have countered, will be difficult if not impossible.