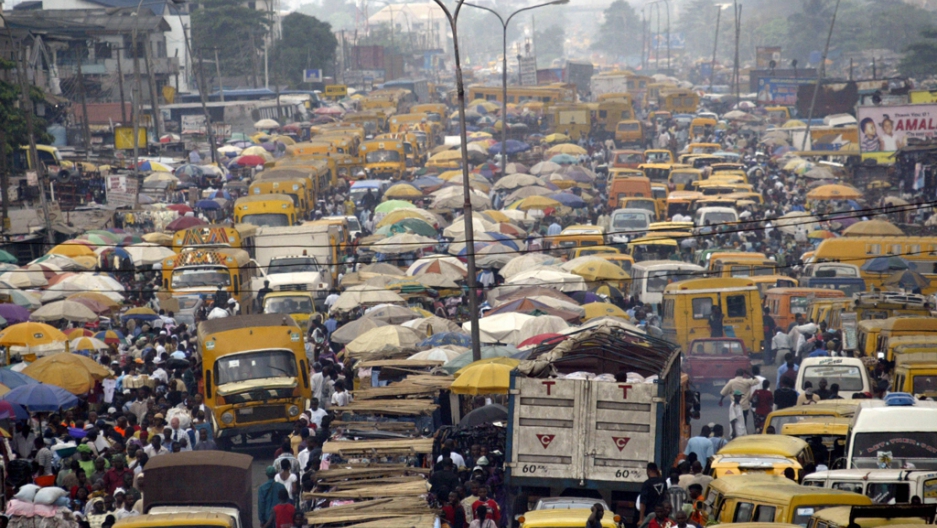 This is Wazobia — the only Nigerian station to broadcast fully in pidgin, the country’s fast and inventive “broken English.” The station has been a hit since going on air in 2007.

Wazobia DJs greet listeners by asking "how de body?" or "how you dey?" Rapid news bulletins describe Somali pirates as "no go 'gree people," meaning those who are hostile or won’t agree. One report said that a local bus crash resulted in "12 people dem get visa to see Baba" (12 people getting a visa to see God).

Many Nigerians consider this their lingua franca, especially in the mostly Christian southern states. Spoken at breakneck speed and constantly toying with English and local languages, pidgin certainly seems a fitting medium for Africa’s most populous country, a chaotic nation that struggles to contain 150 million people, 250 ethnic groups and over 36 billion barrels of oil.

“Nigerians have found a station that goes down well with them ... in a language they understand,” says Diplomatic OPJ, a Wazobia DJ who does the evening rush hour show. He adds that the station now has regional wings in Abuja, the capital, and Port Harcourt, in the oil-rich delta.

"With pidgin, our listeners feel free. We can’t make mistakes when we talk pidgin, because it’s a language that has no dictionary," OPJ said. "So we get everyone calling in — market traders, street hawkers, people who are illiterate.”

English, Nigeria's official language, and the main indigenous tongues of Yoruba, Hausa and Igbo are often neglected by a crumbling education system. Despite Nigeria’s vast natural resources, and its position as sub-Saharan Africa’s second-largest economy, endemic corruption leaves most people without even basic services. More than 80 percent of the population live on less than $2 a day, according to the World Bank.

“The government is not doing many things to encourage the teaching of languages in schools,” says Harrison Rotimi Adeniyi, head of African Languages at Lagos State University. “[Many university students] are neither proficient in English nor their local languages.”

Nigerian pidgin is thought to have emerged nearly 600 years ago, when European traders reached the country’s coast and met African chiefs. Both parties needed a form of broken English to negotiate sales of palm oil and slaves. Pidgin is now estimated to be used by tens of millions of Nigerians. Variants are spoken in nearby Ghana, Liberia and Sierra Leone.

“Pidgin reflects the Nigerian character ... it’s very dynamic,” says Christine Ofulue, a linguist at the National Open University of Nigeria. “It develops and builds vocabulary very quickly. There is a lot of wordplay.”

Pidgin’s humor and inventiveness do, indeed, seem at home in Lagos, which vies with Cairo as Africa's largest city, and which is home to some 15 million people living by their wits. Jobless youths charge commuters for driving down their streets and pounce in gridlock traffic to forcefully wash cars. During this year’s voter registration drive, they bagged the first places in the lines at dawn and sold them as people arrived.

However, as well as raising a smile, pidgin newscasts might also be helping Nigerians to become more politically aware.

“My own mother does not understand what the government are saying,” OPJ said, referring to political speeches that are typically in traditional English. "Wazobia helps her understand."

Fela Kuti, Nigeria’s most famous musician, also understood the power of pidgin. Kuti's afrobeat songs, which decried the corrupt dictators of the 1970s and 1980s, used pidgin lyrics to spread a message to the masses about leaders who "passy passy" cash.

Some Nigerian academics are thus calling for pidgin to be made an official language. “We want to change the perception that this is a bastardisation of English,” says Ofulue, one of a small team of academics who are putting together the first pidgin dictionary and orthography.

“This is a language in its own right ... it has its own systems. It has all the tenses and pronouns.”

For most Nigerians, pidgin is still looked down on as the medium of the uneducated. Fluent English means better job prospects — especially as Nigeria hopes to follow India’s example and tap into the lucrative market for call centers.

However, for OPJ, pidgin has catapulted his career to new heights. He spent 16 years speaking the "Queen’s English" at state-owned radio stations and gained relatively little renown. At this interview at a burger bar in Lagos, he is recognized by many and high-fives passing fans.

“Every day at my old station, after my broadcast, they would play the tapes back and my boss would say: ‘You misused this adjective, your pronunciation was wrong.' It was called ‘radio cleaning,’” he recalls.

“But, in just 18 months at Wazobia, I’ve become more popular and famous than during my 16 years elsewhere.”