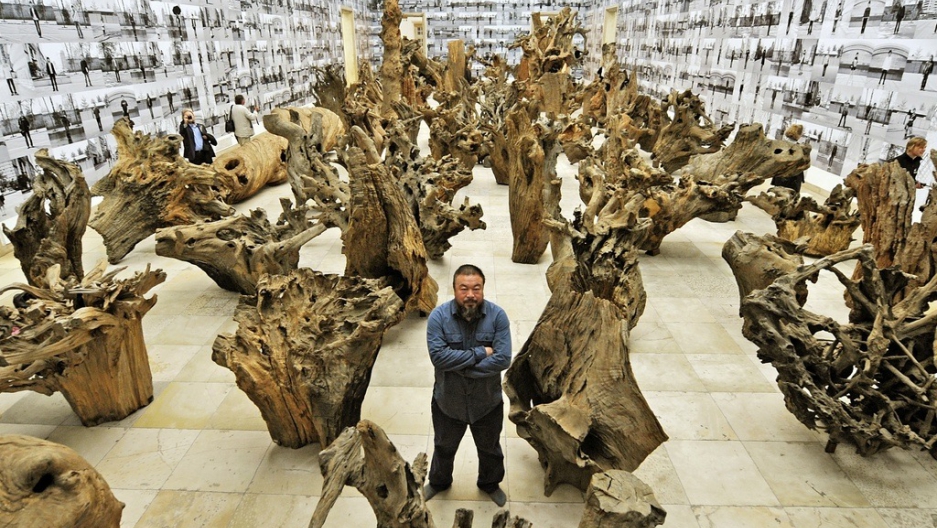 Chinese artist Ai Weiwei poses in the middle of his work made of 100 pieces of trees and called "Rooted Upon" at the Haus der Kunst in Munich on Oct. 9, 2009.
Credit: Joerg Koch
Share

BEIJING, China — China has released two of its best-known critics in the past week, but managed to silence both of them. And they’re not alone.

In the months since failed calls for revolution in Beijing triggered a massive security response, scores of critics of the regime have been muzzled and gagged through various means. In every case, it appears authorities have made it clear the risk of speaking out is greater than the burden of keeping quiet.

Artist Ai Weiwei was released on bail Wednesday, while activist and blogger Hu Jia completed his three-and-a-half-year prison term and reunited with his family early Sunday morning. Both men, who have at various times been international media celebrities for their fearless criticism of the government and calls for freedom of expression in China, have said they must now be quiet.

So how does the government effectively force its fiercest critics into silence? Simply put: Intimidation, coercion and hints or threats of worse to come. That’s not to say all dissent has been shut off, but it seems the criticism most visible to the outside world was a prime target.

“What people are being told is not that ‘You have to be quiet, don’t go on Twitter, don’t talk to the foreign media,’” said Joshua Rosenzweig, senior manager at the Dui Hua Foundation, a human rights group that focuses on detainees and prisoners. “Those are the channels being shut down, and I think it’s fair to say that’s because the government has less control there.”

Speaking by phone to a television station in Hong Kong, newly released Hu Jia explained how pressure tactics worked in his case. Hu’s sentence includes a one-year loss of political rights, which does not specifically bar him from posting online.

"Once I saw my family, I understood how much I owe them, especially my parents, my wife and my kid. I realize I've done nothing for them. There is a Chinese saying that 'patriotism and filial piety don't go hand in hand,'” he said.

“They told me to be a good citizen and don't clash with the system. This system is very brutal. It uses government's power to violate people's dignity. I can only tell my parents, I will be careful.”

Ai Weiwei, who was detained for nearly three months without formal charges, met briefly with journalists at the gate of his studio, saying he hoped they understood but he couldn’t say anything. Ai is out on bail, and again, not specifically legally barred from Twitter or other platforms, but he’s not talking.

Ai’s associates, rights lawyers, bloggers and artists caught up in the heavy-handed crackdown this spring have all gone largely silent.

“Whatever they did, and it was probably different in each case, the goal was intimidation,” said Rosenzweig. “The goal was to make it clear to people that there are new rules, there’s a new sheriff in town. They need to stay further away from the line.”

It may seem surprising that Ai, Hu and others, extremely outspoken and previously unafraid, have fallen quiet. But activists and others say that when authorities want to quell criticism they create problems and leave an impression that worse may follow. Some leave China and those who stay either fall silent or continue to face worsening problems.

Wan Yanhai, a well-known Chinese AIDS activist, is one who chose to leave. After repeated detentions and harassment, Wan fled to the United States 13 months ago.

“It is a combination of factors which pushed me to leave, including repeated government harassment, government controlling of foreign funding to Chinese [non-governmental organizations], and other issues,” he said via email. “And I was really tired after repeated harassment.”