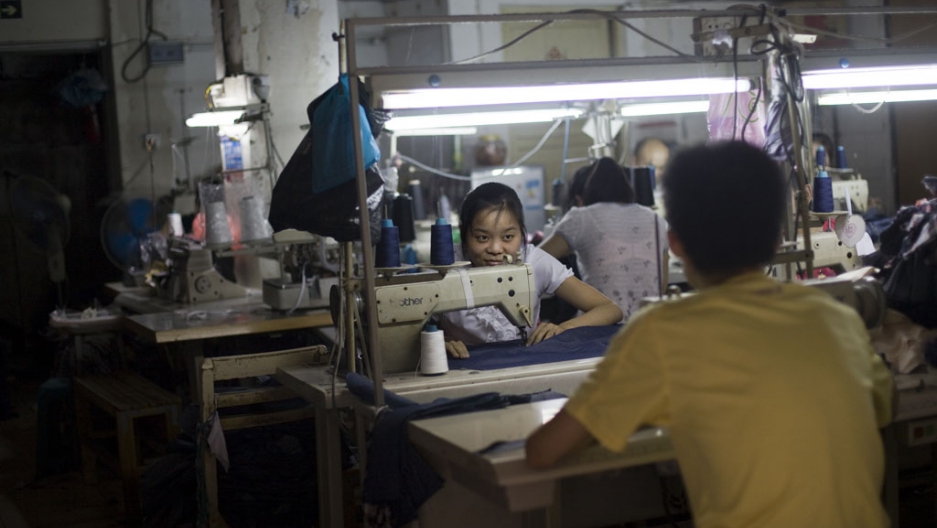 TANGXIA, China — One hundred ostentatious luxury mansions clustered on a strip of land separated from the town by lake couldn’t be a clearer emblem of the widening chasm between haves and have-nots the heart of China’s factory zone.

It’s not just that these new homes, some as high as seven stories, are owned by the rich. What has sparked controversy in this factory town near Guangzhou is that more than half of the mansions are owned by local government officials, who, on paper, don’t earn much at all. The government confirms it is investigating reports that officials used their influence to buy the land for a song, built the development and some plan to sell the homes for more than $1 million apiece.

Across the moat, a group of men drinking beer and fishing laughed about what’s been dubbed “Tangxia’s Zhongnanhai,” a nod to the exclusive compound where China’s rulers live in Beijing. The men, all of them migrant workers who have lived here for years, say they’re not at all surprised by the homes.

“They have money and we don’t,” said one. “There’s nothing we can do about it.”

This in a small town where factory workers — mainly poor migrants from other parts of China — still make a couple hundred dollars a month and live in overcrowded company dorms and cheap apartments.

“We’re just workers, ordinary people,” said Zhang Jinxin, a 20-year-old factory worker from Jiangxi province, who shrugged while gesturing toward the houses. “All governments in China do these kinds of things.”

Scores of migrant workers across the Pearl River Delta have vented frustrations this spring and early summer in protests, labor strikes and riots. It’s unclear whether the number of uprisings in the south is any greater this year than in other recent times, because there are no official numbers.

Yet it is apparent that many migrant workers, the fuel for China’s manufacturing machine, are evermore aware of the gap and getting increasingly fed up with seeing little gain for their years of grueling work.

“They’re dissatisfied with their working conditions, and at the same time, they’re dissatisfied with local governments,” said Zeng Feiyang, who runs a non-profit agency that advises migrant workers in Guangdong. “Their work environment hasn’t changed in many years, and in some cases has gotten even worse, so the workers have become angrier.”

In several cases, Chinese officials and media have laid blame for the wave of southern restlessness on regional disputes, tough economic times for manufacturing and dissatisfaction with a growing wealth gap. All these theories appear to be partly true.

However, it seems the real root of the discontent lies squarely with the government. Migrant factory workers are upset over local government corruption, and enforcement of the decades-old national law that relegates them to live without access to many basic services when they move away from home.

Take Xintang, for example, the denim production center where workers rioted for three days this month. Locals say 80 percent of the residents in Dadun, the village overtaken by riots, came from elsewhere, though most have lived in Xintang for years. Still, they are squeezed by local police for “protection money” and refused basics, like the right to ride motorcycles, which many use to get around and make extra money as taxis.

“The local security will beat us if they catch us even riding motorcycles here,” said Yang Guo’er, a 23-year-old denim worker from Sichuan. “The problems here were all because of the local government and police.”

Though the riots were blamed on regional disputes between factory workers from Sichuan province and locals from Guangdong, people from both sides say that’s not true. It was the maltreatment of migrants at the hands of government-sanctioned security forces and years of abuse that boiled over. Troops of paramilitary are still patrolling the streets in Xintang and dozens have been arrested in connection with the riots.

“They are treated like Chinese people who migrate to another country,” said Zhan Anlong, a Xintang native who runs a denim trading business. “Migrants are treated like second-class citizens.”

Tensions remain high elsewhere. At a Korean handbag factory last week near Guangzhou, 4,000 workers went on strike for three days over wages, and reluctantly returned to work after police descended and bosses threatened to fire them. Earlier in June, thousands protested in Chaozhou after a factory boss brutally beat a worker and his father when they demanded back wages.

For now it seems the government’s response is to send in large patrols of paramilitary and police to quash disturbances. But without core changes to the system, including improved working conditions, wages and more rights for migrants, the problems aren’t going away.

“If the entire system seems unfair to the workers, and nothing is changed, this could happen again and again,” said migrants’ advocate Zeng.