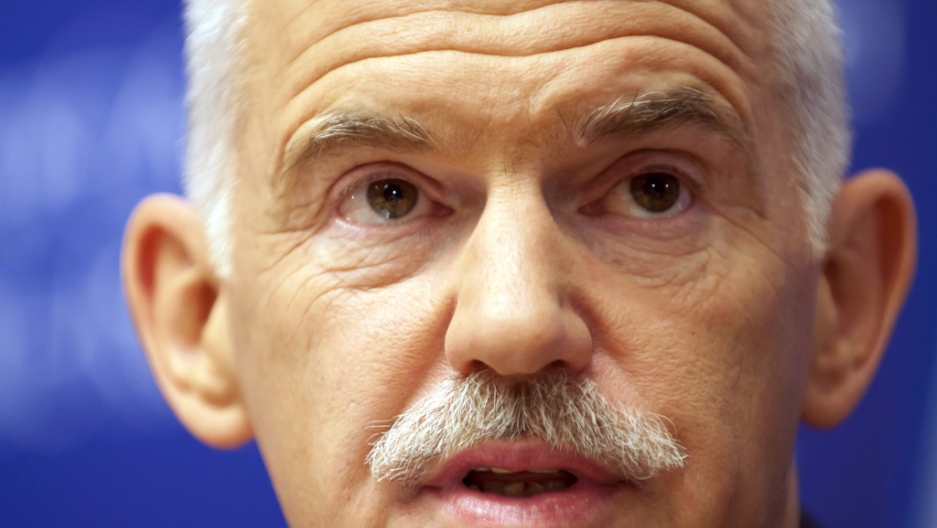 Greek Prime Minister George Papandreou addresses a press conference at the end of a summit of the EU heads of State on June 24, 2011 in Brussels.
Credit: Jean-Christophe Verhaegen
Share

ATHENS, Greece — The Papandreous have dominated Greek politics for more than half a century. But last week, Prime Minister George Papandreou, whose father and grandfather had both been premiers before him, nearly walked away from it all.

Greece was at a breaking point. A year after narrowly avoiding a default on its massive national debt, the country was facing bankruptcy again, even after instituting a series of harsh austerity measures in exchange for international bailout loans.

The spending cuts and tax hikes had worsened the recession, and people had lost their jobs and seen their income shrink. Anti-austerity demonstrators have camped out in Syntagma, the square across the street from parliament, for weeks. Polls show that 87 percent of Greeks believe the country is headed in the wrong direction.

To make matters worse, the Europeans were threatening to withhold the latest installment of bailout loans — which Greece needed by July to avoid a default — unless Greek politicians showed unity. But even deputies from Papandreou’s own Panhellenic Socialist Union (PASOK), which his mercurial father, Andreas, founded in 1974, were rebelling.

“It is an impossible position to be in,” said Stathis Kalyvas, a Greek professor of political science at Yale. “The debt crisis is so dire that there was never much room for negotiation in the first place. The government was tasked with making economic reforms in a year that should have been made over the course of 30.”

But Papandreou, known for favoring calm discourse even in the bare-knuckles fight club of Greek politics, did the unthinkable for a politician from Greece’s biggest political dynasty. He called up main opposition leader Antonis Samaras, his old roommate at Amherst College, with a proposition.

The premier offered to step down if Samaras and the conservative New Democracy party would support the austerity measures and form a coalition government with PASOK. But even as the Greek media hysterically reported his pending doom, and on his 59th birthday no less, the premier is said to have changed his mind after pressure from his inner circle.

“George, no Papandreou has ever resigned,” his brother Nick said, according to a report in Ethnos newspaper. “Prime ministers do not resign.”

“Maybe it wasn’t his own choice to follow his father’s legacy and become a politician,” said Alexis Stamatis, a novelist and commentator on Greek society. “It was more of a burden. And he wasn’t up to it.”

It’s a Herculean task to steer the country through the crisis while also negotiating with fractious euro zone countries, but Papandreou also suffered from a lack of clear economic policy, said Yanis Varoufakis, a political economist who served as Papandreou’s speechwriter between 2004 and 2006.

“He had to go through a crash course in economics this year,” Varoufakis said. “He was elected on a completely different, pre-crisis agenda. Maybe if he had been elected in 2004 things would have been different, for him and for the country. But in this time of crisis, he also lacked the caliber to deal with his foreign partners.”

Papandreou, a multilingual sociologist who was born in St. Paul, Minn. and educated in the United States and Great Britain, was initially seen by many as adept at handling the Europeans. A former foreign minister, he was well liked by his European peers and had an easy rapport with them. But he had a harder task with Greeks, who have never quite viewed him as one of their own.

Papandreou is a health-conscious cyclist in a nation that loves its cafes, cigarettes and greasy-spoon tavernas. He drives a Prius and loves to talk about green energy. His father, Andreas, was a fiery populist who was known for his electrifying speeches. But Papandreou is a genial, if uninspiring, speaker who does not seem to enjoy the aggressive dialogue found in Greek politics, said Stamatis, the novelist.

Papandreou is viewed as a sincere politician, even if Greeks cannot identify with him, said Christoforos Vernardakis, president of the polling firm VPRC and a political science professor at the Aristotle University of Thessaloniki.

“He is not cynical and does not share the amorality of some of his ministers,” Vernardakis said. “But he failed to inspire people. His accession to power had more to do with the collapse of the previous government and the power of his family name. He would have been better as the leader of an NGO or as a university professor, but not a prime minister in a time of crisis. And he still doesn’t get it: He seems to care more about what his foreign partners think of him and less what his own people think.”

At the street demonstrations, many Greeks are saying just that. They hold up posters that depict Papandreou draped in the American flag, a jab at the International Monetary Fund, and call him Jeffrey, a decidedly non-Greek nickname that many of his political enemies also use.

“He does not understand us,” said Vangelis Argenides, a 50-year-old music teacher who protested outside parliament earlier this week, during a confidence vote for Papandreou’s government.

Now, Papandreou’s administration is widely viewed as being on life support, even after a cabinet reshuffle last week. In that reshuffle, he promoted one of his top foes in the party, Evangelos Venizelos, to the key position of finance minister and deputy prime minister.

Though some polls show that most Greeks do not want early elections, the political and social atmosphere in the country is tense enough to turn at any time, says Aristides Hatzis, a law professor at the University of Athens.

“Greeks have lost trust in all politicians, who have abused the political system for years. That system is collapsing now, and Papandreou is paying the price,” Hatzis said.