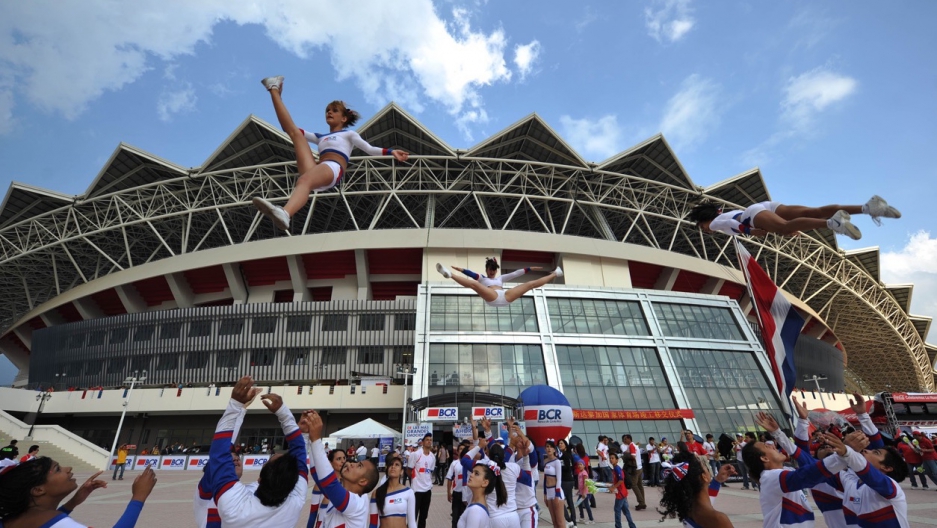 The new Costa Rican National Stadium — brought to you by China — just before its opening ceremony in San Jose in March 2011.
Credit: Yuri Cortez
Share

SAN JOSE, Costa Rica — How do you say “pura vida” in Mandarin? Literally “pure life,” it’s one of Costa Rica’s most ubiquitous phrases used for expressing anything from gratitude to a simple salutation, or just to say “good vibes, man.”

The Chinese have been getting all sorts of pura vida lately.

Costa Rica will lift trade barriers in July on a slew of Chinese products, and vice versa, thanks to the countries’ bilateral free trade agreement, which allows goods to flow between them tariff-free.

The deal represents China’s closest such trade pact to the U.S. border, having inked agreements with Latin American countries Peru and Chile, a trend analysts say is part of China’s surging soft power in Washington’s “backyard.”

To get to this point, Costa Rica dropped longtime ally Taiwan in 2007 in favor of diplomatic ties with the People’s Republic of China, which has since become the world’s No. 2 economy. Once ambassadors were appointed, the path toward a cozier trade relationship was wide open.

Trade talks officially began in January 2009. With the Costa Rican legislature’s approval in May of this year, President Laura Chinchilla finally signed the free trade agreement into law in June.

When it became clear that Costa Rica would not use its new closeness to Beijing to press its leaders on human rights issues, the U.S. diplomatic corps in San Jose expressed dismay at what it called a “departure for the little country with the big love of human rights,” according to a classified cable published by newspaper La Nacion provided by WikiLeaks.

In appreciation for dropping Taiwan, China covertly purchased $300 million in Costa Rican bonds and quite publicly built a gleaming new 35,000-seat sports stadium. The bonds sale was meant to be kept secret but Costa Rica’s constitutional court forced the government to make the details public.

Then more gifts: 200 new police cars, $40 million credit line for small businesses and plans to share the bill for an oil refinery upgrade.

(Read: Why is China spending billions in the Caribbean?)

With the free trade agreement in effect, the Chinchilla administration hopes to better position a diverse offering of Costa Rican exports — from beer and coffee to hi-tech computer parts — within the world's fastest-growing market of more than 1.3 billion people.

Foreign Trade Ministry officials say the agreement will bolster bilateral trade with China worth $1.27 billion last year, up from about $90 million in 2000, making the Asian giant Costa Rica’s second trading partner after the United States.

The administration also intends to brand the country as a springboard for Chinese traders and investors seeking easy access to markets across the Americas.
By moving operations to Costa Rica, said Trade Vice Minister Fernando Ocampo, Chinese firms can cut shipping time to the United States and avoid U.S. trade restrictions by gaining access to Costa Rica's free trade benefits with the world's largest economy.

Some analysts have doubts as to how much investment these closer ties will draw. “Given that there are no natural resources to speak of in Costa Rica, unlike other countries like Brazil, Peru or Colombia, don’t expect a trailer load of Chinese investment in Costa Rica,” said Boris Segura, Latin America analyst with financial services group Nomura Securities in New York.

The Chamber of Industries complained from the outset that the trade talks would end in a bad deal for Costa Rica because it would open the floodgates to imports from a country that’s “not a trusted partner."

Their concerns included doubts about China’s treatment of workers, the health standards of its goods and its shear capacity to crank out and ship products in volume, threatening to spark price wars with local producers.

Boosters of the agreement with China counter the criticisms by pointing out that China is already an important commercial partner and the free trade agreement applies clearer guidelines to that relationship, while easing the tax burden of exports and imports. As for price competition, trade officials see the influx of cheaper goods as a positive for the Costa Rican consumer.

Costa Rica’s neighbors in Central America — none of which have followed suit in ditching Taiwan — are nonetheless making business deals with China including imports and massive energy projects.

China has traditionally avoided close economic ties with allies of Taiwan, a self-ruled island claimed by Beijing as part of China. A landmark trade deal last August began to change that policy, binding the economies of the island and the mainland and making it easier for either to do business with friends of an old foe.

While Washington has remained largely mute on China’s growing influence in the region, policy observers are cautioning the U.S. not to miss out.

The value of goods traded between China and Latin American countries reached $183 billion in 2010, which is about 14 times what it was in 2000, according to Jiang Shixue, vice president of the Chinese Association of Latin American studies.

Whatever the motive behind this, companies are keen to start relishing in the new trade deal’s benefits.

At a recent business forum in San Jose, eager Chinese and Costa Rican entrepreneurs were in deep courtship in what appeared to be the corporate equivalent of “speed dating.”

She said, “There is a good opportunity for our company. (Costa Rica) has a duty-free policy towards different countries around Latin America. It’s a bridge.”

In reply to all the pura vida in the air, the Mandarin-speakers expressed their thanks, “xie xie.”

Why is China spending billions in the Caribbean?