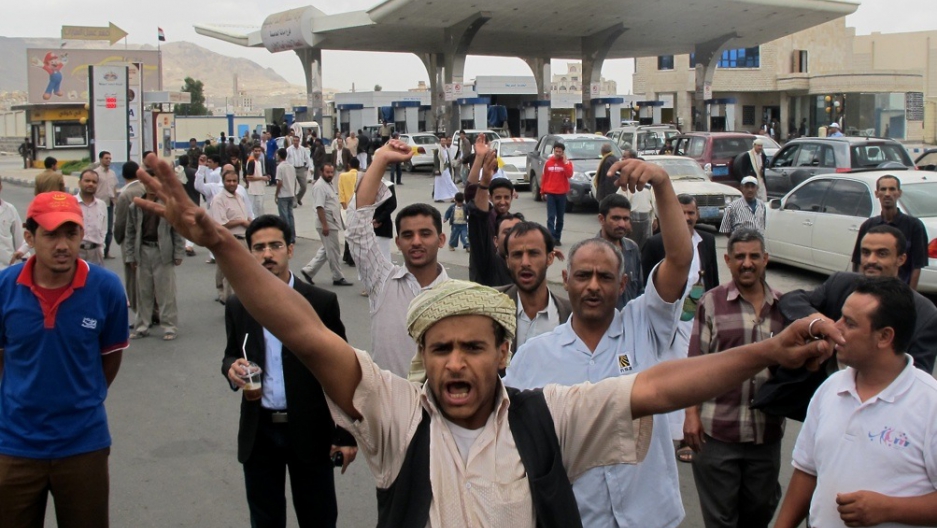 Yemenis shout slogans at a petrol station amid a fuel shortage in the Yemeni capital of Sanaa on May 5, 2011.
Credit: Gamal Noman
Share

SANAA, Yemen — Rumors that Yemen’s wounded president would return to the capital today have been circulating throughout the capital since a government official announced that the president’s personal jet had been sent to Saudi Arabia, where he has been undergoing treatment.

Should the speculation be true, Saleh would be coming home to an already tense atmosphere and to a city where black market fuel sellers are the only ones keeping the economy afloat. Many of those watching the fireworks displays did so from their cars, wrapped in blankets as they waited in mile long lines overnight to purchase a single tank of gasoline, which now costs nearly nine times the usual price.

Tribesmen from surrounding villages are taking advantage of the fuel shortage by bringing their gasoline stores into the city and selling them at even higher prices than fueling stations, creating a lucrative underground market.

“I’m a teacher but I also have to drive this taxi to supplement my income. I don’t have time to sit in long lines, I have to go to my class, so I pay more,” said Nabil Ahmed Al-Awami as fuel was pumped into his car from a drum in the back of a pickup truck.

“God willing, Saleh will return soon to put an end to this crisis. The regime is corrupt, but Saleh himself is a good man. Although I heard he’s going to Germany for more treatment. Only God knows when he will return,” shrugged Al-Awami after haggling over the price with the black market salesmen.

As fears of an economic collapse mount, and of a return to the violent clashes that preceded Saleh’s emergency departure, so does tension among residents of Sanaa who are trying to survive in these times of extreme uncertainty.

Sporadic fighting and even gunfire has at times broken out among those waiting to fill up their cars and taxis with gas. The waits often lasts longer than 24 hours and several times throughout the day a frustrated few attempt to push through to the front.

“People come through swinging wooden clubs at people. A lot of them are carrying AK-47’s. I worry that fighting could spread if people stop using the clubs and start using their guns,” said Bashir Mohammad, as he waited in line for gasoline.

Yemen’s youth protesters and political opposition are pushing for Saleh’s deputy, Abed Rabbo Mansur Hadi, who is now acting president, to form a transition government and hold presidential elections as soon as possible to prevent things from spiraling out of control.

“A transition of power will solve this economic crisis and restore order to the cities. Should Saleh return, the shortages and unrest will only worsen. We’ve pledged to remain in Change Square until his entire family and regime is out of power and we will not back down from that,” said Adel Al-Surabi, a leading protest organizer, who has slept in a tent in front of Sanaa University now for five months.

According to some, however, it might be too late for any new government to stave off an economic collapse.

Along with fuel shortages, persistent power outages are widespread throughout the country, leaving some without power for days.

The inconsistent access to electricity is hurting Yemen’s farmers in particular. Many farmers use electric pumps to bring water up from wells to irrigate crops. Without reliable electricity, many of them turned to diesel generators to keep their crops from withering in the hot sun.

Now, as fuel becomes more scarce, many farmers have no alternative other than to watch their crops die — the latest in a long line of humanitarian disaster facing Yemen.

This one, however, could have the seriously dire results. With coastal imports finding it harder to make their way inland to cities like Sanaa and Taiz, an already malnourished population is becoming wholly dependent on domestic food production for their supply of daily bread — a supply that is quickly running low.