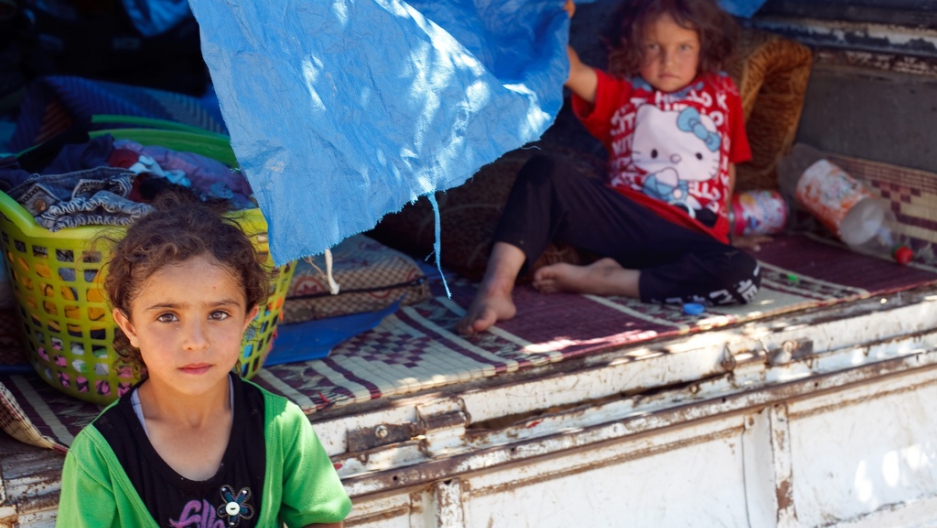 Syrian children play in the shade provided by a pickup truck at a camp on the Turkish border.
Credit: Jodi Hilton
Share

HATAY, Turkey — Syrian troops surrounded a makeshift refugee camp in Syria, just across the Turkish border, on Thursday, forcing thousands more refugees to flee for Turkey, a spokesman for the Turksih government said.

Nazir, a 22-year-old economics student who has taken leave from his studies to work as a political activist, said everyone was leaving the Syrian camp at Kirbhat al-Jouz.

"All the people are running. It's like a tsunami," Nazir told GlobalPost. "My friend called and told me the [Syrian] army is coming closer and closer."

Nazir and several other activists escaped to Turkey, where they were taking refuge at the home of a local trafficker. He said he's not going to return to Syria.

"If they find me, maybe they will kill me," he said.

When asked if the activists planned on taking up arms against the regime of Syrian President Bashar al-Assad, he said, "I'm a university guy and a basketball coach. How can I fight? I fight with laptop."

(From GlobalPost in Damascus: The real voices of the Syrian uprising)

On Friday, more than a dozen Syrian soldiers deserted and crossed the border into Turkey, according to unconfirmed reports from a trafficker who lives near the border. The trafficker told a French journalist that of the 14 soldiers who defected, two were colonels in the Syrian army.

One recently defected soldier, dressed in fatigues, told his story of desertion to journalists earlier this week. Fearing for his safety, the 26-year-old declined to give his name but said his family came from Jisr al-Shughour and fled to Turkey when they saw their city devastated by Syrian troops.

"I am going back and forth across the border to help distribute water, food and supplies," he said.

"I am afraid," he said, adding that he had no choice but to desert. "I didn't want to shoot my own people."

Jisr al-Shughour is completely empty, he said, despite claims by the Syrian News Network that people are returning. It was in Jisr al-Shughour that the bodies of 120 soldiers were discovered, some in a mass grave.

"The government says that a band of armed terrorists shot and buried them. But the truth is that those soldiers were assassinated when they refused to shoot their own brothers," he said.

Now, he says, his only option is to take refuge in Turkey. He says other soldiers have also defected.

"I hope there will be many more."

Nazir, the activist, said the Syrian government is manipulating the news. They captured his brother, he said, and made him proclaim that Nazir was a terrorist on Syrian television. The Syrian activists are now monitoring the situation from their Turkish hideout.

When they receive amateur videos from inside Syria, they post them to YouTube. They try to get information to media outlets outside of Syria.

Ziad, another activist, said the Syrian troops closed routes to the Turkish border a few days ago. But some people are still sneaking through the mountains to get to Turkey.

In Reyhanli, a Turkish city on the way to Aleppo, a neat line of white tents sprawls across a former campsite meant for pilgrims making their way to Hajj.

These days, every few minutes, a minibus enters its gates, unloading passengers coming from Syria. The Red Crescent and Turkish government are building a fifth camp, which will be able to accommodate many thousands more refugees.

"For now, we are quite prepared and can accommodate many more people. But if the numbers exceed hundreds of thousands, it might become a difficult case," said Emre Manev, a spokesperson for the Turkish Ministry of Foreign Affairs.

On Tuesday and Wednesday, gunshots were heard at the encampment on the Turkish border. A woman named Rana, 26, holding her 4-month-old son wiped tears from her eyes as she described fleeing from her village.

“Look how we’ve been forced to live in a tent,” she said. “We don’t have any more milk or diapers.”

Rana’s family fled after hearing stories of advancing soldiers attacking civilians and women being raped near her village of Kherbet al-Jouz. Inside her makeshift tent were a few blankets, some pots and pans for cooking and a basket of undersized apples.

"We cannot live with the tanks near our houses," she said.

Nearby, 63-year-old Abu Ahmed sat under a tree with one of his 40 grandchildren. His twelve children dropped him and the grandchildren at the camp and went back to their village to tend their orchards.

"I care for all of them," Abu Ahmed said. "We have to hide because we know what [the Syrian troops] did in Jisr al-Shughour.