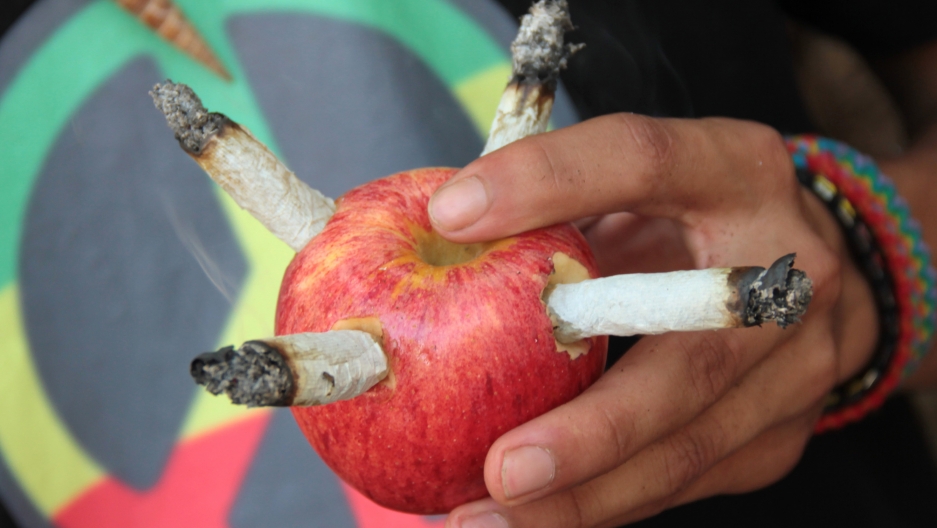 A man shows marijuana in an apple during a demo for its legalization in Medellin, Colombia on May 7, 2011. Hundreds of youngsters marched in several events throughout Latin America, under the slogan "Cultivate your rights."
Credit: FREDY AMARILES
Share

Genetically modified marijuana is reportedly a hit with Colombian farmers who say the "enhanced" plants are "more powerful and profitable," according to Agence France-Presse.

With varietal names like "creepy," who can doubt them?

Local authorities said the arrival of genetically modified seeds from Europe and the United States have allowed "a bigger production and better quality at the same time."

The head of one farm told AFP that a genetically modified variety known in Europe as "La Cominera," from a seed modified in The Netherlands, is sold for about 10 times the rate for "normal" marijuana.

GlobalPost reports from Amsterdam: Amsterdam fights for your right to smoke pot

One owner of a greenhouse an hour's drive from the city of Cali, said she can sell the modified marijuana for 100,000 pesos ($54) a kilo (2.2 pounds), which is nearly 10 times more than the price she can get for ordinary marijuana.

"La Cominera," is named for the Colombian village where it grows.

La Cominera's" higher value is due to its increased concentration of THC, the plant's principal active ingredient, and the modified plant verges on an 18 percent concentration level, compared to a normal marijuana plant's 2 to 7 percent, said the researcher.

Another farmer tells AFP: "I don't like growing marijuana, but it ended up that way. I received a loan to grow coffee, but I was drowning and I had to sell my harvest very cheap. My sister told me it would be better to plant marijuana."

Residents of Cali say they cannot sustain themselves on coffee and banana crops alone, because of price fluctuations and the difficulties in reaching markets in time, due to a poor road network.

Police say that in this region of southwest Colombia, marijuana is the principle method of financing FARC — the Revolutionary Armed Forces of Colombia — Latin America's largest and longest-fighting insurgency.

According to organized crime website InSight, the FARC have become the country's primary marijuana dealers, with the majority of seizures, normally between one and four tons, occurring along the Pacific coast, particularly in Cauca.