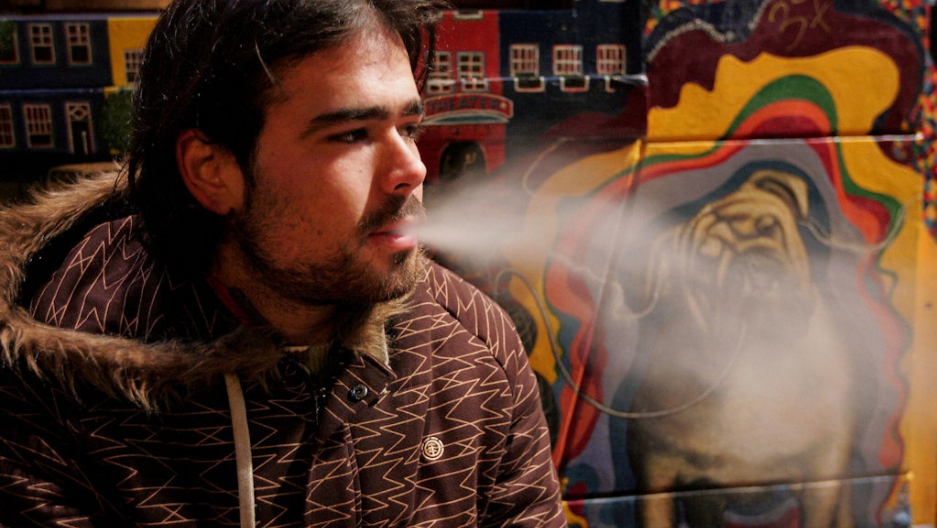 A Spanish tourist smokes a joint in front of the Bulldog coffee shop in the red light district of Amsterdam on Dec. 8, 2008.
Credit: Anoek de Groot
Share

AMSTERDAM, The Netherlands — The city of Amsterdam is preparing to fight for tourists' right to party.

The capital's town council, backed by the tourist board and local campaigners, is opposing a new law proposed by the Dutch government that would ban foreigners from frequenting the city's cannabis-serving coffee shops by 2012.

“If tourists are denied access to coffee shops, illegal sales and drug dealing on the streets of Amsterdam will increase,” warned Mayor Eberhard van der Laan. “Amsterdam does not want to facilitate soft drug use by tourists, but to help those who wish to use drugs to do so as responsibly as possible.”

Van der Laan is consulting with the center-right national government to convince it, “that these measures will be counter-productive for Amsterdam,” said City Hall spokeswoman Iris Resheef.

In May, the lower house of parliament voted to back a bill that will oblige The Netherlands' 400 coffee shops to become member-only clubs. Only Dutch citizens will be able to obtain a so-called “weed pass” allowing them to enter.

The measure came after appeals from smaller towns along the country's southern and eastern frontiers that have complained about an influx of rowdy, drug-seeking youths from Belgium, Germany and France.

The bill still needs to pass the upper house of the Dutch parliament and may face a legal challenge from campaigners who say it infringes on the country's constitution by discriminating against foreigners.

“We recognize that there are problems in cities on the border with drug trafficking and so on, but we don't have that here,” said Machteld Ligtvoet, head of communications at the Amsterdam tourist board. “It offers a solution to a problem that we do not have.”

Amsterdam, a city of about 700,000 people, welcomes 4 million tourists every year. About one quarter of them visit one of the city's 223 coffee shops. For many, kicking back with a joint has become an integral part of any visit to Amsterdam, alongside the canals, flower market and art treasures.

“We didn't come here specifically for the coffee shops, but it was definitely a factor,” said Aaron, 27, from Austin, Texas. “We've done the Rembrandts and the Van Goghs, we've done all the hot spots, but its just fun to smoke a joint.”

“Honestly you can only see so many museums and this is a nice alternative,” added his companion Elizabeth, 22, as the pair emerged from a downtown coffee shop called The Jungle. “It's not the only thing here, but it's certainly a draw.”

The coffee shops' clientele are a mixed bag. There are cannabis connoisseurs who know their Acapulco Gold from their White Widow, respectable middle-aged travelers reliving a youthful flirtation with the weed or indulging in some giggly experimentation, and boozed-up bachelor parties taking a toke before resuming their wide-eyed tour of the red-light district.

“I love my place,” said coffee shop owner Marc Jacobs. “We have people from all around the world, they drop in for a joint, to have a laugh and a nice time. Everybody gets along and we've never have any trouble.”

Jacobs opened his coffee shop, The Rookies, in 1992 among the theaters and cafes of the Liedseplein district of central Amsterdam.

Now a board member of the nationwide Cannabis Retailers Association, he warns that the new law will have a disastrous impact on a sector that, he says, directly contributes 110 million euro ($155 million) to the tax authorities in addition to attracting tourists to the city.

However, Jacobs said the economic consequences are a secondary concern. The real fear is that the new law will push the trade of cannabis back onto the streets.

“I think the Dutch politicians have forgotten why we have coffee shops in the first place. That was for health care first of all to keep the cannabis away from hard drugs and the safety on the streets,” he said.

City officials agree. Mayor Van der Laan has warned that Amsterdam does not have the resources to cope with the expected increase in street crime and health problems that could stem from the marijuana trade going underground.

“The moment it is sold illegally you'll have the danger that people will be cheated and robbed. They will start to offer hard drugs with it. We are really worried that it will lead to an increase in crime,” said Ligtvoet, from the tourist board.

The government, however, seems to be standing firm. While Amsterdam's coffee shops, legalized prostitution and thriving gay scene are viewed abroad as symbols of Dutch permissiveness, the capital's liberal attitudes are often out of step with more conservative thinking in the wider country.

Recent elections have shifted Dutch politics to the right and the government is targeting the coffee shops as part of a law and order campaign that's particularly tough on crime associated with foreigners.

“The current open-door policy of coffee shops should be terminated and that the fight against organised drugs-related crime is intensified,” said a recent statement from the Ministry of Security and Justice. “The cabinet expects that closure of coffee shops to foreign drugs tourists will ensure that they no longer travel to the Netherlands to purchase and consume cannabis. After all, many of them can use the illegal markets available in their immediate surroundings."