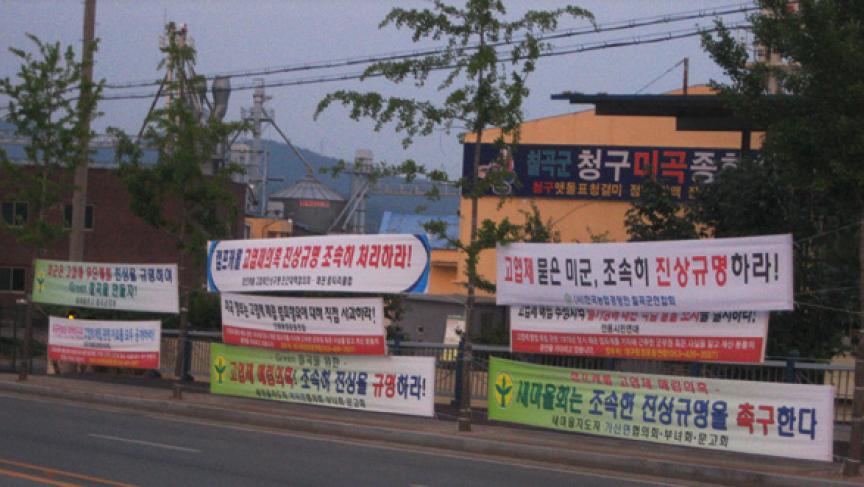 Banners outside the US base Camp Carroll urging the US to tell the truth about Agent Orange and to compensate victims. (Photo: Jason Strother)

Share
US military officials in South Korea said Thursday they've found no evidence of Agent Orange buried beneath a military base there. An American veteran had claimed that barrels of the dangerous defoliant were buried three decades ago at the base called Camp Carroll. The claim highlighted public fears in South Korea about pollution caused by US military forces stationed there. There's an old covered market in the small city Waegwan, about 135 miles south of Seoul, where the base is located. You can buy fruits and vegetables all grown on local farms. One of the market's vendors, 54-year-old Ms. Ba, helps her customers pick through the piles of watermelons, tomatoes and pears. She said the most famous fruit from the region is chamae, a type of small yellow melon. But ever since news about possible Agent Orange contamination came out in May, she said not many people are buying them. "Customers don't want to eat chamae because they know they come from here," Ba said. "Sales are about half of what they were before." But 42-year-old Seok Seong-Bong doesn't seem too worried. He was leaving the market carrying bags of fruits and vegetables. "I don't believe the farms where these are grown have been polluted, even if there is contamination on the Camp Carroll base, Seok said. "I don't think the quality of the produce here has been affected at all." Seok said he thinks the Korean media has over exaggerated the health risks posed to locals here. But the South Korean government is taking the news seriously. The Defense Ministry said it will investigate dozens of former US military facilities to check for toxic defoliants in the soil. And groundwater samples have already been taken near the DMZ, where Agent Orange was used back in the sixties. Environmental contamination caused by the United States Forces Korea, USFK, is nothing new, said activist Jung In-chul of Korea Green United. "In the past 20 years we've seen 47 cases of environmental problems near US bases," Jung said. "The most serious incident was in 2000 when they dumped formaldehyde into the Han River in Seoul." The US military's Yongsan Garrison, where that incident took place, is one of 26 American camps slated for return to South Korea by 2018. Environmentalists want those facilities handed back in their natural state and want the US to cover all the clean-up costs. But according to the US-Republic of Korea Status of Forces Agreement, or SOFA, the treaty that governs how the military operates here, the US is not obliged to do either. Activist Jung In-chul wants the SOFA re-negotiated. "SOFA only allows the US military to determine what constitutes a serious threat to human health. The South Korean government has no say and is given no estimate of what the clean-up costs of those bases will be, and for those reasons this agreement is unfair to Korea," Jung said. Scott Snyder, director of the Center for US-Korea Policy at the Asia Foundation in Washington said no status of forces agreement is perfect. But trying to re-negotiate this one over a single issue, regardless of what that issue is, would lead many other nations to push for their own alterations. And, Snyder said in the case of Korea, it's not the SOFA that is the main problem, it's the US military's own policies. "The US military has set its own global standard for what constitutes acceptable management of environmental issues and that standard today falls below standards set by Korean law," he said. What also irks some South Koreans these days is that they don't see the United States as protecting them from North Korea anymore. Shin Chang Hoon is director of International Law and Conflict Resolution at the Asian Institute in Seoul. He said Koreans are much more concerned with quality of life issues today. "I think people's interests have shifted from security to environmental welfare," he said. "So sometimes, environmental issues and welfare issues may affect political relations (with the US)." Shin added, if the US wants to keep good political relations with South Korea, Washington should make some sort of gesture to the Korean public whether or not the current investigation finds that Agent Orange was buried at the base. But outside Camp Carroll, it seems protestors have already made up their minds. Banners call on the US to tell the truth and compensate the citizens for the damage they've caused.