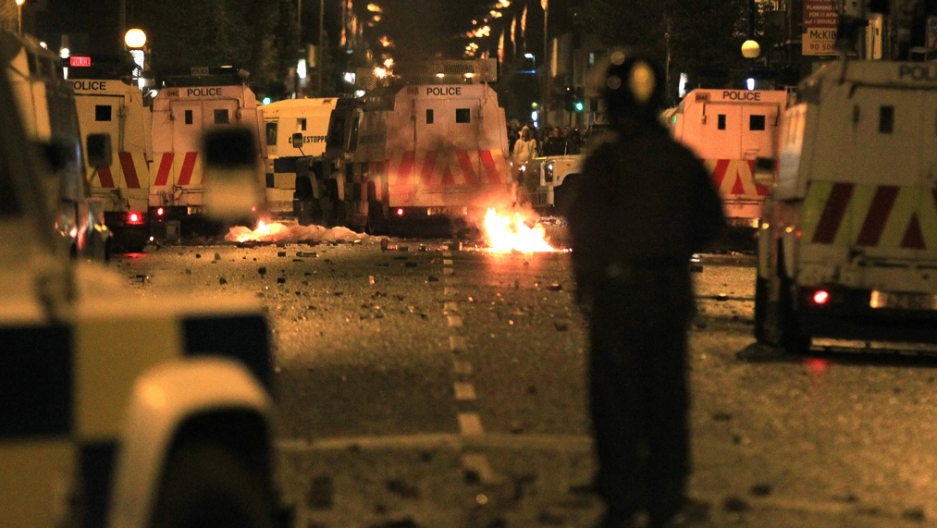 DUBLIN, Ireland — The sudden eruption of street riots in Belfast, with hundreds of masked youths fighting each other and the police with stones, gas bombs and occasional gunfire, has shocked those who thought Northern Ireland had entered a new era of peace and reconciliation.

But anyone traveling along the lower Newtownards Road in east Belfast recently could sense that something ominous was in the air in this staunchly Protestant district of Northern Ireland’s major city.

Under the peace process, the hate-filled imagery in both Catholic and Protestant areas had mostly been replaced with less-intimidating murals, under a program called “re-imagining communities.”

But in east Belfast the writing was on the wall, in every sense. The new murals were a sign of what was to come.

On Monday evening, in a coordinated action that the police said was orchestrated by the UVF, scores of masked youths attacked a small, nationalist district of some 3,500 Catholics known as the Short Strand.

They were repulsed by men and youths on the Catholic side, from which 11 revolver shots were fired, injuring two loyalists.

On the second night, the attacks resumed and there was more gunfire from both sides. A bullet from the Short Strand wounded a Press Association photographer in the leg.

Violence in this part of Belfast is nothing new, said David McKittrick, Belfast-based co-author of “Lost Lives,” a volume relating the individual stories of the more than 3,600 people killed since the Troubles erupted in Northern Ireland in the late 1960s.

“This has been a flashpoint area for two centuries, a small Catholic enclave surrounded by large swathes of Protestants and through the years it has been a sectarian battlefield.”

He points out, however, that “while this outbreak seems to have been sparked by the usual rise in tension before the July marching season, there are two other factors at work.”

One of these is a sense among loyalist paramilitary groups that they have been excluded from the peace process.

This stems from a perception that the paramilitary organization on the Catholic side during the Troubles, the Provisional Irish Republican Army, has been rewarded with seats in government — the former Derry IRA commander Martin McGuinness is deputy chief executive of the power-sharing administration — while the Protestant paramilitaries have been left out in the cold.

The majority of the Protestant population of Northern Ireland is represented in government by the Democratic Unionist Party, which has no ties to paramilitary groups.

The party’s leader, Northern Ireland Chief Executive Peter Robinson, said Wednesday, “It is deeply concerning to see this type of violence return to our streets. This type of behavior damages the local economy and unfairly mars the reputation of the community.”

Another factor behind the violence is a fear among senior members of the UVF about old criminal cases being reopened, leading to arrests and charges for sectarian murders.

This arises from an impending report of the Historical Enquiries Team, a specialist unit that is re-examining evidence from over 3,000 unsolved murders, which is expected to implicate several members of the UVF.

Already some aging loyalist terrorists who might have thought themselves safe from legal retribution have been hauled before the courts.

In April, a Belfast man, Robert Clarke, was given a 25-year prison sentence for shooting dead a Catholic businessman in 1973, an assassination typical of the UVF, which often killed Catholic civilians in retaliation for IRA murders of members of the mostly Protestant security forces.

Many analysts in Northern Ireland believe that this week’s attack on Short Strand by the UVF was a warning of what mayhem it can create if more charges from “cold cases” follow in the near future.

So far the rioting has been localized around the Short Strand. But there is a danger that Catholic youths from other parts of Belfast will be drawn into the street fighting to help the beleaguered community there.

A similar riot at the Short Strand on June 27, 1970 resulted in the first major action by the Provisional IRA of the Troubles.

Local Protestants maintain that the IRA fired on unarmed members of the loyalist Orange Order returning from a parade.

For decades, throwing stones at the interface between the two communities in east Belfast has been a common occurrence, but nothing compared to the intensity and organization of this week’s disturbances.

The big concern of local people is that the guns have come out and a death could cause a new spiral of violence.

The UVF is officially on ceasefire and the IRA has disbanded. But illegal weapons are clearly still available in Northern Ireland, where private firearms are banned.

Police said that the gunfire from the Protestant area was directed at police and the shots from Short Strand were fired by dissident republicans, a small minority of nationalists who reject the peace process and have resumed an armed campaign against the police.

The rioting plays into the hands of the dissident republicans if they can depict themselves as the defenders of the Catholic community.

This has lent added urgency to the efforts by community leaders on both sides to get a cross-community dialogue under way to prevent the situation from escalating and spreading to other parts of Belfast.

Editor's note: This story has been updated to correct a description of Belfast's murals.