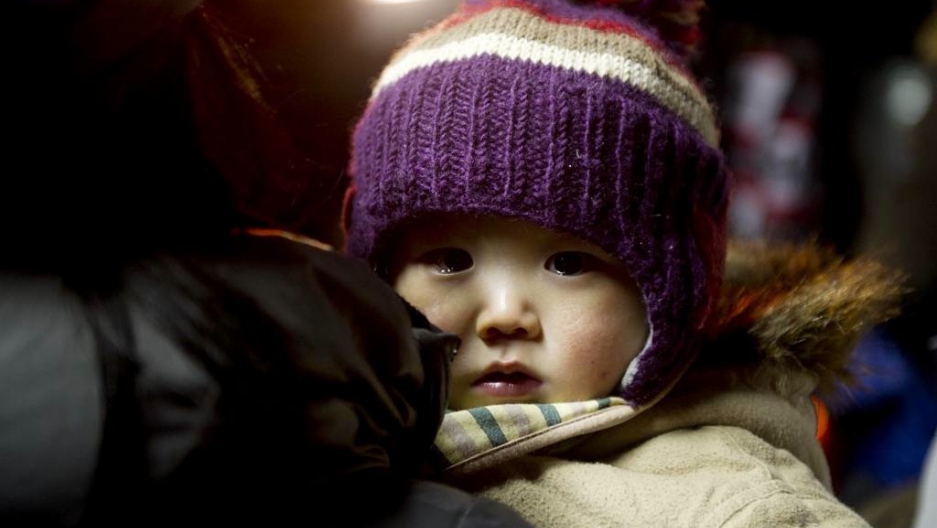 A woman carries her son as they queue to take buses provided by the Chinese embassy to evacuate people from the devastated city of Sendai, in Japan's Miyagi prefecture, following the earthquake and tsunami disasters.
Credit: Stringer
Share

OTAMA, Fukushima Prefecture, Japan — For the nuclear evacuees living in a leisure complex in the hills overlooking Otama, the arrival of three stand-up comedians offers brief respite from life post-Fukushima.

There are jokes, songs and free T-shirts. But the biggest response of the afternoon is to a dig at Japan's beleaguered prime minister, Naoto Kan. "We feel sick about the way he's handling the crisis," one of the trio says. "Goodness knows how angry you must be."

The bitterness resonates easily among the 100 or so evacuees, all former residents of towns dangerously close to the Fukushima Dai-ichi nuclear plant, which continues to leak radiation more than three months after it was struck by a tsunami.

(Another earthquake has struck in the same area that triggered March's devastating tsunami.)

Some became unemployed when evacuations were ordered, sending more than 80,000 people from their homes with no idea when, or if, they will be able to return. Several children staying at the complex are being looked after by relatives while their parents look for work elsewhere.

"We're all stuck here together and we're getting tired of it," said Asami Igari, who is hoping to find work and assisted housing in Koriyama, a nearby city.

The home she and her husband, a nuclear plant worker, shared 6 miles from the plant is uninhabitable. "Our house and land have been ruined by radiation, so it could be years before we can return," she said. "The whole situation is very scary."

Despite leaving their contaminated towns behind, the evacuees haven't escaped the shadow of radiation altogether.

Otama, located more than 35 miles from Fukushima Dai-ichi, is one of dozens of communities showing abnormally high radiation readings, prompting fears of the long-term health of their residents, particularly children.

At Oyama primary school, whose 225 children are aged 6-12, the soil now lies buried, wrapped in tarpaulin, in a trench just outside the office of the school's principal, Hiroyuki Ando.

"We were worried about high radiation levels, particularly caesium in topsoil, so we consulted scientists and the local education authorities and removed it ourselves," Ando said.

The results were dramatic. Readings in playground soil, while never a direct threat to health, dropped from 1.32 microsieverts per hour to 0.25 microsieverts, although they remain higher than the pre-disaster level of 0.04 microsieverts.

Japan's nuclear crisis has followed a now-familiar pattern of reassurance from the authorities, followed by public pressure and, in some cases, official about-face.

The government's decision, in April, to raise the upper limit of safe radiation exposure for children from 1 millisievert a year to 20 millisieverts — the same level the International Commission on Radiological Protection recommends for nuclear plant workers — sparked anger among parents, who accused officials of ignoring the potential long-term consequences for their children's health.

Weeks later, a chastened education ministry said it would aim to reduce the exposure limit for children to the original level — though it remains an "aspiration."

But the change of heart in Tokyo, and the lower readings in "decontaminated" playgrounds like those at Oyama primary school, have done little to reassure residents.

Earlier this week, a coalition of civic and environmental groups in the Fukushima area issued an emergency petition demanding the evacuation of children and pregnant women from radiation hot spots outside the exclusion zone.

"Since atmospheric radiation levels show no sign of abating, the inhabitants of heavily contaminated areas will continue to endure high radiation doses, both externally and internally," they said.

Greenpeace has also urged the evacuation of expectant mothers and children from Fukushima city, 40 miles from the power plant, where it says people are accumulating between 10 and 20 millisieverts of radiation a year through atmospheric exposure alone.

"This is highly unacceptable," said Jan Beranek, head of the organization's energy campaign. "After the accident in Chernobyl, the Soviet government decided to evacuate anyone living in a place where the annual dose was to exceed five millisieverts."

To address what Greenpeace has called an "information limbo," the city's authorities are to distribute radiation dosimeters to 34,000 children in the city in September, then analyze the data each month to assess the risks posed by cumulative radiation exposure.

Ando agrees that the authorities have not provided enough information about the long-term risks to children who, given their youth, will be more susceptible to thyroid and other cancers as they grow older.

"Most of the parents here were adamant that we remove the topsoil, even though the government keeps saying there is no risk. You don't know what effects radiation will have 10 or 20 years down the line. It's not just about safety, but about reassuring people," he said.

"It is all very well the government telling us that we're overreacting, but this is where we live. This is where our children go to school."

In rural Fukushima, an area already in the grip of depopulation, the twisted realities of the post meltdown era mean that Otama, a village of just 8,600, will see its population increase dramatically due to the influx of nuclear refugees.

More than 20 pupils at Oyama primary school are recent arrivals from the radiation-hit towns of Tomioka and Minamisoma, with around 80 more expected this summer. When all of the temporary housing units are completed, the village's population will rise by about 2,000.

Building a new life in Otama will not be easy. Agriculture, the mainstay of the local economy, is expected to suffer, with local farmers conceding that it will be all but impossible to sell this year's rice and other crops to nervous consumers.

"We want them to feel welcome, and their children to be happy at the local schools," Ando says of the evacuees. "But there is very little work here."