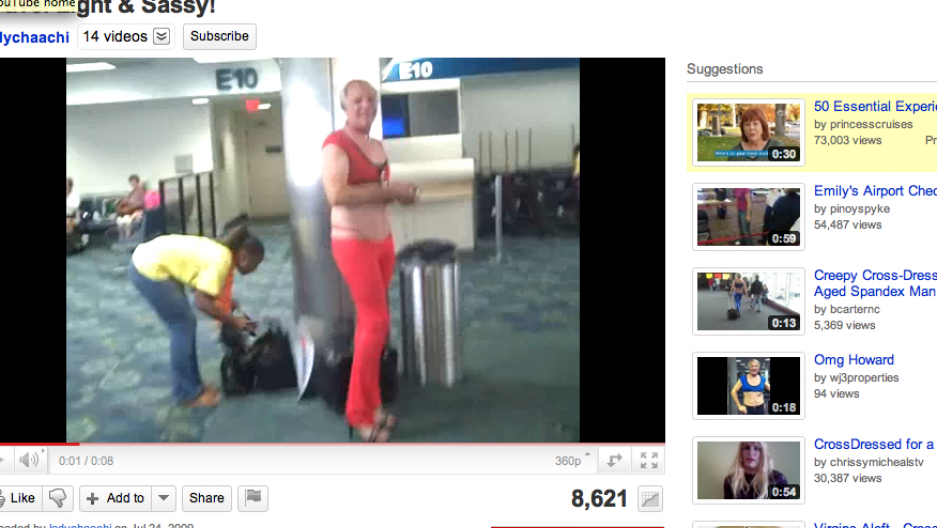 A cross-dresser who regularly boards planes dressed only in women’s underwear and heels says he does it to make business travel more fun.

"Howard" — 65-year-old Phoenix man — has been filmed and photographed preparing to board planes dressed variously in spandex tights and matching midriff top, and women’s underwear and heels.

He's even agreed to interviews, provided that his full name not be published, professing that no matter where his wardrobe takes him, he strives to be considerate to fellow passengers.

"It has never been my intent to put people in a situation where they feel uncomfortable," Howard told the San Francisco Chronicle. "I try to respect other people’s opinions. As long as my dress is not indecent from a legal perspective, and so long as the airline does not object, I have the right to wear what I wear. And others have the right to wear what they want to wear."

He told the Chronicle that, as a business consultant, he had "a lot at stake" and his identity being revealed could discredit him in his field.

"This is just something I do for fun. I don’t mean any harm," he said.

Howard first made headlines worldwide — he's called the cross-dressing business traveler in one Australian article — after fellow passenger Jill Tarlow snapped Howard’s photo before a June 9 flight from Fort Lauderdale, Florida, to Phoenix as he prepared to board wearing blue underwear, heels and black stockings.

The reaction of other passengers varies, with one YouTube video posted under the title ‘‘Creepy Cross-Dressing Middle-Aged Spandex Man."

"You look good ... let’s see it ... bam! Do it baby!" says the commentator in yet another, channeling Austin Powers.

Howard said he is happy for other passengers to take his photo, but only for personal use.