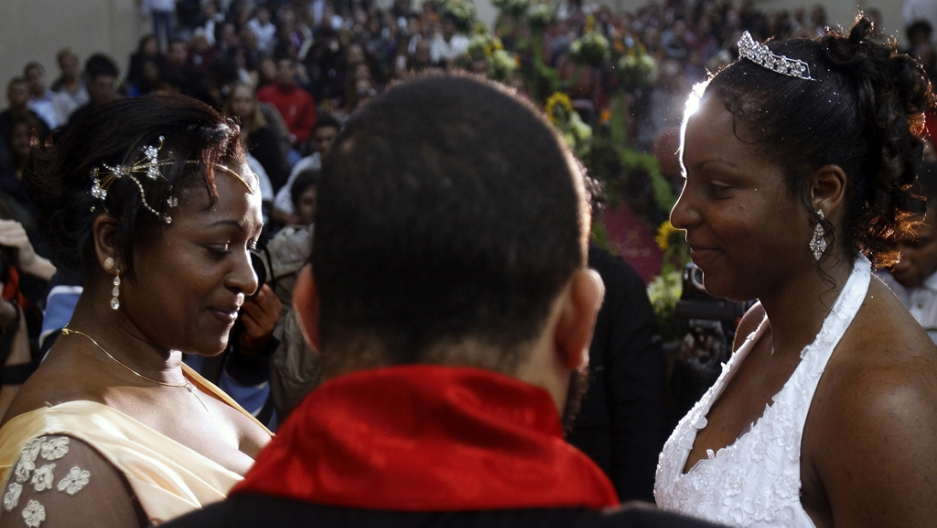 Brazilian Mikelly de Jesus, 44, and her bride Leia de Jesus, 29, as they get married during a collective gay marriage ceremony in Brazil, on June 13, 2009.
Credit: Daniel Kfouri
Share

RIO DE JANEIRO, Brazil — The judge Siro Darlan began the wedding ceremony with a Biblical passage from St. Paul, calling him the greatest writer on love. “Love is patient, love is kind. It does not envy, it does not boast, it is not proud.”

And he added: “Love does not tolerate prejudice.”

The 40 couples about to wed — in the first mass same-sex ceremony in Brazil, held in the state offices and organized by the government — applauded in the packed auditorium.

(More from GlobalPost in Brazil: Husband attacks wife with pet poodle in Brazil)

Brazil became the largest nation to legalize same-sex civil unions through a Supreme Court decision in early May.

But application of the ruling has not been consistent: A judge in the interior city of Goiania, for example, last week single-handedly annulled a same-sex union, though no one had opened a case against the couple. Though the union was restored afterward by a separate judge, the couple still traveled here for the mass ceremony above the iconic Central do Brasil train station to wed again.

“That judge [in Goiania] thinks that he is God, [but] what God has unified no man can separate,” Siro proclaimed before the men took their vows Wednesday evening.

“We were very happy. It was a dream” when they heard about the Supreme Court decision, said Gonzales, in a strappy maroon dress, silver heels and sparkling eye shadow.

Short, in a similar green prom-style dress, added that they were especially zealous to sign up for the mass ceremony in such a public event. “We went and grabbed it.”

The crowded and noisy procession was replete with live musical performances, such as by celebrity transvestite Jane di Castro, with covers of ‘80s pop star Richard Marx’s “Now and Forever” and Frank Sinatra’s “New York.” Families and witnesses alternately wore their Sunday best or nightclub digs in the small red chairs with retractable desktops.

Flavia Pinto, in a tall white turban and stiff long gown, sat in the front to witness the marriage of women she calls her spiritual “daughters,” whom she married in the Afro-Brazilian “umbanda” faith a year beforehand. “Today they came to officialize it,” the priestess said, adding: “In umbanda this is accepted. It’s fine. … We carry out marriages of love.”

Longtime gay activist Marcio Caetano noted, however, that Rio de Janeiro has traditionally been a vanguard within Brazil and that the rest of the nation has not embraced the gay community as enthusiastically.

He cited the recent decision of left-of-center President Dilma Rousseff to not distribute the so-called “Gay Kit” in public schools, which included anti-homophobia materials prepared by non-governmental organizations and the Ministry of Education.

“The case of Goiania already signals that we are not guaranteed this right” to civil unions, he added.

For cheery English teacher Arthur Freitas, that right is a practical one. He described watching one member of another gay couple pass away and the family of the deceased expelling the surviving partner from the home they had shared.

“We constructed our lives together, with our economies and our house and our business. We have to protect it,” said Freitas, who wedded his partner of 21 years. “If anything happens to me I want him to be safe.”

At the back of the crowded wedding hall, a mother, sister, cousins and grandmother had come to support a young groom in the family.

The cloudy-eyed Nair Virginia de Castro, 78, wears a rainbow gay pride button on her white blouse. She smiles and answers slowly when asked what she thinks about the same-sex unions. “It’s a good thing.”