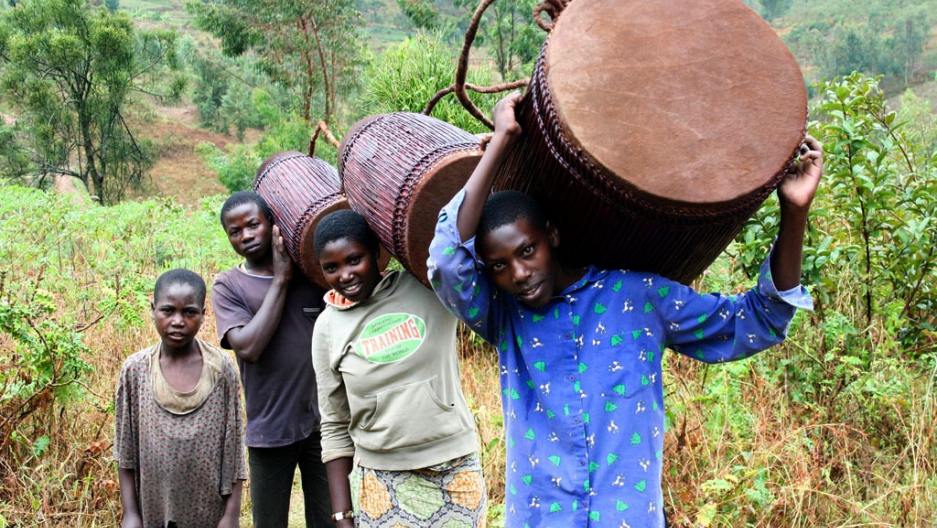 Following centuries of tradition, Denis Kagaba has crafted handmade drums from his rural home in Rwanda. At 15, his son Jean-Paul (right) is a keen apprentice.
Credit: Jon Rosen
Share

NKOMERO, Rwanda — Deep in the hills of southern Rwanda, hidden in a maze of overgrown cow paths, Denis Kagaba’s modest workshop is hardly fit for a bearer of royal tradition.

But here, miles from the nearest town, on a small farm where he grows coffee, bananas and pineapple, the 56-year-old father of six continues a trade that has been in his family for centuries. Using local products and a set of simple tools, Kagaba is one of Rwanda’s last remaining Ingoma craftsmen: the maker of drums considered sacred throughout Rwanda’s history.

“Many have abandoned this because it’s hard work,” said Kagaba, who learned the art from his father more than 40 years ago. “But for me, it’s more than a job. It’s tradition.”

Unlike most modern African states, forged as arbitrary entities by uninformed European powers, Rwanda was an authentic nation long before the colonial era. From the 15th to 19th centuries, a succession of Rwandan Kings gradually expanded the domain of their authority, conquering rival chiefdoms, absorbing new populations, and eventually controlling land that included all of present-day Rwanda and parts of neighboring Uganda and Congo. In Rwanda, the king was said to be the eye of God, a power enforced by his most sacred possession: the Kalinga, a large ceremonial drum adorned with the testicles of his vanquished enemies.

Reserved for special occasions, the Kalinga and other royal drums were crafted and looked after by Abiru, the King’s guardians of tradition, and experts in court ritual and protocol. The drums, which were also seized from enemies in battle, traveled with the King and kept the beat for the Intore — an elite group of warriors practicing dance, poetry, military arts and a sport similar to the modern-day high jump.

Kagaba is descended from a family of Abiru, who remained the King’s most trusted advisors until the monarchy was abolished under pressure from Belgian colonial administrators prior to Rwanda’s independence in 1962. The last Rwandan King, Kigeli V Ndahindurwa, has lived in exile for close to a half-century, watching from afar as his country endured one of the 20th century’s most grisly acts of violence: the slaughter of 800,000 Rwandans over 100 days in the 1994 genocide.

Today, Rwanda is a nation re-born, home to a rapidly modernizing capital and a government that sees its future in building a tech-savvy young generation. But Rwanda has not forgotten its artistic heritage. Though no longer an elite fighting force, today’s Intore are masters of Rwanda’s traditional drumming and dancing rituals, which are now performed around the world. The National Ballet, formed in 1974, remains the country’s most prestigious Intore ensemble, though with government support, new troupes are cropping up in increasing number. This is good news for Kagaba, who has seen a renewed demand for his custom-made drums.

“Business can be slow at times,” he told GlobalPost. “But it has actually picked up in the last couple of years.”

As Kagaba explains, the drum-making process begins by felling an Umuvumu tree, a species found only in Rwanda’s south, known for its particularly robust timber. Kagaba then hollows out a section of the trunk, carving it by hand so that the top is twice the diameter of the bottom. Next, he fastens the drumhead —made of cowhide, pelt facing up — with dozens of leather straps pulled taught around the drum’s body. Finally, he applies a liberal dose of cow’s blood, which keeps the straps in place and ensures the acoustics remain sharp.

It’s a physically demanding, time-consuming process, which becomes virtually impossible during heavy rains. Depending on the size, Kagaba’s drums fetch anywhere between $50 to $130 — small sums given the intensity of the work, but enough, along with money from his crops, to give a comfortable life to his wife and children.

If there is a challenge, Kagaba says, it lies in the supply of timber. Umuvumu trees, traditional symbols of protection, were once planted widely across Rwanda’s south, where they typically served as gates to family compounds. According to Rwandan mythology, the tree earned its sacred status when Ryagombe, a messenger of God, came under attack by a buffalo and was saved by the branch of an Umuvumu.

During the colonial era, as traditional beliefs waned, and Christianity took hold of much of the nation, the Umuvumu — which must be cared for meticulously —began to lose its hallowed reputation. Once plentiful, the trees are now declining in number, and are frequently cut down by residents in search of charcoal. Though he once used Umuvumu wood from his property, Kagaba now travels miles to purchase timber. One tree, which takes fifty years to reach maturity, yields approximately ten of the smallest drums or just three of the biggest.

For now, Kagaba says his supply of Umuvumu is sufficient, but he admits the continuation of his drum making tradition — which his son Jean-Paul has already embraced — will depend upon the tree’s survival.

With this in mind — or perhaps to appease a chorus of concerned visitors — Kagaba ends his workshop tour by hacking off a branch of an existing Umuvumu and planting it amid a patch of banana trees.

If cared for properly, it will one day grow to maturity and yield a set of royal drums – if the family trade survives another half century.