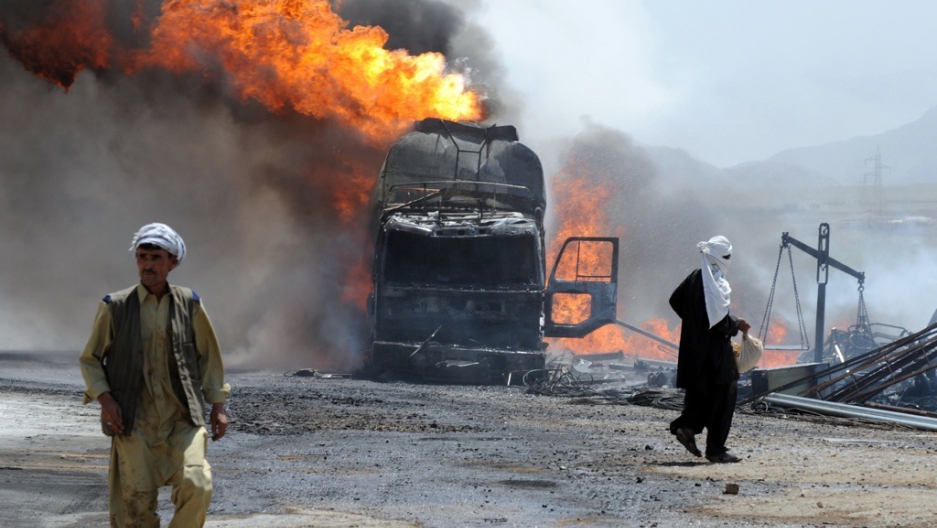 Local residents walk past a burning NATO supply truck after an attack by gunmen on the outskirts of Quetta on June 19, 2011.
Credit: Banaras Khan
Share

PESHAWAR, Pakistan — Some of the U.S. weapons bound for U.S. and Afghan troops in Afghanistan are being stolen, landing instead in the hands of those they are meant to be used against, and fueling militant groups in both Pakistan and Afghanistan, Pakistani officials say.

These weapons — which are typically snatched from Afghan troops during raids or sold by them to the Pakistani Taliban after they defect, are easily available in black markets in Pakistan's tribal regions.

Some weapons, along with other military-issue supplies, are also being seized by Taliban militants in attacks on NATO convoys passing through Pakistan on their way to resuply soldiers in Afghanistan. Although such raids have been taking place for years, the Pakistani Taliban appear to have widened the zone where they are willing to operate, attacking NATO trucks in major cities as well, including in the capital of Islamabad as recently as June 9.

An estimated one-third of the supplies bound for U.S. and NATO troops in Afghanistan travel by land from Pakistan's port city of Karachi. Pakistani intelligence officials said that, in many cases, the drivers moving the NATO containers are working with the Pakistani Taliban, which torches the containers after seizing the loaded goods.

Major General Ather Abbas, a spokesman for the Pakistan army, told GlobalPost that the U.S. weapons are being used by the Taliban against Pakistani forces in various tribal areas, including Bajaur, Mohmand and Khyber agencies, where militants have mounted a strong resistance to ongoing military operations.

The United States and Pakistan often trade accusations that one or the other is aiding militants. The United States has accused elements of Pakistan's spy agency and military of supporting and patronizing the Haqqani Network and other militant groups involved in attacks on allied troops across the border. This suspicion was at least partly confirmed on Tuesday with the arrest of Brigadier Ali Khan, a senior Pakistani army official who is accused of maintaining illicit relations with banned organizations.

“The (Pakistani) Taliban are equipped with sophisticated U.S.-made weapons, which they either procure from deserted Afghan soldiers or snatch from Afghan and U.S. troops in ambushes, and ultimately use against our forces,” Abbas said.

“This phenomenon is fueling militancy, both in Pakistan and Afghanistan. And it must be checked by the U.S. forces based in Afghanistan because it has not only been creating trouble for us, but for them as well,” he said.

Among the most prevalent U.S.-made weapons making their way into the hands of militants is the M-4 rifle, an updated version of the M-16. Besides rifles and pistols, night vision goggles, lasers, silencers, jackets and flashlights meant for U.S. troops are all available in arms markets throughout Pakistan.

The M-4 rifle typically sells for about $12,000 on the black market when it is fitted with night vision equipment, a silencer and a light, while small pistols fitted with silencers are generally available for between $800 and $900.

Although buying such weapons requires contacts that are not available to most average citizens, other U.S.-made accessories like communication devices, night vision goggles, boots and flak jackets can all be easily bought in the open markets of Quetta and Peshawar, the two major supply routes to southern and northeastern Afghanistan.

The high rate of desertion among Afghan forces being trained by the United States to assume security operations as the United States and NATO prepare to draw down troops in the country has been well documented. By the Pentagon's own numbers, somewhere between 30 and 60 percent of Afghan soldiers desert the army during or after their training.

Some of those soldiers have found that selling the weapons issued to them by the United States is an easy way to make some extra money on their way out.

“The desertion rate (in the Afghan National Army) is hovering around 25 to 30 percent, which is alarming. This is a general trend that when they need money, they sell their weapons to either arms smugglers or directly to the Taliban, blaming the loss of the weapon on ambushes,” he said.

In Pakistan's tribal areas, he said, the weapons are reaching a thriving market.

Yusufzau said the availability of U.S. weapons in Pakistan have increased the capability of Taliban fighters here, where they have in the past typically relied on Chinese and Russian-made arms.

“Many U.S. soldiers have been killed by those weapons, which were actually meant to be used by them against their enemy,” he added.

Pakistani arms dealers who buy and sell U.S. weapons told GlobalPost that not only local Taliban militants, but also anti-Taliban militias purchase the weapons from them.

“We buy these weapons through Afghan and Pakistani middle-men,” an arms dealer from the town of Darra Adamkhel in Pakistan’s western frontier, told GlobalPost, asking not to be named. Darra Adamkhel, located 20 miles west of Peshawar, is known as a hub of locally-made and smuggled arms.

“We have to place an order (to middlemen) at least three months ahead of time because the shipments take so long to reach the local markets,” he said.