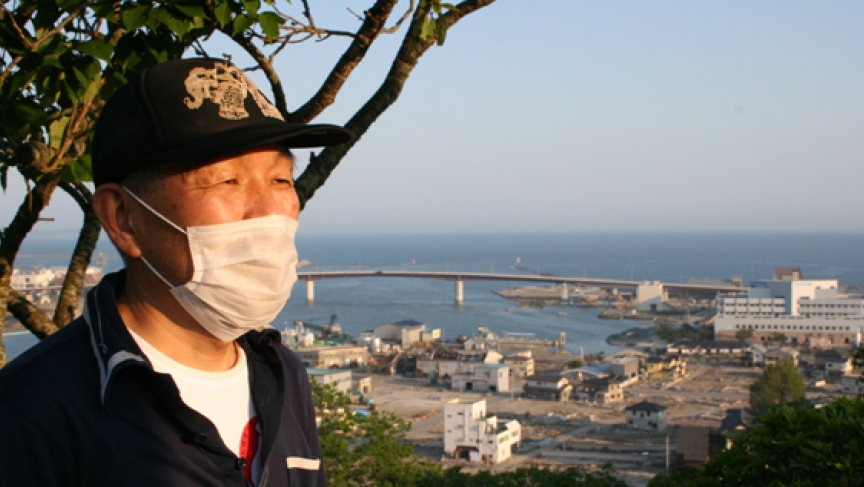 Kiyotaka Sase stands near the hard hit port of Ishinomaki in northeast Japan after the catastrophic 9.0 magnitude earthquake and tsunami.

When the tsunami destroyed Kiyotaka Sase's home in the Japanese city of Ishinomaki on March 11, 2011, he and his family moved into a makeshift evacuation center inside a local community hall. Sase soon found himself in the role of de facto "mayor" of the second floor of the shelter.

It's his responsibility to keep things running smoothly for the 40 people who live on his floor.

At a daily meeting with other shelter leaders, Sase receives a stack of new hand towels to distribute to the evacuees. Most of the evacuees are elderly, and they suffer from a variety of ailments, including high blood pressure and pneumonia.

A leader from another floor suggests a Karaoke night for the evacuation center, and Sase is all for it. For a minute, the leaders forget their circumstances and laugh as they plan the entertainment.

"There are 40 people living here with different ideas and opinions about things, but they are all in the same situation. I make decisions based on what's right for the group and they understand my decisions," said the 61-year-old Sase, a soft-spoken man who used to work for a construction company.

On the second floor, evacuees sleep side-by-side in cramped conditions. Cardboard boxes and rows of blankets delineate one family's living space from another. Sase and his wife occupy a small tatami mat near the stage of the community center. In their living space, shoes and work boots are neatly organized in front of small boxes containing the only belongings they could salvage.

"After the tsunami, few personal items were left, but my family is all right so I don't have a sense of loss," Sase said. "Now we're trying to rebuild, so we don't feel hopeless."

Sase sorts through papers on his floor mat, now his workspace. He has to keep a regular count of who is still living at the shelter, since evacuees have started moving into temporary housing units.

Three months after the tsunami, evacuees in the community center face new problems. There's the heat and mosquitoes, and people are exhausted. Sase tries to make things as normal as possible for them.

He recently organized a group trip to a nearby hot spring. The second floor evacuees enjoyed a traditional Japanese bath for the first time in months.

Fumiko Hatayama and her husband live on a tatami mat adjacent to Sase and his wife. Hatayama said she didn't know Sase before the disaster, but now they've become friends, exchanging gifts and sharing items.

Inside the center, people read the newspaper, watch television, and knit. Sase distributes the towels he has just received from city staff. In addition to his duties at the center, Sase spends several hours a day clearing up mud and debris in and around his tsunami-damaged house. Through it all, he remains calm.

"I don't feel so much stress because I try not to pressure myself too much. If I push myself too hard, I will have a breakdown," he said.

Tomorrow, he will continue his routine of cleaning and making sure the second floor residents have everything they need.