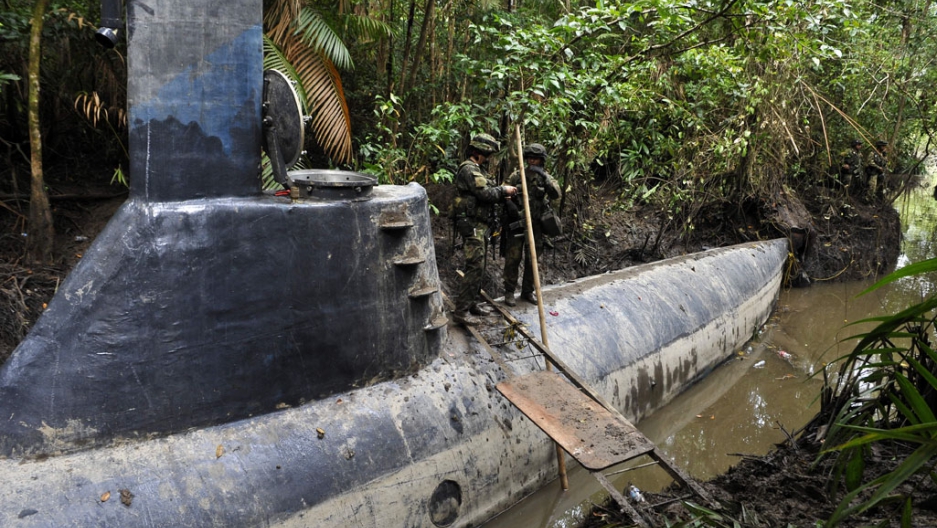 Anti-narcotics officials have warned that drug cartels operating in West Africa may be using submarines like this one, shown here being guarded by Colombian soldiers after its capture earlier this year, to smuggle cocaine from South American to Europe via West Africa.
Credit: Luis Robayo
Share

Drug traffickers are turning to submarines and other methods to avoid detection as they ship ever-greater quantities of cocaine via West Africa from the production fields of South America to the markets of Europe.

"We are not talking about military vessels here, but rather smaller ones which can be bought freely on the international market by anybody who has a couple of million dollars to spare,” said Alexandre Schmidt, regional head of the UN Office on Drugs and Crime (UNODC).

He was speaking during a drugs summit dubbed the West Africa Coast Initiative held in Senegal this week.

GlobalPost has previously reported on the use of drugs subs in South America but this is the first time officials have suggested they are being used in Africa.

According to UNODC figures, based on seizures, 35 tons of cocaine were transited through West Africa in 2009, down from 47 tons the previous year. But Schmidt warned that the apparent fall in volumes could be down to the cartels’ improved capacity for hiding their activities.

It is estimated that the value of the trade through West Africa was now $800 million a year and rising.

Schmidt warned that drugs cartels were threatening to turn West Africa into another Mexico, a country that has become a byword for drug-related violence. “What we are seeing in West Africa is like what we saw in Mexico,” he said.

West Africa is a largely poor part of the world and the value of the illegal drugs moving through the region dwarfs some national economies.

He added that cases of local cocaine use were also on the rise and it was becoming, “a huge issue for public health” in West Africa.