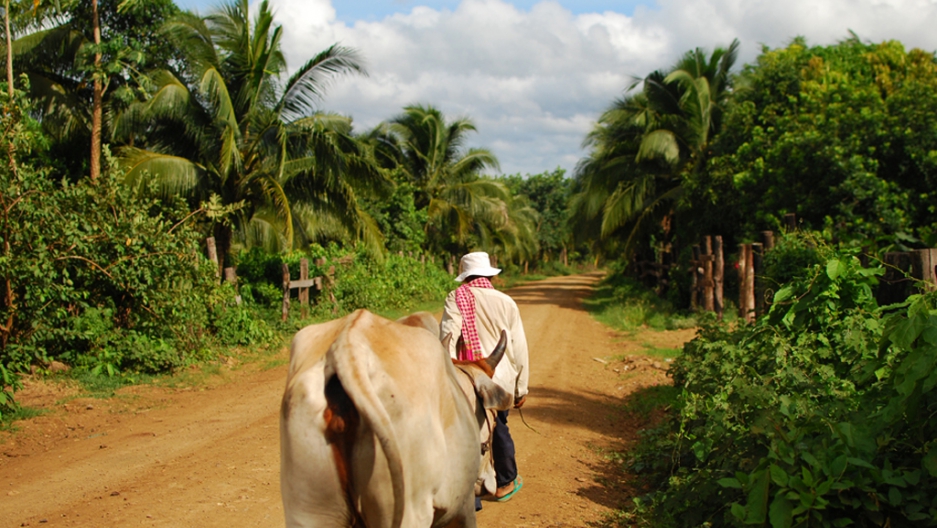 More than three decades since the regime’s fall, former KR foreign minister Ieng Sary, head of state Khieu Samphan and minister of social affairs Ieng Thirith, along with “Brother No. 2” Nuon Chea, are being tried on charges of genocide, war crimes and crimes against humanity for their role in the 1975-79 regime, which led to the death of an estimated 1.7 million Cambodians.

Coming on the heels of last year’s conviction of Kaing Guek Iev (alias Duch) for his role in the deaths of up to 16,000 people at Phnom Penh’s notorious S-21 prison, the trial holds out the promise of justice long delayed.

But hundreds of miles away in Ta Sanh Cheung, a small village along the Thai border, the trials have proven a tough sell. The hamlet lies in Samlot district in Cambodia’s west, a former stronghold of the KR movement. Residents here, many of them former communist fighters, say they are worried that the U.N.-backed tribunal will soon start to cast a wider net.

Tith Ron, a 59-year-old former KR soldier who joined the movement in the 1970s at the age of 19, defended the regime’s actions, and criticized instead the American carpet bombing of Cambodia in the late 1960s and early 1970s.

“The Americans killed more Cambodian people more then Pol Pot did,” he alleged, referring to the regime’s “Brother No. 1,” who died on the Thai border in 1998. The U.S. bombing of Cambodia devastated large swathes of the countryside and is estimated to have killed hundreds of thousands. It is estimated that more than 2 million tons of munitions were used during the campaign.

“If they want to sentence us they should also bring the Americans, because they dropped 7 million tons of B-52 [munitions] onto our heads. We were Cambodians saving Cambodians — how can they sentence us?” Tith asked.

Locals were particularly worried after recent radio broadcasts named an elderly local resident as a war crimes suspect in the tribunal’s potential third case. The man named was Meas Mut, the former commander of the KR navy, who defected to the government in 1999 in return for a cushy military post and a peaceful retirement in Ta Sanh Cheung.

Along with Sou Met, the ex-head of the KR air force, leaked court documents accuse him of the torture, killing and the forced labor of tens of thousands of people under the regime. A 2001 paper by historian Stephen Heder and legal expert Brian Tittemore said the pair played a direct role in the arrest and transfer of purged cadres to S-21 prison, where many were subsequently tortured and killed.

Meas Mut’s home stands at a quiet end of Ta Sanh Cheung village, a three-story wooden structure topped with satellite dishes. On a recent Saturday, he was asleep in a hammock strung up over a wooden platform outside his home, his mouth hanging open and one leg dangling over the side. A book of Buddhist parables lay on a nearby chair, a slip of paper marking the page. Discarded skins of the rambutan fruit lay in a pile on the planks below.

Since his KR days, Meas Mut — now a hunched man with thinning, ash-grey hair — has reinvented himself as something of a Buddhist patriarch, bankrolling the construction of a new pagoda in the village and showering local villagers with sagely aphorisms. (“If you give someone happiness other people will give you happiness back,” he said). It is a strange — maybe cynical — turn for a senior member of a regime that banned religion and put tens of thousands of Buddhist monks to work in massive labor camps.

However, Meas Mut flatly denied any involvement in mass atrocities, saying his responsibility was to protect the country’s coast from foreign invasion. “I was a lower officer who was willing to protect Cambodia’s independence and neutrality, and prevent Cambodia from being controlled by foreigners. I was not a Khmer Rouge leader,” Meas Mut said, fashioning home-grown tobacco into a stubby facsimile of a cigarette.

“If I did bad I couldn’t sleep here in a hammock. Somebody might throw a stone at me or sometime might take a knife and kill me. But I am living in safety.” Despite being banned by the KR, he added, Buddhism continued to live on “in his mind” under the regime.

Locals described the accused war criminal as a “good Buddhist” and a patriot who pedals advice about everything from farming and business to spiritual matters. Another former KR soldier, Toch Pha, 54, said villagers were angered by the accusations against him. He said, “If they come to arrest him we will not allow them to take him out of the village.”

But whatever the evidence against him, Meas Mut will probably never see the inside of a courtroom. In recent months, the tribunal — known officially as the Extraordinary Courts in the Chambers of Cambodia (ECCC) — has been plagued by suspicions, internal rifts and a flurry of resignations over the issue of whether to pursue the case against Meas Mut and Sou Met.

Critics have accused judges of moving to quash the case, known as Case 003, which has long been opposed by Cambodian Prime Minister Hun Sen, who last year told visiting U.N. Secretary General Ban Ki-Moon that indictments beyond the current case were “not allowed.” Observers say Cambodian judges on the hybrid court have parroted Hun Sen’s line, calling into question the court’s independence.

The issue came to a head in April when the ECCC’s two co-investigating judges — You Bunleng of Cambodia and Siegfried Blunk of Germany — announced the hasty completion of their investigation into Case 003. Critics say the judges conducted a perfunctory probe as a prelude to burying the case.

The tribunal’s credibility continues to ebb. Four Western legal staff from the investigating judges’ office have reportedly resigned over the handing of Case 003, with one of them describing the atmosphere in the office as “toxic.” There have also been calls for an official U.N. investigation into political interference at the court.

Though Geneva has rejected the call, asserting the ECCC’s continued independence, observers say the court’s credibility is on the line.

“It could be incredibly significant,” Anne Heindel, a legal adviser for the Documentation Center of Cambodia, which researches Khmer Rouge history, said of the Case 003 controversy. “If the court is seen as not fulfilling its procedure — as not adhering to the rules — then it will taint the entire process, including Case 001 and Case 002. There’s no way you can separate Case 003 out from what’s come before.”

While Hun Sen may squash the possibility of further trials, Theary Seng, who blames Meas Mut for the death of her own parents during the Pol Pot regime, said such an outcome would compromise the current case and deepen the cynicism of ordinary Cambodians.

“It’s not surprising he should deny his role, but he can’t deny the weight of evidence. He can’t deny the testimonies that run into the tens of thousands,” she said of Meas Mut. “There’s no magic number as to how many should be prosecuted and should be indicted. But the current five are not sufficient for the crimes that took the lives of 1.7 million Cambodians.”