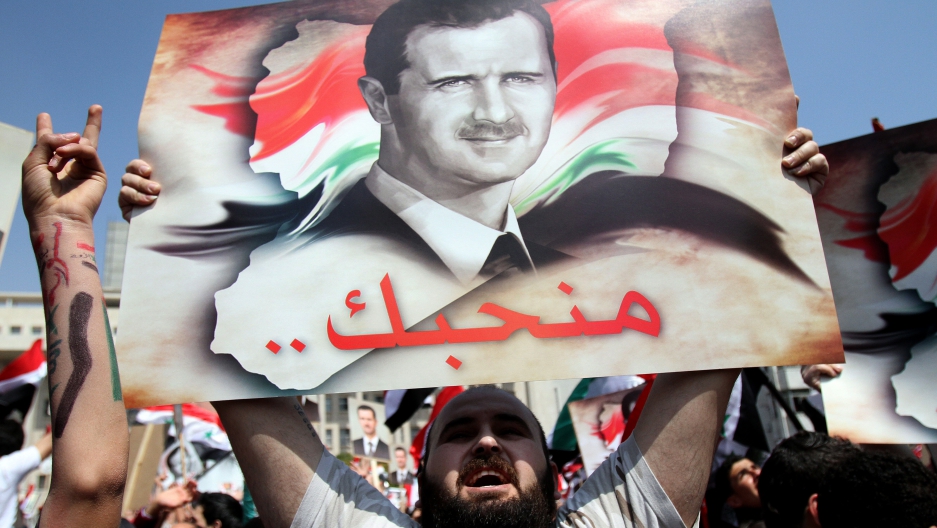 Syrians chant slogans as they rally to show their support for President Bashar al-Assad (portrait), who is facing unprecedented domestic pressure amid a wave of dissent, in Damascus on March 29, 2011.
Credit: Louai Beshara
Share

DAMASCUS, Syria — Following Syrian President Bashar al-Assad’s speech, his third attempt at quelling protests since they began in March, Syrians in cities across the country poured into the streets to hold defiant rallies.

Responses to the speech, which was dominated by vague and noncommittal language, varied between disappointment and outright anger.

Assad attempted to appease protesters by saying that he might call for a new constitution that would allow for parties other than the ruling Baath to win elections. But he stopped short of saying that he would in fact do so. He also failed to commit to halting all violence against civilians — a necessary measure, activists said, before a political dialogue can begin between the regime and its opponents.

Assad lauded a political dialogue committee, while simultaneously undercutting its authority, saying: “The committee does not hold dialogue, it presides over dialogue.”

The actual dialogue will begin “in a month or two,” he added, admitting there “are many challenges” to implementing reforms in the short-term.

Previous reform measures have also lacked strength. For example, a judicial panel tasked with prosecuting officials who oversaw violence against civilians in Deraa, where the protest movement first began, placed travel bans on two local officials but lacked the power to arrest them. Emergency law has been lifted and a sweeping amnesty issued, to little tangible effect.

Assad continued to assert that there was a conspiracy against Syria, but moved quickly past this point, which had consumed his previous two speeches. Although he expressed regret over civilian deaths — the regime has killed at least 1,400 protesters since demonstrations began, according to human rights groups — and said the government was working to implement reforms, he asserted: “We have to distinguish between [protesters] and saboteurs. The saboteurs are a small group that tried to exploit the kind majority of the Syrian people.”

“He kept talking about what is happening in the country. We already know what’s happening — we want him to tell us what he plans to do now,” lamented a graduate of English literature from Damascus University, where the president spoke.

But Syrians in Damascus said Assad’s commitments were “not enough” to quell the opposition.

“This is what he should’ve said three months ago,” said a Syrian journalist in Damascus. “Now, it’s too late.”

After the speech, defiant rallies formed in cities throughout the country, including Homs, Hama, Lattakia and in several Damascus suburbs. Dozens of students who protested on the campus of Aleppo University were arrested.

In the Sleibeh and Raml al-Filistini districts of the coastal city of Lattakia, protesters chanted “liar, liar,” Al Jazeera reported.

“People were still hoping he would say something meaningful that would result in tanks and troops leaving the streets. They were disappointed and started going out as soon as Assad finished talking,” one activist in the city told the news agency.

Demonstrations also took place in the eastern city of Albu Kamal on the border with Iraq, in the southern city of Deraa and in other towns in the Hauran plain.

World leaders also expressed their discontent toward the underwhelming speech. In the coming days, the United Nations is expected to issue a resolution condemning the ongoing violence in Syria, although Russia has said it would veto such a move.

EU High Representative Catherine Ashton said the speech was disappointing and called on Assad “to launch a credible, genuine and inclusive dialogue.” Turkish President Abdullah Gul said the speech is “not enough” and that the president should implement a multi-party system. Turkey has also called for the ouster of Assad’s brother Maher as head of the feared Republican Guard and Fourth Battalion, which is blamed for much of the violence.

The same day as Assad’s speech, U.S. Ambassador to Damascus Robert Ford and other diplomats went on a trip to Jisr al-Shughour that was organized by the Syrian regime. They were shown a mass grave that the officials said was used to bury soldiers killed by armed civilians.

At least 10,000 citizens from Jisr al-Shughour and surrounding towns have fled to Turkey in recent weeks, describing a violent military-led crackdown on civilians. In his speech, Assad characterized the violence in the town as civilian-led.

On Assad's blaming “saboteurs” for the unrest, a state department spokeswoman, Victoria Nuland, said: “We're just not buying it.”

While protesters and politicians reacted with anger to Assad’s speech, middle-class Syrians in central Damascus had a more muted response, saying they had lowered expectations after the first two speeches.

“It didn’t speak to the core of the problems. He’s just responding to the media like a student — a bad student,” said a Syrian journalist in Damascus, noting that Assad tempered the smiling, jovial nature he had put forth during the first speech because it was so widely ridiculed.

At the end of the speech, in a Syrian dialect, Assad said: “Syria is fine.”

The journalist in Damascus asked the president, rhetorically: “Are you sure?”

This story was written by a GlobalPost reporter in Damascus whose name has been withheld for security reasons.