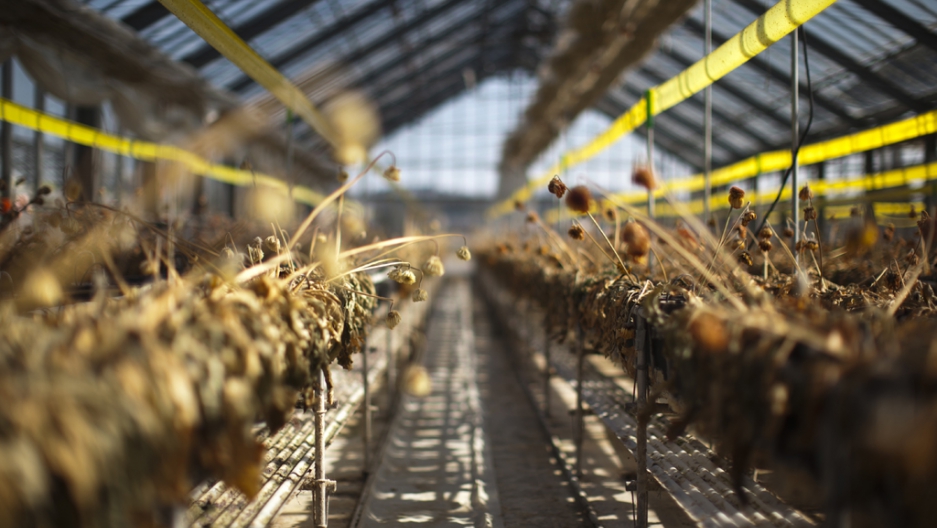 FUKUSHIMA, Japan — Cities in Fukushima prefecture struggle to cope with the stigma of becoming as synonymous with nuclear crisis as Chernobyl.

Even areas that have lower radiation readings than many of the world’s major cities, are finding everything from their goods to their tourist spots — and even their people — shunned.

“I was in Tokyo after the disaster, staying with relatives; there was a group on the train laughing and saying that people from Fukushima should be made to wear signs identifying them,” said Yuki Sato, living with her son at the Big Palette Fukushima sports center in Koriyama City.

“I couldn't believe that Japanese people would say something like that, it's just discrimination. And in Tokyo too, which got all the electricity from Fukushima — though they'd probably never thought about that.”

Sato worked for a TEPCO subcontractor at the Fukushima Dai-ni plant, a few miles along the coast from the crisis-hit Dai-ichi facility, which is run by TEPCO. Both her former workplace and home Minami Soma are now within the compulsory evacuation zone and she is waiting to be allocated a temporary housing unit in Koriyama.

Meanwhile, her husband — who also lost his job due to the nuclear accident — is working in Miyagi prefecture, building temporary houses for those whose homes were swept away by the tsunami.

Before the disaster, Sato was planning to have another child, now she's not sure if it's safe.

“I asked the health visitors at the evacuation center what the risks were from the radiation,” Sato said. “They told me it 'should be OK'. What kind of answer is 'should be' when you're talking about having a baby?”

Koriyama lies 38 miles west of the Fukushima Dai-ichi plant. Over 28,000 buildings, 2,472 stretches of road and 54 bridges in the city suffered damage from the March 11 earthquake and aftershocks, but that was only the beginning of its problems. Almost every aspect of its citizens' lives has been affected by the nuclear disaster.

“Radiation above the recommended safe levels were recorded at city schools, so we decided to remove the top layer of soil from the playgrounds,” explained a city official who asked to remain anonymous.

“There were no national guidelines for this kind of situation, so we took it upon ourselves to do it. Since then, other cities have followed suit,” said the official, pointing to a chart showing reduced readings at all the schools — though some still above the stipulated safe level for children.

Fukushima rice was considered one of the best varieties in Japan until the nuclear crisis struck; now many buyers won't even touch the crops that were harvested before the March disaster.

The sale of foodstuffs including tomatoes, cucumbers and milk from the Koriyama area was halted by the government when they were found to be contaminated with radiation.

“The ban was lifted on June 1 when the radiation levels had fallen to within the legal limits, but the farmers are finding it hard to sell anything now, even after the prices have dropped to the point where they can't make any money,” said Yoshio Matsui, head of Koriyama City's agriculture department.

The city is well-connected with highways and bullet-train lines, and was a popular location for regional offices and business meetings. Now there is concern whether its industries can survive.

“It started as soon as the news broke of the Fukushima accident: companies in Tokyo were trying to return goods that had been delivered before the disaster,” said Fumio Honda, head of the city's industry department. “After a battle they agreed to keep them, and now all goods from the city have to be screened for radiation.”

“All the big companies are saying publicly that they won't abandon Koriyama, but we're hearing rumors that many of them are looking at relocating their offices out of Fukushima,” said Honda.

Ironically, Koriyama has the biggest wind farm generating system in Japan, with 33 turbines on one mountain top near the city. And like the rest of the blighted region, it got no electricity from the Fukushima nuclear plants, all of which was sent south to the power-hungry Tokyo megalopolis.

A further 25 miles west of Koriyama lies the sleepy historical city of Aizu-Wakamatsu. Over 62 miles from the Fukushima Dai-ichi plant, and sheltered by a mountain range, radiation levels are lower than the average recorded in Tokyo. And yet it too cannot escape the Fukushima name, the first line of its address when written in Japanese.

“Look, the radiation readings here are lower than they are in Tokyo,” said Ichiro Kanke, mayor of Aizu-Wakamatsu, pointing to a Geiger counter on his desk that fluctuated between 0.03 and 0.06 microsiverts an hour as he spoke.

“Because of the castle and history in the city, we have a lot of school trips come here. But this year 80 to 90 percent have canceled, and most of the regular tour groups too,” said Kanke.

“The whole of Japan is suffering because of scare stories in the foreign media, but Fukushima is facing discrimination within Japan,” said Kanke.

The mayor has posted videos on YouTube in Japanese and English explaining that radiation is not a problem and that its air, water and food are safe.

As well as trying to attract tourists back to Aizu-Wakamatsu, the mayor has his hands full dealing with another kind of fallout from Fukushima: nearly 5,000 people have been evacuated, including almost the entire town of Okuma.

“We are getting schools and housing ready for them. Of course we're getting money from the government and TEPCO, but we don't know for how long and whether it will be enough,” said Kanke.

“We want to make sure they can use their skills and find proper work to lead normal lives, and to create a good environment for the children – the future of Fukushima prefecture. This is our project now.”