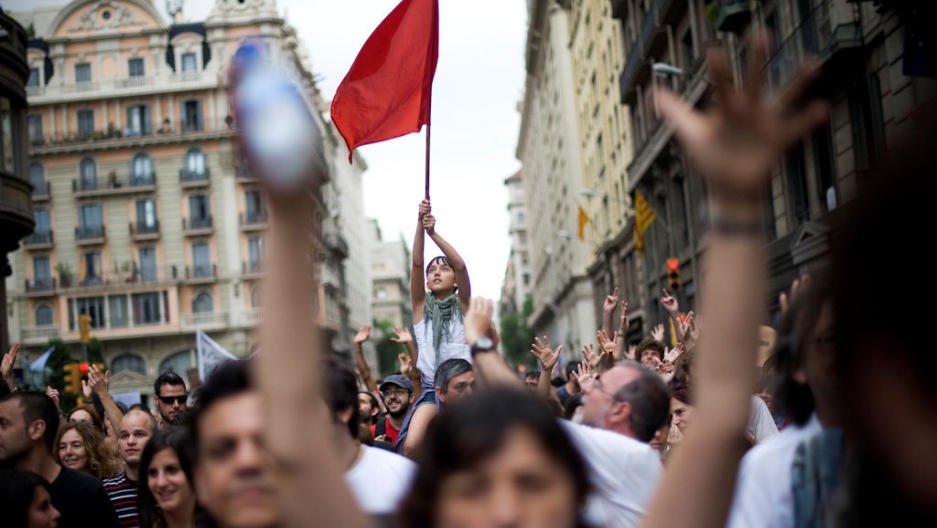 Demonstrators shout slogans during a protest against the euro zone leaders' agreed 'Pact For The Euro' on June 19, 2011 in Barcelona, Spain. Thousands across Spain protested how the country's economic crisis is being handled.
Credit: David Ramos
Share

BERLIN, Germany — “We’re playing with fire” is never a reassuring phrase, particularly not when it relates to both Athens street protesters and global investors.

Nonetheless, Euro Group President Jean-Claude Juncker used the metaphor over the weekend to describe Europe’s internal battle over how to keep Greece from going bankrupt.

It summed up the disagreements that have plagued Europe’s response to its worst post-war economic crisis. With Greece once again struggling to pay its bills, Europe’s handling of the debt crisis among its peripheral members has been exposed as weak, muddled and uncoordinated, experts say. The consequences could be catastrophic not just for the continent but for the global economy.

“The consensus among people at the IMF and in Washington is that the Europeans have failed to move as massively as you need to in the face of a crisis of this nature,” said Bruce Stokes, senior transatlantic fellow at the German Marshall Fund of the United States. “The United States created TARP (the Troubled Asset Relief Program) and closed down banks even though it was expensive and politically controversial. They moved fast with a lot of money. The European practice to date has been a day late and a euro short.”

Juncker’s inflammatory metaphor was aimed at German Chancellor Angela Merkel, who insists that private investors such as banks and insurance funds, and not just taxpayers, should bear some of the brunt of the next Greek bailout (and be certain: there will be another one).

In a prime example of the kind of disagreement that has stymied coordinated action, the power duo of France and Germany has been fighting over this type of debt restructuring.

Merkel faces domestic political pressure from German taxpayers who see themselves as paying for lazy, profligate Mediterraneans. French banks, on the other hand, are heavily exposed to Greek debt and would therefore be hurt by Merkel’s proposal (though so would German banks). Others, not least Juncker, fear that forcing private creditors to contribute to the second Greek bailout could be interpreted by ratings agencies as a default by Greece.

There are plenty of financial commentators now arguing that some form of Greek default is inevitable, short of its euro zone neighbors bailing it out periodically for a generation. A controlled default, these people argue, is therefore the best way to manage the problem, painful though it would be for many investors.

But the impact of a default remains perilously uncertain. Those who oppose letting Greece default argue that banks around the world, notably in France and Germany, that are exposed to Greek debt would lose capital, call in loans and stop lending. Capital markets would seize up. It could be another Lehman Brothers.

“No one can predict with any degree of safety how the markets will react to any state of default from a member of the euro zone,” said Thomas Klau, head of the Paris office of the European Council on Foreign Relations. “The optimistic scenario is that the situation remains manageable. But it is equally possible … that we have an absolutely catastrophic contagion not just in Europe but within the global financial markets and the global financial industry.

“It is reckless and foolish to take decisions at this stage based on the assumption that the benign scenario will emerge.”

On Friday, Merkel partially backed down. After a meeting in Berlin, she and French President Nicolas Sarkozy jointly announced a compromise under which banks and other institutions owning Greek bonds would voluntarily accept some of the burden by extending the terms of their bonds or buying new, repackaged bonds.

It is the kind of half-measure that has marked the European response from the get-go, said Stokes. The bigger issue beyond the eventual shape of the second Greek bailout is that European leaders keep buying themselves more time without addressing the deeper and tougher problems.

“It does seem to me that this voluntary private rollover is another attempt to get past this crisis, kick the ball down the road a bit and buy some time," Stokes said. "But buying time only makes sense as a strategy if you then make use of the time you’ve bought.”

So what should Europe’s politicians be doing? Stokes says the banking system needs to be restructured — as TARP restructured U.S. banks — so that a Greek default simply wouldn’t have such a catastrophic effect. Right now, many European banks are highly leveraged — they are lending out too much money as a ratio of the capital they hold. Making sure they have more capital means they could handle the shock of a Greek bankruptcy and the contagion wouldn’t spread.

“You don’t nickel and dime it," Stokes explained. "You close a couple of banks to scare the bejesus out of them. Then the banks say, ‘These guys are serious.’ Then with an awful lot of money and political capital, you recapitalize and restructure the banks so that if Greece defaults, your banks can weather it.”

As the crisis deepens, individual European leaders have taken flak, especially Merkel. But a deeper issue than leadership failure is the fact that Europe’s financial integration is not matched by the integration of its economic and fiscal policy, said Klau.

There is no treasury, no finance ministry, no central authority that can wield a stick and compel member states in a crisis. The Euro Group began as an informal meeting of finance ministers of euro zone countries, but was formalized by the EU's 2009 Lisbon Treaty. It is independent from the European Central Bank, a European Union institution responsible for price stability within the community.

“Imagine for a second that the aftermath of Lehman Brothers in the U.S. was addressed not by the federal government, because there was no such thing, but by representatives of the 50 states," Klau said. "It would have been chaos, mayhem and disaster.”

In Europe, the result has been “confusion, weakness and fudging,” he said. The political fragmentation means there are endless debates across the continent as leaders try, and generally fail, to build a consensus, all the while destabilizing markets with their uncertainty and conflicting messages.

Until any of the above is tackled, European leaders may just have to keep kicking the ball down the road.