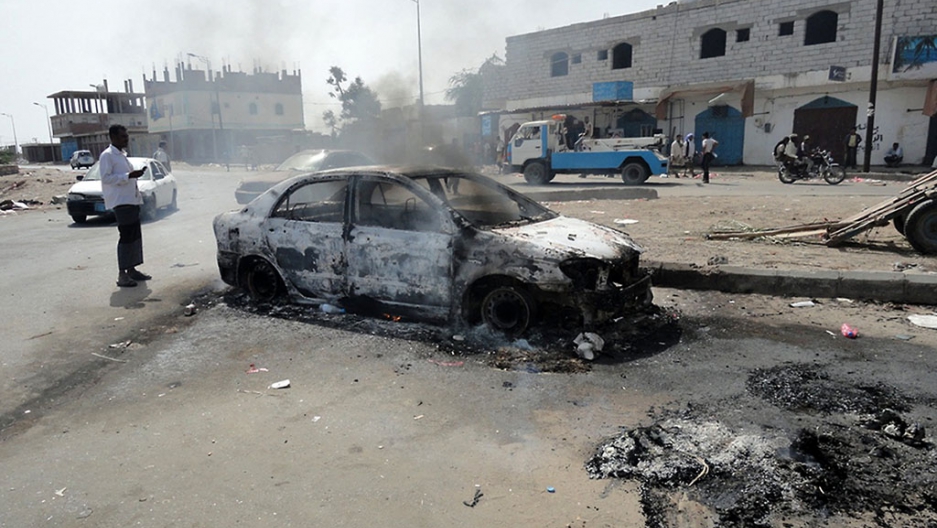 A man inspects damages in the southern Yemeni province of Abyan on May 4, 2011 following clashes between security forces and gunmen.
Credit: Stringer
Share

SANAA, Yemen — New clashes between government forces and militants in southern Yemen come amid news that the U.S. intends to increase its air strikes in the region.

On Sunday, at least 12 militants and four soldiers were reported killed in two clashes near Zinjibar, the capital of the southern province of Abyan.

Zinjibar was reported to have been seized by militants last month, just as Yemeni counterterrorism forces were withdrawn from the area.

Some say the militants, thought to be linked to Al Qaeda, are taking advantage of the strife between President Ali Abdullah Saleh's government and its opponents in order to seize territory.

Others argue that Saleh handed Zinjibar over to militants in order to reinforce his threat that an end to his three-decade rule would amount to a win for Al Qaeda.

Either way, Zinjibar is a war zone.

"Bodies have been left in the streets for weeks, rotting, and dogs have begun eating the corpses,” said Col. Qasim Muhammad Hadi speaking from Aden, a Yemeni military commander and head of the Zinjibar security forces.

Meanwhile, news has spread of U.S. plans to increase air strikes against suspected militants in Abyan, an effort that many say will have a disastrous effect on the civilian population and do little to stabilize the region.

Analysts say strikes in the past have claimed a large number of civilian lives.

“Drones are categorically a bad idea and in the past have hurt civilians in a disproportionate way. It is not fair to the people of Abyan for them to be exposed to this kind of additional hardship,” he added.

Col. Hadi stressed that random drone strikes would not force armed militants out of the area.

“These drone strikes are worthless. We need ground forces in the area to retake the cities, Yemeni ground forces,” he said.

Revelations of further planned drone strikes in Abyan came after Zinjibar was seized by what the Yemeni government claimed to be members of Al Qaeda in the Arabian Peninsula.

However, whether or not militants seized the territory by force is unclear. Analysts and a defected general said there was no fighting, suggesting that Saleh had sought to create a diversion by handing over the territory.

“I can say with confidence that when the Saleh regime handed over the entire governorate of Abyan to extremists, the consequences were disastrous for civilians,” said analyst Al-Iryani.

Thousands of families from Zinjibar and surrounding areas continue to flee the fighting that now rages between the Yemeni government and armed militants, some even by foot.

“There are now over 30,000 people that have been displaced from Zinjibar and Ja’ar [in the Abyan governorate] and have fled into neighboring Aden and Lahj governorates,” said Col. Qasim Muhammad Hadi speaking from Aden, a Yemeni military commander and head of the Zinjibar security forces.

Aid groups are only now beginning to assess the damage and dole out aid.

A World Food Program report indicated that more than 40 percent of internally displaced people in Aden don't have sufficient access to food and 50 percent of shelters, which are mostly local schools, lack proper sanitation.

The same report indicated that malnutrition for children in also a concern and the WFP plans to set up nutrition screenings for children under 5 as well as begin cholera prevention efforts.

One Zinjibar resident, Nasser Mohammed Yaslam, fled the city with his family days after it was seized by gunmen. “We can’t stand being refugees, relying on the kindness of others to eat. We are jobless now and ashamed of ourselves,” he said.

“The military response was incredibly fierce. We ran from our homes as the fighting started and hardly had enough time to get dressed before we tried to get to Aden,” he added.

Yaslam blames the Yemeni government for not fighting the armed men as they have done in the past. “If the military had engaged these men, I would still be in my home,” he said.

As far as drone strikes and if they will help, Yaslam, now an IDP residing in Aden, said he didn't understand why Yemen allowed them in the first place.

“This is our land and we must protect ourselves,” he said.