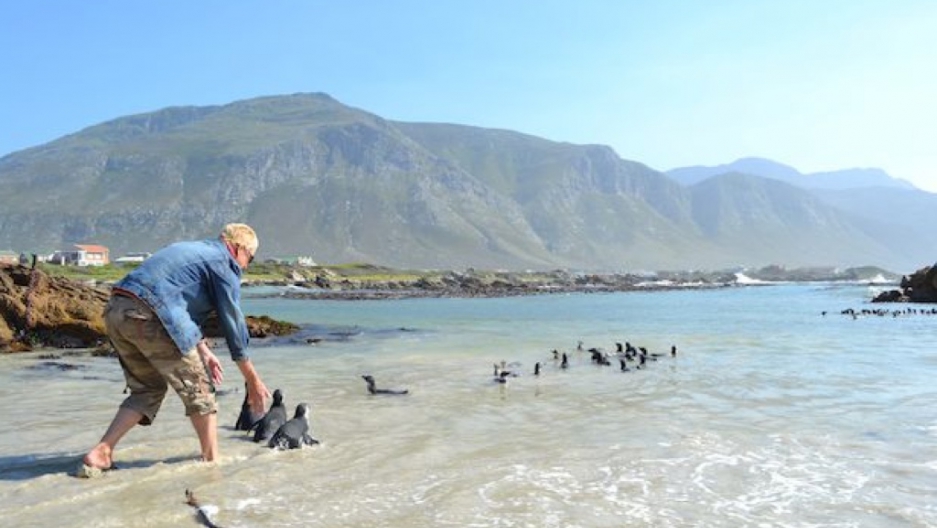 Hundreds of mature penguins in the existing colony lay out in the morning sun, oblivious to the 63 birds — adults first, then juveniles — who waddled out onto the sand and into the Indian Ocean. A handful of volunteers and onlookers showed up to watch the release.

The release of the penguins by the volunteers is part of the effort to boost South Africa's endangered African Penguin population, said Venessa Strauss, CEO of the Southern African Foundation for the Conservation of Coastal Birds (SANCCOB).

Cape Town's most famous penguin colony is at Boulders Beach which has a network of boardwalks and viewing points to protect the birds from humans and vice versa. Boulders drew some 88,000 visitors last year, says the National Parks service. Sometimes a few penguins will swim out to people at the next beach, or take a nip at a stray finger. The casual visitor would think that the penguins are thriving.

In fact the penguins are sometimes seen as a nuisance to people who live in neighborhoods near the few land-based colonies. More penguins live on nearby islands.

Despite their apparent ubiquity and undeniable cute factor, the African Penguin is in trouble. It was reclassified from a "vulnerable" to an "endangered species" in 2010.

At the turn of the last century, about 3 to 4 million African Penguins flourished along the coasts of South Africa and Namibia. By 2000, that number had dropped to 200,000 — and by 2010 the population had fallen to just 55,000. As the penguins don't fly, the estimates are considered to be highly accurate. Unless the decline can be halted, African Penguins are expected to be extinct in 15 years.

Like many seabirds, penguins are quite sensitive to environmental disturbances and are considered to be an indicator species — how well they are faring is a reflection of the health of the ocean overall.

Declining access to food is a major factor in the African penguins' decline. The pelagic fish — anchovies and sardines — that make up their staple diet are decreasing because they are very sensitive to the rising water temperatures linked to climate change.

Over fishing and predator seals are also increasing problems for the penguins.

Harvesting of penguin eggs and guano scraping, once busy Cape Town industries, have been banned here since the late 1960s. Until that time, collectors would take all the eggs they could find at the start of breeding season and destroy them — their customers didn't want eggs that weren't fresh — and wait for a second batch to sell. The birds would then rear the third batch, which was often laid too late in the season for survival.

No sooner were these protection measures put in place than a new threat emerged from oil tankers sailing around the Cape and leaving periodic spills in their wake. Once penguin feathers become slicked with oil, the penguins are no longer waterproof and they don't survive.

Right now, oil pollution is more of a risk than a reality. Still one bad oil spill could wipe out all the birds in the region — about half the total population, according to Strauss of the penguin conservation group.

Many baby penguins at Stoney Point were simply starving to death. The babies and some adults were collected at Stoney Point and hand-reared at the SANCCOB facility two hours away. The chicks typically had parents who were molting late in the season. Without feathers, the birds couldn’t swim, hunt or feed their babies.

Contrary to conventional thought, studies show that hand-reared chicks survive and breed as well as those who don’t. Human intervention has become increasingly significant as the penguins' overall numbers plummet.

Toward the end of last year, stakeholders from various sectors of South African society — scientists, NGOs, the fishing industry and government — came together for the first time to work on a biodiversity plan. The goals are to first stop the decline of the African Penguin and then to get the penguin population to grow by 1 percent per year. It’s a unique collaboration, but it remains to be seen if there’s the will or the time to help this species survive.

“A lot of people depend on the ocean for recreation, food and employment, and we have to manage the relationships between the ocean, animals and people,” said Strauss. “We as people have a responsibility to conserve this planet because it’s the only one we have.”