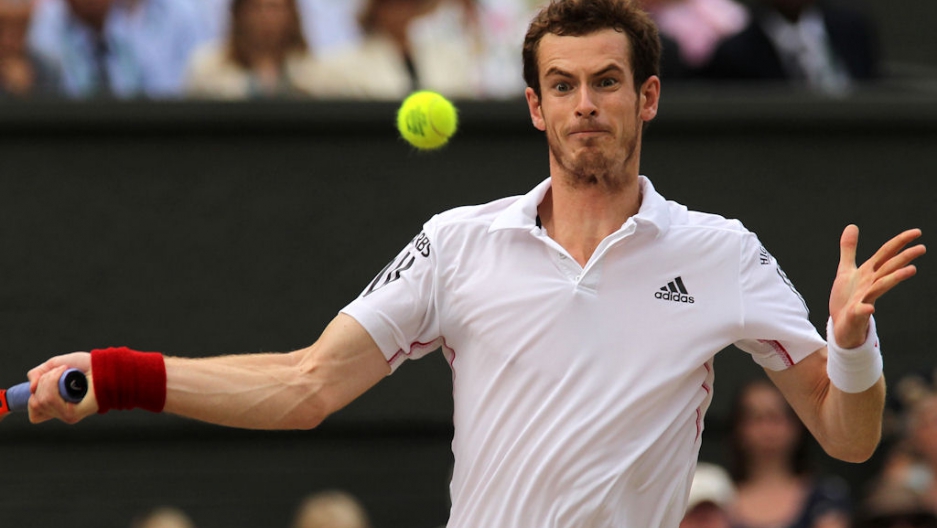 Britain's Andy Murray plays a losing match against Spain's Rafael Nadal in a men's semi-final at the Wimbledon Tennis Championships at the All England Tennis Club in southwest London, on July 2, 2010.
Credit: Glyn Kirk
Share

LONDON, United Kingdom — Wimbledon starts Monday and Britain is getting ready to celebrate a truly special anniversary — not. It's been 75 years since a British man, Fred Perry, won the world's most famous tennis tournament.

In addition to his own personal demons, this year's top British seed, Scotland's Andy Murray, will carry the weight of those 75 years of failure on to the court with him. It's part of the reason I can say with certainty that Murray, the number 4 seed, won't win this year. He also won't win next year. He won't win ever.

In fact, I can say with some certainty — after living here for a quarter of a century — that a Brit will never, ever win Wimbledon.

First, about Murray. It isn't the fact that he "comes along at a time when there are two sensational players in Roger Federer and Rafa Nadal," as Matthew Engel, veteran sports journalist and roving England chronicler for the Financial Times pointed out. "It's a horrendous weight" on British players that has nothing to do with sport.

Engel explained, "This is a country that is not interested in tennis. It is interested in Wimbledon." And Wimbledon is not just the world's most famous tennis tournament, Engel said, it is the heart of the brief period each year when this wet, gray island is truly "green and pleasant."

"Wimbledon is a symbol of English summer, a brief period of fine weather and long summer days," Engel continued. "They can still play at 9 in the evening with no lights. Strawberries are part of it, as well. The growing season is short and it peaks at the same time the tournament is played."

That is a nice interpretation — Federer, Nadal and Novak Djokovic are playing a tennis tournament and Murray is playing a part in some kind of modern Druid festival of the solstice — but there has to be a more down-to-earth reason for Britain's three-quarters of a century long inability to find a player capable of winning its own tournament.

Sports psychologist David Fletcher, of Loughborough University, Britain's center for the study of all aspects of sport, says that sometimes a home court advantage is really not an advantage at all.

"The enormous support you get playing at home is a two-edged sword," Fletcher said. "We saw this in 2008 at the Beijing Olympics when a number of Chinese athletes folded under the pressure."

Fletcher imagines Murray at a difficult point in a match when concentration wanders and dark thoughts of failure nibble at him. This happens in any tournament but at Wimbledon the British player also has to contend with the sense that he will disappoint the thousands cheering him and waving union jacks, not to mention the millions watching at home. It's one more little blow to his confidence.

The psychologist prescribes these remedies: "Visualization: imagine center court with union jacks waving, see it as positive. Self-talk strategies: key words you repeat to yourself during breaks. The Williams sisters do this. Focus on things you can control, like your nutrition when you change ends."

He has one final word of advice. "Block out the press." Good luck with that.

One of the core principles of Fleet Street, the collective term for Britain's newspapers, is build them up, then tear them down.

Mike Carlson, American expat and British sports television personality said, "When young British players first come on the scene Fleet Street hypes them. It's cruel to expect Tim Henman or Andy Murray to win Wimbledon when they're 20. They can't, they're not ready. Then they get branded as flops. The reality is they just aren't good enough."

Looking back at 75 years of failure, however, Carlson does not pin most of the blame on the press: "There is a systemic reason for the failure to produce a Wimbledon champion: No money has gone into grassroots player development. Decades ago the Swedes and the Czechs started massive programs, built indoor training facilities and so on, and for a time dominated tennis." No comparable commitment has ever been made in Britain.

That point is echoed by Alan Bairner, a sociologist specializing in the study of sport and national identity at Loughborough University. "We almost sit and hope someone will turn up and win," said Bairner. "The game is dominated by snobbishness and elitism."

British track and field was once plagued by the same problem but several decades ago the sports administrators made a commitment to the grass roots, embracing the new multi-ethnic Britain. British athletes have been a competitive force for a while now and Bairner believes comparable effort, reaching into all Britain's communities, will be required to raise a local Wimbledon champion.

The Murray situation has its own specific circumstance. It cuts across the resurgent fault line on this island between the Scots and the English. Scottish nationalism is a real political force north of the border, with a referendum on independence likely in the near future. "Wimbledon is about Englishness, more than Britishness," Bairner pointed out. In Scotland Britishness more and more means Englishness, with a high-handed attitude toward the Celtic people who share the island.

Bairner sees Murray's problem as less one of the weight of national expectation and more like that of Manchester United when they recently played Barcelona for the European Cup. "From their reaction to defeat," Bairner observed, "they clearly knew their opponents were superior and it was no disgrace to lose. Murray may have reached a point where he feels that it is no disgrace to lose to Rafael Nadal or Roger Federer. If that is in his head, he is in trouble."

Put all those explanations together and you begin to understand why I can say with certainty Murray will never win. But Matthew Engel doesn't agree with me. "Andy Murray will win Wimbledon," he asserted confidently. "After Scotland declares independence. So we'll still be able to say, no Brit has won the tournament since Fred Perry."

Alan Bairner is even more bullish: "I just have a feeling Murray will win Wimbledon this year."

But then, Bairner is a Scot, and he acknowledges he is rooting for one of his own.