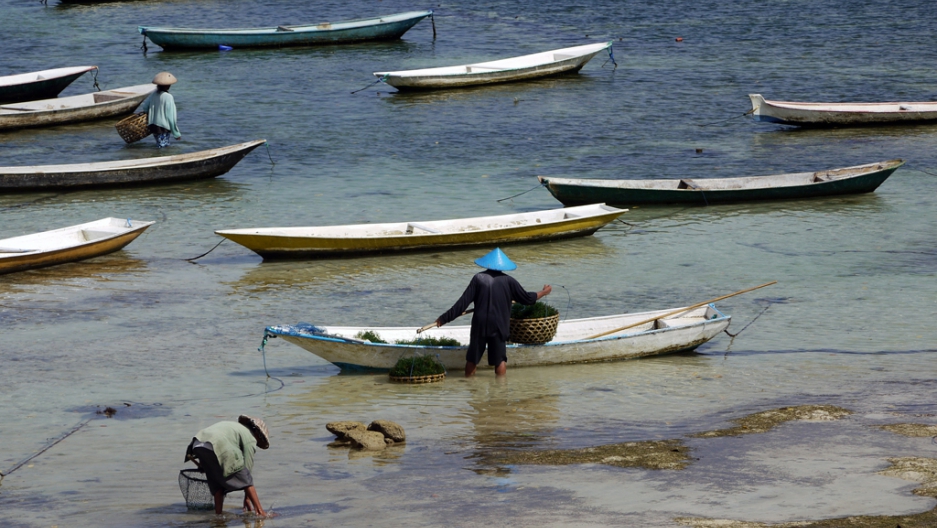 Several times a day women place the tiny canang on the altars of village sangka, or temples. It’s a Hindu tradition that charms visitors to Bali. But unlike the women there who benefit from employment in Bali's booming tourism industry, Astuti sees hardly any of the wealth wash her way.

Unlike Bali, Astuti's home of Nusa Penida has very little infrastructure. It is hilly and dry, with limited fresh water. Residents rely on nearby islands for food. There are few jobs and little schooling. Skin rashes, runny noses and undernourishment are common.

The stark contrast between Bali and Nusa Penida, islands separated by a 90-minute boat ride, illustrates a wealth gap that is one of the starkest in Southeast Asia. Though the number of people living below the official poverty line in Bali is among the country’s lowest, at less than 5 percent, it sits just next to the Nusa Tenggara islands, where nearly a quarter of the population are poor, according to official statistics.

In the dirt courtyard near her weather-beaten house, Luh Rumi rocks her 7-month-old daughter Ketut, who scratches absent-mindedly at the red rash on her scalp. Rumi says she thinks it’s an allergy, but she can’t afford to take Ketut to a doctor in Bali, where abundant health clinics with polished floors sit next to world-class restaurants that draw Indonesia's who’s-who.

As diners stuff themselves on the sea’s bounty, Astuti, Rumi and their neighbors make do with cassava and corn, the main crops on this arid island. Nearby, on Penida’s black beach, a favorite stop for speed boats from Bali, sniffling boys sell seashell necklaces to designer-clothed guests so they can pay for school.

The United Nations reports that half of Indonesia’s population lives on less than $2 a day, compared to only 26 percent in Thailand.

The middle class is growing fast, but for now it spends only slightly more than the poor (with purchasing power between $2 and $20 per day). Meanwhile the wealthiest fraction is known to benefit from political connections and the plunder of Indonesia’s natural resources.

Analysts say gross inequality is typical in developing countries where political elites have captured the government.

“Now everybody plays lip service to combating inequality, but there’s nothing in the policy that addresses that,” said Wimar Witoelar, a political commentator and spokesman for former president BJ Habibie. “For now we’re moving two steps forward three steps back. Economically we’re a thriving market; what we need to do is inject more good governance so more people can enjoy the spoils.”

Improving governance to deal with rapid growth and globalization was part of discussions at Monday’s World Economic Forum on East Asia, where business, government and civil society leaders discussed meeting the United Nations eight Millennium Development Goals, one of which is halving poverty by 2015.

“We can meet the targets, but it will need a huge amount of investment, both in infrastructure and the social sector, said Rajat Nag, director general of the Asian Development Bank.

Indonesia has made some progress on infrastructure through public-private partnerships, noted Vice President Boediono, but social programs still have a long way to go.

Persistent unemployment and a huge informal labor market are strangling innovation and productivity, according to an Indonesia Competitiveness Report drafted by the World Economic Forum ahead of the event. It also notes deep structural problems, such as high infant mortality and malnutrition that threaten the country’s competitiveness.

“Growth will not make any of these problems disappear and could indeed exacerbate some of them,” the report states. “With one-fifth of the population still living in extreme poverty and half barely above the threshold, rising inequality, and high prices for food, fuel, and gas, there is a risk of social unrest.”

Some, however, say the government is prioritizing investment at the expense of these goals.

“Unless the sustainability component is included in the measures of growth of the country then long-term growth will not be maintained,” said Abdul Halim, the marine program director for Indonesia at The Nature Conservancy, a global conservation organization. “The main capital of Indonesia is its natural resources; that’s where the growth of the country and income generation of millions is dependent,” he explained.

The Nature Conservancy is working with the Indonesian government mainly in the far-flung eastern part of the country to help establish marine protected areas that will support traditional economic activity while allowing for conservation.

In Nusa Penida, where Astuti lives, these areas allow for sustainable fishing and seaweed cultivation, which employs hundreds of workers in Penida and its sister islands Ceningan and Lembongan.

“Communities are involved in cooperatives and they’re very able to produce high quality seaweed for export,” said Rili Djohani, the director of the Coral Triangle Center, which is leading the conservation initiative in the Penidas.

Indonesia is Southeast Asia’s main seaweed producer, with around 3 million tons recorded in 2010 and exports targeted to double in 2011 as the government banks on increased demand from China for use in cosmetics, meat and medicine.

But an economy dependent on the bounty of the sea poses problems in an area increasingly threatened by environmental degradation.

Made Wati, a farmer, says damp weather keeps the seaweed from drying quickly and algae blooms during the rainy season harm the crop’s quality. A disease called ais-ais caused by regeneration of the same strain of seaweed also causes stalks to decay.

According to an assessment from the U.S. Agency for International Development, poor farmers attempt to grow seaweed year round so they don’t have buy fresh seed, which requires capital.

At the World Economic Forum delegates discussed the need to support programs that improve yields and irrigation and provide better market access for farmers. Agriculture employs 40 percent of Indonesia’s labor force, but it is also the sector with the highest incidence of poverty.

“Seaweed has been the main income of the majority of people in Nusa Penida for quite a long time,” Halim said, “and it’s one of the examples of what I mean when I say conservation has to benefit people.”

That means ensuring planting areas have good water quality, away from destructive practices, such as dynamite fishing that harms the sea’s fertility.

Officials say they recognize the importance of raising living standards in remote, underdeveloped areas, such as Penida and the Nusa Tenggaras, but their efforts have yet to convince people like Wati.

During harvest times she lives in a thatch hut on the coast of Lembongan with her husband and 13-year-old daughter, who also works in seaweed. She says it’s a comfortable life but not one without worries.

“The Indonesian economy is growing, but still we cannot hit our targets. Still we must work just to eat.”