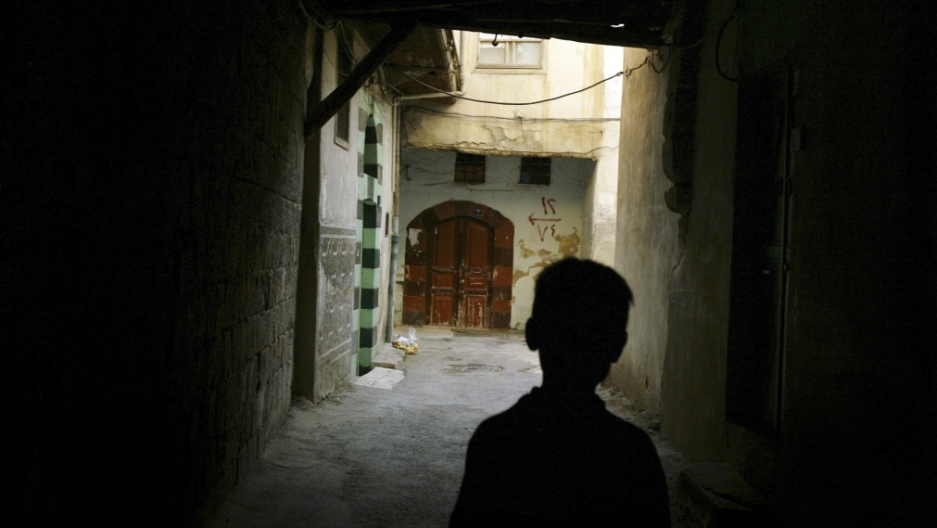 A Syrian boy stands at the entrance to a street on May 21, 2005 in the old streets of Damascus, Syria. At the time, Syrian President Bashar al-Assad had vowed to promote reform and fight corruption.
Credit: Ghailth Abdul-Ahad
Share

DAMASCUS, Syria — When you ask Syrians, few have heard about the hoax involving a lesbian blogger in Damascus named Amina Arraf, which was created by an American man living in Scotland. It is not important to them.

They are too busy monitoring protests, watching the government’s survivalist maneuvers and trying to make sure their friends and families are safe.

Yet the Arraf story has dominated Syria-related headlines throughout the world for days now. As death tolls began to seem repetitive, Arraf gave journalists a pretty protagonist to represent Syria’s oppressed populace. She was a sympathetic character with clear views and a penchant for hyperbolic language.

She was also fiction.

The hoax reminded the few journalists living inside Syria of the importance of nevertheless seeking out individual voices, so people overseas can identify with the real human beings living inside a country that is so mired in mystery, misinformation and violence.

Syria’s real-life young people have multi-faceted ideas based on their backgrounds and present concerns — the threat of death the most pressing among them.

The following is five profiles of Syrians who represent very different aspects of the population. Their names have been changed to protect their identities — one of the most suspicious traits of the imaginary Arraf was her brazen use of her real name and photo.

“Sometimes, with all that is happening now, I question my decision to stay here,” said Burhan Hatoom, 28, a cardiologist who works at a Damascus hospital. “I have no idea what the future holds for me now. At the same time, I know I can do more good by being here. This country needs doctors right now.”

As he sipped his cold al-Mazeh Lebanese beer outside a street café in the old city of Damascus, Hatoom ruminated on the limited prospects for his future. As a member of the half-million strong minority Druze sect, he said he feels “threatened” by the prospect of regime change that would empower the country’s Sunni majority. So he wants to leave Syria. He knows colleagues at hospitals in Missouri and Ohio, and could join them there, he said. But his parents and four siblings live in an apartment together in Jaramana, a Damascus suburb filled with many Iraqi refugees and people from various Syrian communities, where, as yet, no significant protests have taken place.

“We never know when it is going to start there,” he said. “And I can’t just leave my family behind.”

When Ammar Al-Saadi, left his Sunni neighborhood in Damascus to begin his obligatory military service in November, he said with a sigh: “So many people try so hard to avoid it; I am just going to get it done.”

At 20, this is his attitude — mature, realistic and responsible. He held no firm political views for or against the government; he was more focused on the immediate — helping neighbors with home repairs, working as a courier and caring for his widowed mother.

So Al-Saadi left his home and his job to begin training. Four months later, he was in Deraa as part of the military crackdown on civilians there. He was one of the thousands of conscripted young men who, regardless of their personal opinions, are sent to complete a grim task.

When reached by phone in early June, he was in Idleb province, where the government is now moving in to re-assert government control over several towns, including Jisr al-Shughour. The fighting has caused thousands of Syrians to flee to the Turkish border, where they now languish in refugee camps.

“There are many problems here. We keep telling the people — this is forbidden, you must stop — but they just won’t listen. We don’t know what to do,” he said with a pleading voice.

Rather than lament the experience or elaborate further (on a phone line that could be monitored by the Syrian security, which is common), he ended the conversation by insisting: “If you need anything, tell me and I’ll send my brother to help.”

Beyond the empty highway leading north out of Damascus, dotted only by the occasional truck, military checkpoint and roadside mosaic of late President Hafez al-Assad, is Bloudan. The town is set at the highest point in Syria, with views of mountains in both the Israeli-occupied Golan Heights and Lebanon visible from its precipice.

Joseph Skaf, 23, is one young resident. He commutes 50 minutes every day to his job as an accountant in Damascus. He is Christian, but the town is primarily Sunni and he says that he and his neighbors are “unaffected” by small-scale protests in the town of Zabadani in the valley below.

“Everything is fine here,” he insists, even though the summer villas throughout his town belonging to Gulf residents escaping their region’s oppressive heat sit empty this year.

Skaf is incredibly proud of his hometown, and he laments the future of this peaceful hamlet if the unrest continues to rise. He complains about the protesters' lack of organization and purpose, arguing that they are incapable of effecting positive change in the country.

"Most Syrians want things to stay the same," he said. In Bloudan, subtle changes are evident but so far the violence remains at a comfortable distance.

He is happy that necessary change is occurring, he said, while at the same time worried about the safety of his friends and family. The 25-year-old translator lives in Barzeh, a restive neighborhood north of Damascus, where he gathers for a weekly sahra — evening visit — with a group of like-minded friends, where they talk excitedly about the unfolding events. Sham TV, the network airing mobile phone footage of protests, frequently plays in the background.

“Look around the room,” he said one evening, pointing to friends. “Kurd, Alawi, Sunni — Fitna? What fitna?” he asks, referring to the Arabic word for sectarian strife, which the regime has used to drum up fear of the potential aftermath if it is to fall.

Several of their friends have been arrested and tortured. But they remain committed to seeing the movement through. Although Darwish does not attend demonstrations, he supports opposition figures and is constantly on Facebook, posting video and opinion articles.

“I’ve waited my entire life for this,” he said. “And I’m just glad it’s happening in my lifetime. This needed to happen. It’s hard. But it’s a good thing.”

Leila Haddad, 27, works in the housekeeping department of the Sheraton in Damascus. Nowadays, with hotel occupancy virtually at zero, she has no work and mostly stays home in her small house in the Christian quarter of Damascus’ old city. There, women in cotton pajamas sit on worn couches, sipping coffee and Argillah and talking about the conspiracy.

“Why are they doing this?” Haddad, who is the eldest daughter of the family, asked. “We know there are problems, but this is not the way.”

She is criticizing the country’s protesters for “attacking” and “killing” soldiers, a narrative repeated around-the-clock on the Syrian state television channel, which flickers on the television in the corner of the family’s sitting room.

She says she wants things to stay the same.

“Things were better before this all started up,” she said, arguing, cryptically, that if the late President Hafez al-Assad were still around "this would all be over already." In 1982, the late Assad crushed a Muslim Brotherhood rebellion by razing the town of Hama and killing tens of thousands of its inhabitants.