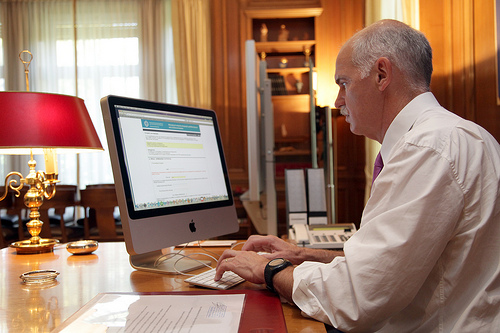 Share
Greek Prime Minister George Papandreou is desperately trying to keep his country's economy and his own government from disintegrating. The situation became somewhat farcical Wednesday when Papandreou stepped down briefly. "We had one for the Guinness Book of Records," said Constantine Michalos, chairman of the Athens Chamber of Commerce. "He resigned at lunchtime, and he was back hopping around at suppertime." He says the Greek government has already imposed one round of austerity measures. Now, he says, the politicians are trying to convince the Greek people to tighten their belts even more. The Greek people are having none of it. "The initial austerity package that was voted in back in May of 2010 brought us against a brick wall and a continuation of the same mixture of economic policy will not bring anything new or anything positive to the Greek economy," Michalos said. "And that's why we're all pressuring the government to change and renegotiate the terms of this austerity package." Protestors clashed with Greek police in the capital Athens Wednesday over this very issue. But elsewhere in Europe people are also pretty upset with the Greeks. "If the Greek government cannot agree on this program, then default is a real possibility," said Quentin Peel, international affairs editor at the Financial Times. "And there's a real backlash, particularly in northern Europe, in countries like Germany and the Netherlands and Finland, the taxpayers essentially are saying – do we keep pouring money into this bottomless hole?" The fear, though, is that without more bailout money, Greece's problems could spread to other Eurozone countries. Some worry that countries like Greece might be forced to leave the currency union. But there is strong political will to prevent that. French President Nicolas Sarkozy Thursday asked all European Union nations to step up to the plate. "What we need more than anything today is unity," Sarkozy said. "We need to defend our single currency and our European institutions. It is our duty to do everything to preserve the stability of the Eurozone because without stability growth will be impossible." Yaris Varoufakis, a professor at the University of Athens, says many in Greece are critical of European politicians. "They have a lot to answer for because what have they been doing over the last eight months?" Varoufakis said. "They have been dithering, even recently they have found it impossible to get organized and coordinate behind a common strategy for tackling what is effectively a Euro-system crisis and not just a Greek crisis." A wider European crisis could, of course, be disastrous for markets and portfolios across the globe. For the Greeks, time is running out. European leaders have given them until June 29th to come up with a cost-cutting plan. No plan, no more cash from the EU.