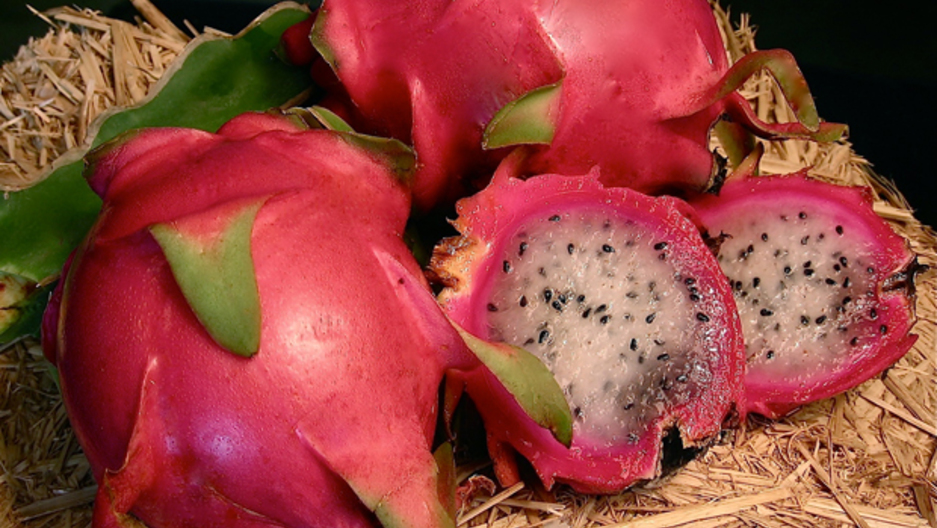 Share
By Britta Conroy-Randall In the kitchen of his Latin-fusion restaurant Alias on the Lower East Side of New York, Dennis Cooleen held up a spectacular, brightly colored fruit. "What I have here is a dragon fruit. A dragon fruit looks kind of like a pink and green … I need a minute now," he said. The dragon fruit is difficult to describe. It's about the size of a softball, oval shaped and heavy. Chef Marcelus Coleman came over to give it a shot. "It looks like something out of star wars, like Jabba the Hut would be eating. It's a pinkish red color with like little green leaves that are coming out of it, off of ridges," he said. Cooleen enjoys the vivid colors of the fruit. "Once you cut into it, it's black and white inside. It has the consistency of a kiwi but it has a pear-like taste," he said. The dragon fruit, or pitaya, is a type of cactus native to Central and South America and Asia. It's riding a culinary wave of popularity here in the US — flavoring everything from vodka to vitamins and even making an appearance on Top Chef. This is all good news for growers in Vietnam, the largest exporter of the fruit. The USA's Department of Agriculture signed a trade agreement with Vietnam to import the fruit in 2008. According to Vietnam's Ministry of Agriculture and Rural Development, last year's shipments to the US were 8 times that of 2009 and the number is set to double again this year. At the Hunts Point Produce Terminal in New York fruit distributor Felice Lamanna said he's seen a huge increase in demand for dragon fruit. "As soon as it comes in it goes out," Lamanna. "I supply some very large wholesalers, some big retailers. A lot of our customers do request it. Some things stay under the radar but this is always popping up." With that increased demand, it's not surprising that American farmers are trying their hand at growing the fruit. Outside Santa Barbara in Southern California, Jay Ruskey of Good Land Organic Farms recently took a gamble and added dragon fruit to his avocado and passionfruit orchard. "I realized once I took them to the farmers market and put 'em on the stand, they really attract attention," Ruskey said. "You can actually learn a lot about a customer based on the dragon fruit. But all in all I think people really enjoy it and they'll buy it just for the fruit bow." Dragon fruit's growing stateside popularity and surging market power can largely be attributed to its exoticness. The legend of how the fruit got its name does nothing to dispel that. It's said that long ago in Vietnam, villagers would find the fruit scattered on the ground after a dragon was slain. Fanciful legend aside, dragon fruit is off limits to most Americans. It can sell for upwards of $8 a pound. Fruit seller Felice Lamannas says that's too high for the average shopper. He's hoping that as American growers ramp up production, the price will come down. Right now, a lot of the expense is getting the fruit here from exotic locales. "We need to stabilize the price," Lamannas said. "They should be able to do it considering that there's a tremendous amount of money in freight here. We're paying for fuel, we're paying for jets, we're paying to unload. But if you can grow it here in the United States I think it'll become a decent item." Back in the kitchen at Alias Restaurant, Dennis Cooleen and Marcelus Coleman have added dragon fruit to this evening's menu. "We've done a late spring salad of strawberries, pistachios, pickled dragon fruit, fried shallots, pea greens and watercress," said Coleman. Coleman predicts the future of dragon fruit in the US will be as big and bright as the fruit itself. "In the food and restaurant business, they're always are looking for the next thing. It's kind of like whatever is in fashion and this is like the next food that's in fashion," he said.