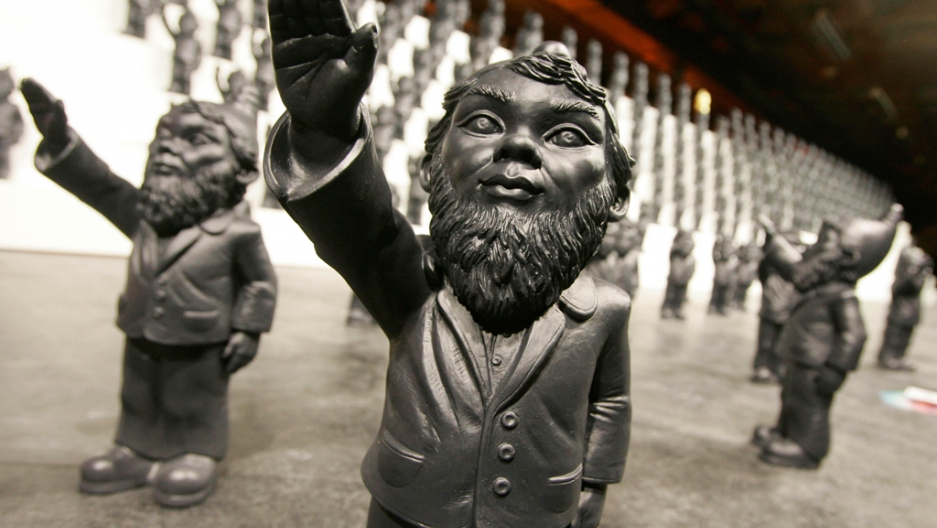 BREENDONK, Belgium — SS guard Fernand Wyss had a particular greeting for new inmates at the Breendonk concentration camp: “This is Hell and I am the Devil.”

He was no idle boaster. During Wyss' years at the camp north of Brussels, the burly former boxer earned a reputation for beating, torture and murder of prisoners.

Wyss was not, however, one of the black-uniformed Germans who supervised Breendonk. He was Belgian, a compatriot of most of the 3,500 prisoners sent to suffer and die in the grim former fortress between 1940 and 1944.

Some 400,000 Belgians were charged with collaboration with the Nazi occupiers after the country was liberated in 1944. Some, like Wyss, were executed. Others were jailed, fined or deprived of their civil rights.

Seventy years on, that legacy of collaboration has become the latest battlefield between Belgium's deeply divided French- and Dutch-speaking politicians.

Political wrangling between the two linguistic groups has left Belgium without a fully functioning government for a year, since elections on June 13, 2010. Now relations have been further strained by a bill presented in parliament by a Flemish nationalist party that seeks an amnesty for surviving Nazi collaborators and compensation for their descendants.

Previously such proposals have been rejected out of hand, but this year, with the country deadlocked by the linguistic dispute, mainstream Flemish parties from the Dutch-speaking north have used their majority in the upper-house of parliament to ensure that the bill will be debated.

“At a certain moment, we have to be adult and be ready to discuss these things and perhaps also to forget because it's the past,” said Justice Minister Stefaan De Clerck, from the center-right Christian-Democratic and Flemish party. “We have to forget certain things, that's necessary to re-establish society.”

Flemish support for the amnesty debate, along with the minster's comments, has provoked outrage among French-speaking politicians and Jewish groups in Belgium.

“For us in the Jewish community, like for the veterans of resistance movements and the former deportees, their can be no question of an amnesty. Our answer is: no, no and no, in any language,” said Henri Benkoski, first vice president of the Coordination Committee of Jewish Organizations in Belgium.

“It really worries and disappoints us that these big parties have done this for electoral reasons, playing one-upmanship with the nationalists. It's astonishing and shocking,” he told GlobalPost.

During World War II, thousands of Dutch-speaking Flemings and French-speaking Walloons risked their lives fighting with the resistance against the Nazi occupation of Belgium. However, others on both sides of the linguistic divide worked with the Nazis. Historian Chantal Kesteloot says those found guilty of collaboration totalled less than 1 percent of population.

Flemish nationalist extremists welcomed the Nazis, hoping they would end what they viewed as Flanders' domination by Belgium's French-speaking minority. Among Francophones, the Rexist movement gave Adolf Hitler fanatical support, recruiting 25,000 volunteers for a Walloon Legion that fought for Germany on the Russian front. Hitler once reportedly told Rexist leader Leon Degrelle: “If I had a son, I wish he'd be like you."

After the country's liberation, the restored Belgian authorities cracked down hard on collaborators. Almost 250 faced the firing squad and tens of thousands were imprisoned. Some 4 billion Belgian francs ($91 million by the exchange rate of the time) were seized from convicted collaborators.

While collaboration is still almost universally condemned by Belgium's French-speakers, attitudes in Flanders have changed. Many believe that a vengeful Belgian state was unfairly severe on Flemish nationalists who were not convinced Nazis but worked with the occupying forces in the hope of advancing their goal of independence for Flanders.

“In Flanders, numerous extenuating circumstances can be invoked to justify collaboration,” says the amnesty bill introduced by the Flemish Interest Party. “The repression that prevailed after the Second World War was without measure and without end … a pretext used to strike the Flemish movement.”

When the bill came up before the Senate last month, the Flemish Socialist, Liberal and Christian Democratic parties joined the nationalist parties in agreeing that it should be debated. Only the Flemish Green party joined French-speaking parties in voting against the debate.

The change in the mainstream parties' reaction can be explained by growing electoral support for nationalists who are split into the hardline Flemish Interest party and the more moderate New Flemish Alliance, which emerged as the Flanders region's biggest political force in last year's vote.

“On the Flemish side the question has always been sensitive, because there is a question of political heritage,” said Kesteloot, a specialist at Belgium's Center for Historical Research and Documentation on War and Contemporary Society. “But there has been a change. We are in a situation today where the parties are all afraid of appearing insufficiently Flemish, being seen as bad Flemings can play very heavily against them.”

Breendonk concentration camp is now a museum. Its gallows, torture chambers and tiny, airless punishment cells stand as a heart-rending reminder of the atrocities perpetrated by Wyss and his fellow guards, both German and Flemish. A plaque placed just beyond the barbed-wire fence in 1946 says the place should remain as a “perpetual” memorial to the 285 prisoners killed there.

Benkoski, however, fears a dangerous eroding of the collective memory.

“My parents and grandparents were deported, and people like me cannot accept that the people who collaborated with the Nazis during the war are amnestied," he said. "Now the last witnesses of that time are disappearing and instead we're left a new generation of cold-hearted historians. We have to be vigilant, if not the Shoah and the Second World War will just become another part of history, like World War One or Napoleon or the American Civil War.”