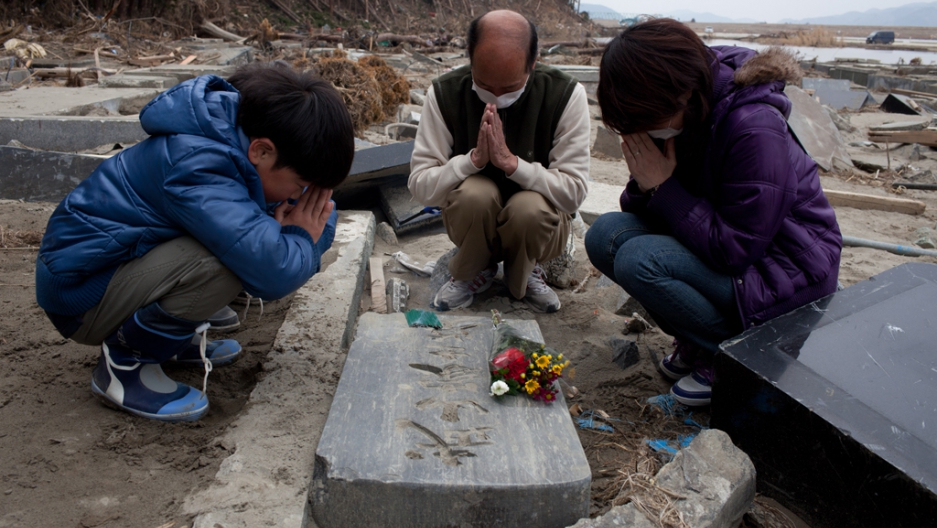 A month after the tsunami devastation, a family prays by a grave in Ishinomaki, Miyagi prefecture on April 11, 2011.
Credit: Yasuyoshi Chiba
Share

ISHINOMAKI, Japan — At an evacuation center in this coastal neighborhood, survivors of the March 11 earthquake and tsunami sleep on blankets surrounded by cardboard boxes. Short stacks of blankets help separate one family's area from the next.

There isn't much privacy and there is precious little space. But despite these cramped, sparse conditions, Kimiyo Ohashi says moving away is not an option.

“I would never think of leaving,” Ohashi said, offering visitors coffee out of a vending machine in the gymnasium-turned-shelter. “It’s my hometown.”

Ohashi, a 68-year-old retired salaryman, lost his home and all his belongings when the tsunami swept through. He is part of a large group of evacuees who have decided, despite hardship, to stay put in the days and weeks following the tragedy.

Not far away, engineers are still struggling to prevent a nuclear meltdown at the Fukushima Dai-ichi power plant, but the dangers less than a hundred miles away don't deter everyone. The ties that bind people to their hometowns in rural Japan are many and layered. Through tragedy they have proven durable.

The word "hometown" — or "furusato" in Japanese — has a special meaning for those who live in the small villages in rural Japan. It evokes not only a town, but the nature and landscape surrounding it. Many families have lived in Ishinomaki for generations, and say they can't leave where their ancestors are buried.

Ohashi has chosen not to move further inland or to big cities like Tokyo or Osaka, which set up hotel rooms and housing for tsunami victims.

Soon after the twin disasters, an upscale Tokyo hotel and the Tokyo metropolitan government joined forces to open up 700 hotel rooms for evacuees. But a month later, only 30 percent of the rooms were full. By mid-June, that figure was just under 60 percent, according to Tokyo officials.

There are 94 evacuation centers in Ishinomaki, according to officials, that house nearly 6,500 survivors. Out of an original population of 163,000, about 3,000 people died in the disaster and another nearly 3,000 remain missing.

Keiko Hoshi, a mother of two in her late 30s, now lives inside Minato elementary school in Ishinomaki, where classrooms have been converted into sleeping quarters.

Inside one classroom, a young girl sits at the teacher’s desk with coloring books, a man listens to the radio and a couple reads the newspaper. Wet clothes are hung to dry from the windows, and stacks of blankets, tissue boxes and fans fill the room. Large round classroom tables are piled high with of hotpots, portable stoves and cooking utensils.

For Hoshi and her daughters, age 11 and 13, the only way to get through three months in a shelter like this is by forming friendships with the dozen others who live in the same room. She’s organized arts and crafts activities for the children.

“We’re like family,” she said, when asked if the lack of privacy is frustrating. “We all help one another.”

Like the others living in the shelter, she said she and her family plan to rebuild their lives in Ishinomaki.

Many evacuees spend the days clearing debris from homes that were engulfed by water but remain standing. Others, who lived closer to the coastline, still make frequent trips to their destroyed homes to look for their belongings.

And then there are the most unfortunate ones, like Satomi Oizumi, whose house was completely wiped away. She and her family of five are staying with her sister in Sendai, but she comes back regularly to visit the wasteland where her home once stood.

She says it's a way to preserve her memories of the place that is now just cement blocks and wiring. She doesn’t want to forget the home where her family lived for 26 years.

“The memories all come back when I visit here. In a way, I don’t want to come back, but I’m drawn to this place,” she says, as she stands next to the remnants of her home, looking out in the distance at tractors clearing away the wreckage.

Many are hopeful that wedding albums and other personal mementos will still turn up. Inside a community building across from one evacuation center, local residents look through stacks of water-stained photographs, family altars and photo albums recovered by Japanese Self-Defense forces in the disaster zone.

In Ishinomaki, families rely on each other — now more than ever. Hitoshi Yamanobe, a gardener born and raised in Ishinomaki, says ties among residents had weakened over the past 40 years.

“However the earthquake changed all that,” he said. “Now people are closer than ever.”

It's the kind of closeness that wouldn't exist if families up and left for the big cities, where they’d be outsiders, he said. “We have our own dialect, or way of speaking."

Yamanobe said his ancestors’ graves are behind a temple in Ishinomaki’s port. In rural Japan, people believe it’s their duty to take care of their ancestors’ land.

There are also logistical reasons for staying put: there are government-issued payments coming their way, and lost brith certificates that need to be reissued.

Central Ishinomaki is a ghost town full of shuttered stores, defunct traffic lights, broken windows and few pedestrians. But the evacuation center inside Minato elementary school is abuzz with activity.

Dozens of people go about their business, sitting on tatami mats, watching television and knitting. Mainly, though, they are waiting, waiting for temporary housing assignments and the eventual re-building of their city.

“It will take several years,” said Yoshiaki Shouji, a local city council member. “But we plan to stay here until that happens. We will keep improving our conditions.”