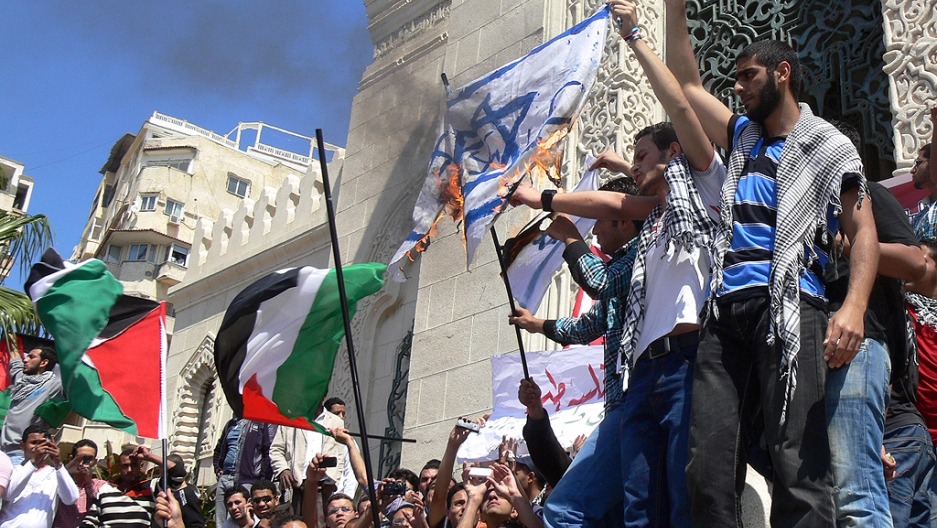 Protesters hold up the Palestinian flag as they burn the Israeli flag during a rally to mark the 1948 creation of the Jewish state known in Arabic as the "nakba" or "catastrophe" in the Egyptian coastal city of Alexandria on May 15, 2011.
Credit: -
Share

An Israeli man detained by Egyptian security services in Cairo on Sunday, charged with spying for Israel's Mossad intelligence service, is also an American citizen, GlobalPost has learned.

Grapel is suspected of being a spy in Egypt "with the aim of harming its economic and political interests," according to the Reuters news agency, which cited Egyptian state media.

A state-run newspaper reported that Grapel was carrying a laptop and three cell phones "containing top-secret information that would have harmed Egypt."

"[Grapel] allegedly was sent to Egypt by the Israeli government, tasked with taking advantage of the security vacuum in the country following the January 25 revolution and instructed to recruit others to acquire military and political information," reported CNN, citing a spokesman for Egypt's general prosecutor.

Israel's foreign ministry is currently investigating reports of the capture of an alleged spy.

The U.S. Embassy in Cairo confirmed on Monday that the American/Israeli dual national was in custody of Egyptian authorities.  An American consular officer visited Mr. Grapel on Monday and confirmed that he was in good health, according to a written statement provided by American officials to GlobalPost.

According to the U.S. Embassy in Cairo:

"We have confirmed that Ilan Chaim Grapel, age 27, is a U.S. citizen and was detained on June 12, 2011 by Egyptian authorities.  As is the case with all U.S. citizens arrested overseas, consular officers visit the detained citizen, work with local authorities to make sure he is being treated fairly under local law, provide information about the legal system, and facilitate communication with family and friends in the U.S."

Grapel's mother, Irene, who lives in New York City, told GlobalPost her son is a dual American/Israeli citizen. An employee at the Cairo hotel where Grapel was staying confirmed that the man checked in on a U.S. passport with valid Egyptian visas.

Grapel was visiting Cairo for the summer, according to Irene.  She said there was no way her son could have been fomenting discord during Egypt's revolution.

"He only arrived in Egypt on May 10th," said Irene via telephone. "So he was no where near Tahrir Square during the revolution."

Grapel is a student at Emory University's School of Law in Atlanta, Georgia.  He came to Egypt to work as an intern at a Cairo-based non-profit organization that provides legal assistance to refugees and asylum seekers, according to Irene.

An Egyptian newspaper published pictures from Grapel's Facebook account showing the man posing in a soldier's uniform, reportedly for the Israeli Defense Forces.  Irene confirmed that Grapel - as most Israeli citizens are required - performed his compulsory service to the IDF.

Grapel is not the first alleged Israeli spy accused of being sent to Egypt.

The regime of former president Hosni Mubarak, who was toppled on February 11 after widespread street protests, used state television to accuse foreigners of instigating the January uprising.

Last year, an Egyptian official stirred controversy after claiming that Israel's Mossad could have been behind a spate of shark attacks off Egypt's southern Sinai coast.

Egypt was the first Arab country to sign a peace treaty with Israel in 1979.  Since then, however, relations between Egypt and its neighbor to the north have been chilly at best.

Many Egyptians disagree with their government's sale of natural gas to Israel, believing that members of Mubarak's regime profited illegally by selling it at a discount.

Israel receives nearly 40 percent of its natural gas from Egypt.