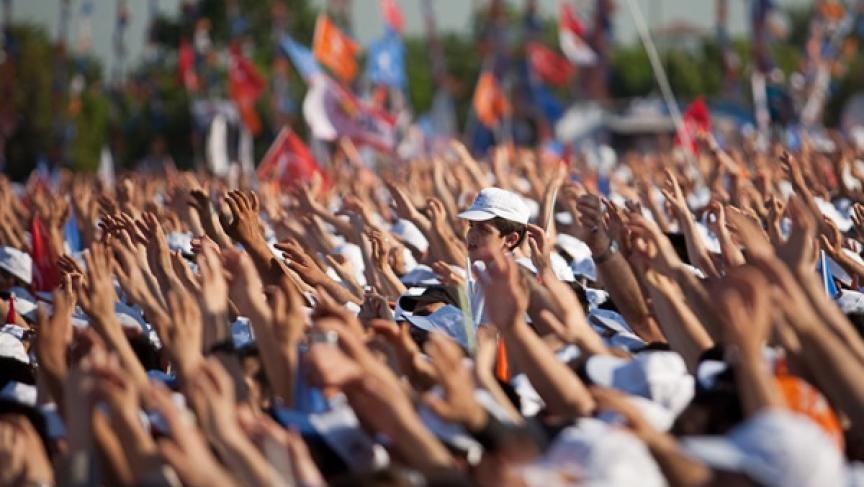 Share
Prime Minister Recep Tayyip Erdogan may well be the most successful Turkish politician of the modern era. In a recent stump speech, he asked voters for a free hand to change the constitution. With two-thirds of the seats, the AKP would be able to do that without any input from other parties or the public. "If we come to power with more than 367 seats, it'll mean that the public has given this duty to us," he said. "We'll make our preparations and show our work to the parliament. Come join us, let us work together." The AKP's popular mandate has increased by leaps and bounds since it was first elected in 2002. But it is unclear what the government plans to do with its increasing powers. Istanbul-based analyst Andrew Finkel said the dilemma of Erdogan and the AKP is much like that faced by Frodo Baggins in the Lord of the Rings. Staring down into the fires of Mount Doom, Baggins hesitated to throw away the ring of power. "So they've got all this power to themselves. Now they know, just like Frodo knew in the Lord of the Rings, that when you have all this power on your finger, the thing you should do is throw the ring into the fire. But of course, once you have this ring on your finger, it's really nice to have all this power," Finkel said. Erdogan and the AKP are credited with increasing democracy by eliminating political interference from the military and state bureaucracy. But the Prime Minister is famously intolerant of criticism and tends toward autocracy. At a AKP women's breakfast campaign event in the wealthy seaside neighborhood of Moda, first-time candidate Meltem Gurler said she is clear about her priority if she gets elected. "The new constitution," she said. "Because it is the major issue of the new parliament. The first civilian constitution of Turkey." Gurler said fears of an AKP-imposed constitution are nonsense. She said Turks will be asked what kind of constitution they want. "I think we should listen to the other parties as well, because we need a consensus here, we really need a consensus. It is not so fair to do it by ourselves," she said. The music coming from an AKP campaign truck is loud, but it may be reaching deaf ears in Besiktas, a leftist working-class neighborhood in Istanbul and opposition stronghold. The name of the song translates roughly as "AK Party, no matter what." Sitting on a park bench, Fethi Satilmis said rewriting the constitution is a big job. It needs to protect the rights of Kurds and everyone in Turkey. He said the AKP is not up for the job. But Can Paker from Istanbul think-thank Tesev, disagrees. He said Turkish politicians will listen to the people, sooner or later. "I don't look at the leaders or the leaders of the parties; I look at the society, because the parties and leaders of parties will eventually do what the majority wants, because it's their business to stay in power," he said. Paker said Turkey has changed a lot since the military coup in 1980. The majority of its citizens can no longer accept a constitution which protects the state from the people instead of the other way around. That's due largely to the dramatic growth of the middle class. The AK Party is currently polling 45 to 50 percent of the votes. But the final distribution of seats depends on the performance of smaller parties in this weekend's contest.